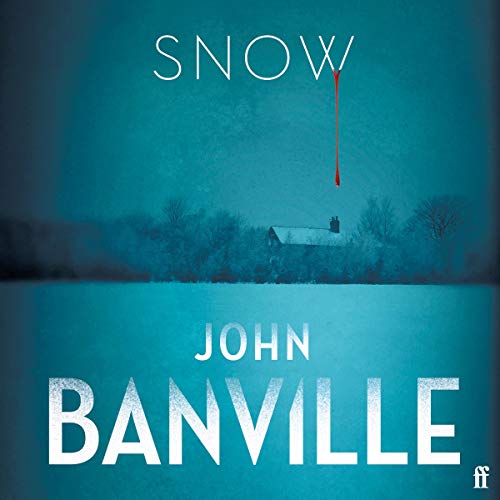 'The body is in the library,' Colonel Osborne said. 'Come this way.'

Following the discovery of the body of a well-loved parish priest at Ballyglass House - the Co Wexford family seat of the aristocratic, secretive Osborne family - Detective Inspector St John Strafford is called in from Dublin to investigate.

Facing obstruction from all angles, Strafford is determined to identify the murderer. But, as the snow continues to fall over this ever expanding mystery, the people of Ballyglass are equally determined to keep their secrets.

What listeners say about Snow

Nothing new or interesting here.

No doubt that John Banville is a wonderful writer. However, Snow simply doesn’t cut it, especially in comparison to his other works. What starts as an intriguing whodunnit quickly descends into a long, tedious and ultimately fruitless saga about catholic priests doing what they always do. From the inciting incident it’s pretty obvious to guess what happened, which is why I was hoping some twists and turns along the way. Unfortunately it’s just a straight line to the bleeding obvious.

The plot became predictable very rapidly. The characters and their behaviour unbelievable. Such a shame.

A treat for Benjamin Black fans..

John Banville has written detective stories for many years using the nom de plume Benjamin Black, but has come out of the shadows with Snow. It’s great to be reunited with Inspector Strafford, a terrific character, from BB’s previous country house mystery, The Secret Guests. We are also given tantalising glimpses of Chief Superintendent Hackett, with whom readers of Quirke will be familiar, and Quirke himself, although he remains, infuriatingly, off-stage. John Banville has great fun playing with the country house genre “.. ‘It’s a library. It’s an actual fucking library, and there’s a body in it... ‘“ and drops some sly references to other Irish greats of the past. There’s a host of beautifully-observed characters and much dry humour, which is brought out brilliantly by Stanley Townsend. He’s a superb narrator, with impeccable timing and a wonderful range of accents. I could listen to him reading the telephone directory.. It’s all thoroughly enjoyable and atmospheric, and whodunnit and why they dunnit is signposted in letters ten feet high. This doesn’t matter, because the whole is so good, but the reason behind the murder is wearyingly predictable. John Banville’s apparent obsession with the damage wrought by the Catholic church in Ireland would appear to have some way still to go..

Wonderful sense of place and totally atmospheric. Banville at his best and beautifully read. I was actually sorry to finish it.

As a selective daily Audible listener I was extremely disappointed by this title.... so much so that I can't even listen to anymore of it. I've read and enjoyed other books by John Banville and was so looking forward to this one. I feel that it might have been a book to Read as opposed to Listen to because the descriptive text would stimulate ones imagination, where the over 'Oirish..... cows in the parlor' interpretation of the deliverer took away from the story..... In addition to this ... I found the description of the very basic sexual encounter between the daughter of the house and the stable boy to be 'stomach turning' .... I am not a prude and would enjoy tastefully treated passages of this nature. I also feel if it were in book form one could skip such passages if one so choose where it is difficult yo do so in an audio book. I have neither the desire, inclination or the time to waste on finishing this book

How effervescent and entertaining this novel is making the rather splendid writing seem to be effortless. Yes, we’ve heard the story many times before but the combination of such lyrical, engaging storytelling and the addition of such a whimsical and talented voice actor was so welcome during unique times. And it felt really cold and full of Snow.

well read and written but no surprises in this telegraphed who and why dunnit.

Stanley Townsend narrates this murder mystery with his beautiful mellifluous voice. Could listen to him reading anything but this is a good story sparingly written, lovely descriptions of a time and a generation gone by. All the social Anglo Irish and rural Ireland mores neatly noted, fully deserves five stars

A gripping tale, with vivid characters and plenty of twists and turns. A great audio book.