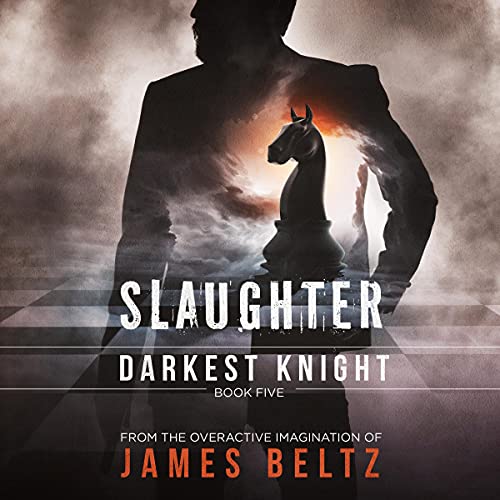 Shortly after the inauguration of a new President, there's an attack on the White House. Another country has crossed the line thinking they wouldn't be caught. The US intelligence services are good at their job, however. The evidence is clear and the war drums are beating. There's just one problem. The President doesn't believe them. He's suspicious that the United States is being mislead and lured into conflict. He quietly enlists DJ and his team to run their own investigation. What the off the books team discovers is a conspiracy that no one could suspect. With no help or support, cut off from communications, DJ must not only unravel the mystery, but stop the threat and drag the US away from the brink of World War 3.

DARKEST KNIGHT is Book 5 in the DJ Slaughter series by by James Beltz. One of the least unlikely events in the novel is a Slaughter's pregnant wife's water breaking in the White House oval office. It's a fun ride! Narration is excellent.

These Slaughter books are a favorite. I like that the author keeps it clean and I would have no problem letting my kids listen or read these books. With that I enjoy them as well, right behind Jack Reacher, Gray Man and Mitch Rapp.

Sucked - End of the series I assume. If not, I don’t think I can handle another like this one.

The worst of an already mediocre series

The author is plagued by the lack of an editor and the full weight of that is on display in this book.
Several storylines are abandoned midstream leaving the preposterous tale never reconciled. At least in this installment, the ambient noise from the lack of a studio for the recording seems to have been corrected.

I was taken out of the story because of the sci fy elements. A sentient evil computer!? Come on, this does not belong in a Slaughter story.