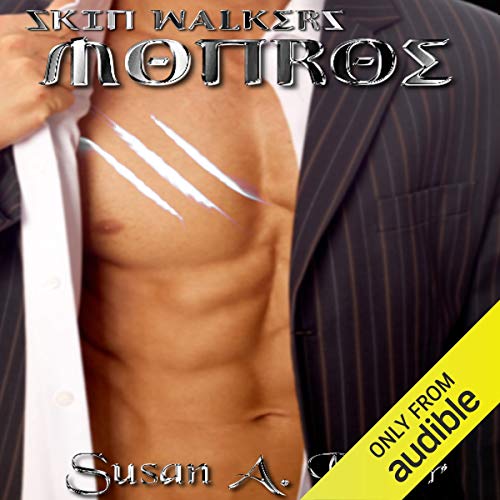 When Game Warden Eden St. Cloud goes up against CEO Monroe StoneCrow, she encounters the most intimidating, powerful, and sexy man she's ever seen. Unaware of the fact that Monroe is the Dominant Skin Walker in North America, it isn't until Eden becomes enmeshed in his life that she realizes it's too late to escape. Worse, she's drawn the children under her care into the lair of the beast and must now succumb to Monroe's desires or risk losing her children forever.

CEO Monroe StoneCrow is a man tormented by his obsession with creating a haven for his Skin Walkers. Determined to form a community where his Walkers can exist in peace, he has no time or desire to seek out his own mate, his angel. When Eden St. Cloud crosses his path, there is no denying his instant attraction, or his overwhelming animalistic urge to claim her. His affliction is so intense that even his own medical experts are at a loss to ease his symptoms. With his Skin Walker refuge in danger of collapse due to his preoccupation with Eden, Monroe is stymied by his inability to do what he's always done...simply take what he wants.

Monroe is a very Hot and Alpha Dominant Skin Walker that can change into an animal at will... Eden, who is a very strong willed lady, is a Game Warden for the State's Dept of Fish, Wildlife and Park and is is also considered a law enforcement officer... Put these two together with a bunch of friction, animosity and sexual tension then watch the Sparks Fly...

I really enjoyed this book. Susan Bliler is a new author for me and i will defiantly be grabbing the rest of this series once released on Audible. It's a bit of a shame we didn't get to start this series from the first book in the Skin Walkers series...

Not bad if u like alpha male tales-which I do

I liked the story, although short, was fairly well done. The skin walkers were a change from your typical shifters. Monroe was good in that he was definitely alpha, but not always perfect. The female was a little too perfect to believe at times though.

I find the narration can either make or break a story. This narrator could have been better if She didn't put the intonation she uses on the end off her sentences. It reminded me of Anne Flosnik, who irritates me to no end for this reason. A great narrator can make such a difference.

Do you think Skin Walkers: Monroe needs a follow-up book? Why or why not?

There is definitely potential there, but I would only listen to it if it was done with a different narrator (tho this one would've been good without the weird emphasis she uses on the last word of each sentence.

I love this book and the series, interesting concept well written. My big problem here is that there is a huge gap in the series where the books from 3 to this book is are out of print. Wish audible had more of this series.

A new were-shifter community has arrived (lucky us) as it's got some super-sexy Alphas, a decent plot and hot sex. However, Audible sometimes release books out of order and this is actually book 4 of the Skin Walkers series but you'd never know as the story can easily be a stand alone listen.

Feisty, stubborn Game Warden Eden and an uber-controlling, confident, arrogant, handsome, rich multi-wereshifter Munroe (who's the Dominant over all of the North American Shifters) go head-to-head and, at first, they battle, argue and the friction between them is intense. But when they eventually warm to each other and the sexual chemistry becomes too much then it's clothes off as the Game Warden becomes fair game in a hot, passionate and very needy way because the collar round Munroe's neck has just announced that Eden is his mate and he's desperate to claim what's his.

Good secondary characters - especially her children and an enjoyable, if slightly flawed, plot which tells of sacrifices made and the power that love has in all it's forms. Strong language, including the four letter C variety, narration was ok but lots of gasps between sentences however hero's voice was sexy and there were sexual dom/sub scenes as a strong very Alpha male meets his fated Angel.

Worth a credit? Although Munroe was a jerk to begin with thankfully he redeemed himself half way through into a loveable caring hero (who's an animal in the bedroom) which easily made this a creditworthy listen and I will watch out for future books.

wanted to love it. Ended up in disgust

1. Disgusting dominating sex monologues and weird conversations about being forced into submission on all 4s giving me what I want at any time but "you'll live it. I promise"

2. Author tried to overcome instalust/instalove by having the whole thing play out over a few months, which I appreciate! however, the main characters didn't have enough page time where they're actually getting to know each other. it went from
I hate you to why are you keeping us here to I just want to be more for you.....her words not mine.


3. He literally wouldn't let her leave. The male character said he would chase her down and fuck her wherever she stopped. including in front of her kids by the tone of it and still you end up crying and worrying that you're not enough!!

4. Dont even get me started on the shifter knowledge plothole. I swear that must have been overlooked in editing. she's native of course she's heard of shifters. her words not mine. she has seen her kids shift and even consoled them when scared but she can't believe they are shifters? why not?

5. Not the worst part but certainly very annoying.....things happened without explanation leaving the reader to deduce and we are smart so we do. next thing you know the author explains the whole of what just happened! we dont need that!

main characters have a whole scene proving how savage the male can be by taking some actions great! then the very next chapter explains how savage some males can be???? backwards and not needed.

lastly he is a shifter. a man who turns into animals but the way he is written is as if he is some wild beast with a human penis.

I wanted to love this. I ended up hating it turning it off on my way home and pulling over to write thos review. Not for me or anyone who likes a little romance with their shifter sex.

AWESOME! A MUST READ!

perfect mix of alpha male sequel magnetism and love connection. if you like your books saucy, but also a real connection between the characters, this is the book for you.

The story was good but unfortunately the narrator could have been better. She constantly took a audible breath at the end of EVERY SENTENCE, drove me nuts lol but not so bad to not finish.

The main characters are not very likeable and the chemistry between the two seemed very forced. I did like the story but didn't care for how much of a jerk the H was through most of the book. The h fell from any positive feelings from me when she made a TSTL move to save a wolf in treacherous conditions knowing that she was the sole provider for 4 adopted children. Everyone says don't do it, she acts like a spoiled child with a chip on her shoulder and does it anyway... really?

Brief Summary: No need to expand on the author's summary.

NOOOOOO! I NEED MORE OF THE SERIES

Why is this the only book in the series on audio??? Thos book was fantastic! I love the characters and the storyline was on point. Pleeeeaaase I need the entire series!

This had so much potential to be a great read, but the gaps in time and the lack of real connection of the main characters made this just okay. potential steamy moments, but definitely fell short. the narrator was okay as well, not great, but not terrible either.