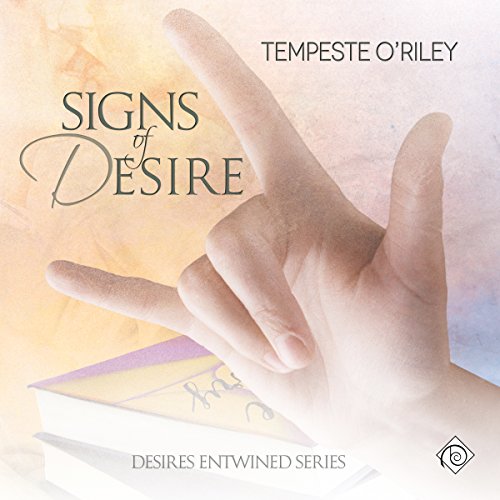 Simon Tyler knows his job as a gay romance author makes his lack of faith in love more than a little ironic, but he's tired of being used for his wallet. When a night out turns into a matchmaking scheme orchestrated by his best friends, Simon's not thrilled, but since he's not the target and he's sworn off happily-ever-after anyway, he goes along with it...until he meets Adrian, the object of their efforts, and finds perhaps he hasn't given up on love after all.

Professor Adrian Keys has tried to date Hearing men before, but being Deaf himself, he's never had any success at making a connection. After his friends con him into going out and Adrian realizes it's all an elaborate plan to set him up, he braces for yet another failure, only to discover there is a spark - except it's not with the man his friends had in mind, but with Simon Tyler instead.

Not all their friends have found a way past their romantic failures, but Simon and Adrian might be on the path to happily-ever-after.

What listeners say about Signs of Desire

My favorite in the series, passable narration

I really liked Adrian as a character and thought that all the information regarding being Deaf was fascinating. I thought Simon’s willingness to learn ASL and Adrian’s appreciation of that fact was perfect!

I thought Simon’s parents situation was a little odd, I wasn’t exactly sure how his sister fit into things or why she was acting so crazy, but I get that the story needed something to give it a little conflict and her shenanigans did that.

It was nice seeing the other couples again and I thought that the amount of sex was actually pretty appropriate given how slow this couple was to even move toward physical intimacy.

I really enjoyed this and again, that this was my favorite of the series.

Jeff Gelder narrated the others in this series and I have to say that I just didn’t find his narration all that good. I think Adrian really deserved some sort of alteration to his voice – or at least an attempt at some sort of modulation – to illustrate his lack of hearing. When all the guys get together the voices begin to blur and it wasn’t always easy to discern which of them was speaking. I think Jeff Gelder tends to be sort of “flat” in his narration and though he isn’t hard to listen to, he doesn’t really add to the overall experience. If you need to listen, rather than read this, it’s a passable narration, but it isn’t necessarily the best way to enjoy this story.

I have many weaknesses and many loves. And one of them is for stories with disabled main characters. Their stories always inspire me, leaves me in awe of their strength - no matter the disability. And it makes me humble, and so very grateful for all the things that I take for granted - listening to audiobooks being one of them. Adrian Keys is far from happy when his best friend cons him to tag along to a night out with some of his friends. Friends he's never met before. And not only that, he later discovers that said best friend has set him up. Only things doesn't really turn out the way anyone planned - for any of the involved. The set up was a no go and a fail, at least in the sense of the intended "victim". The romance writer Simon Tyler though is very fascinated, and there is a spark that cannot be ignored. Simon Tyler does not believe in that elusive happily ever after. After one too many boyfriends using him he's sworn off love and relationships. Still there is something about Adrian that he's drawn to. Making him question his decision of giving up on love. I liked Simon and Adrian, and I loved how Adrian's deafness was never an issue between them. That the language barrier was as simple to solve as Adrian taking ASL lessons and learning to sign. It was never a question, of if he should do it, it was just a natural progression to their evolving relationship. And I loved how Adrian was never treated as less, less of a human just because he was hard of hearing. The couple had chemistry from the first night they met and that was never the issue. What they did have to work on were their respective preconceived notions. Hang-ups from lessons learned from the past. Simon trusting another person not to use him, but loving him for who he was. Adrien realising that his lack of hearing was never an issue for Simon, just a fact. Still new relationships needs work, and these two made it seem, not effortless, but not overwhelming either, This was my first book narrated by Jeff Gelder, and while I wasn't blown away by him, I can't say that it was bad either. He had some change in his voice for the different characters, but it still wasn't enough all the times, especially when there were a lot of people speaking at once. Another thing I did want was some kind of change in his voice for when Adrian was speaking, just to anchor the story to the narration a bit further. I don't mean adding a robotic voice or anything over the top, just adding something that doesn't sound perfect - most people born deaf does not have a perfect accent, there will be some intonations that will be a bit off. I haven't read any of the previous books in the series but I didn’t feel like I was missing anything pertinent to the story. Sure I didn't know the side characters or their stories, but I didn't need them in order to enjoy this book. And in the end, what I got was a rather sweet love story about two gun-shy men taking a chance at love. A copy of this book was generously provided by the publisher in exchange for an honest review for Love Bytes

They are a perfect couple. I still would have liked to know why Simon's sister was doing what she did. Why should she even care. I still do not like the narrator.

Homoerotic author, Simon Tyler, is always unlucky when it comes to love. It surely doesn’t help that his family is a bunch of bigots; even if they are extremely well off. Not only is Simon’s life stuck in rut, but his writing is suffering as well. When he can get the words out on paper he writes more about his dreams and fantasies than what his reality actually is. Simon has all but given up on love, until one of his friends attempts to play matchmaker. Unfortunately, he is not the object of his friends’ efforts. However, when he meets the person in question, he begins to wonder if he can finally get his happily ever after.

IT professor, Adrian Keys, hasn't had the greatest of luck in the past when he has tried to date hearing men; especially when he is hard of hearing. So, when he meets his friend Chase at the restaurant for a night out with the guys, he slowly realizes he's being set up with one of the men at the table. However, the guy Chase has in mind for Adrian is not the guy that catches his attention. Amongst the group of men, it is Simon whom peaks his interests.

From here, the two navigate through personal and physical obstacles while coming closer together. For Simon, it is learning ASL so he can speak to Adrian in his language. In addition, he comes to understand exactly what it means to be with someone who is hard of hearing. For Adrian, it is understanding that not all hearing people are alike. Because, when someone really cares for you, they take the time to include you in their lives.

In the end, Adrian and Simon finally get their HEA; even with Adrian’s meddlesome friends and Simon’s crazy sister.

The story itself was sweet, and actually opened my eyes to what one has to do to keep living their life if they have a hearing impairment. Not to mention, if someone is dating/married to a non-hearing person. All the modifications that are made to make to make their day-to-day lives run smoothly. It seems like the author put some thought into this area of the book, which is nice.

However, IMO the story is seriously lacking conflict. I kept listening, hoping that there was more to it than Simon’s sister/family; it is a very small part by the way, but no. Due to the story’s lack of conflict and the narrators’ robotic performance, I struggled to finish this audiobook. I just need to know one thing though since it was never really answered. Who sent the picture sent to Adrian via text?!? I really don’t think it was Simon’s sister.

This is the fourth book in the “Desires Entwined” series, and it can be read as a standalone.

I am one of many reviewers at Gay Book Reviews.

I received an ARC of this audiobook in exchange for an honest review.