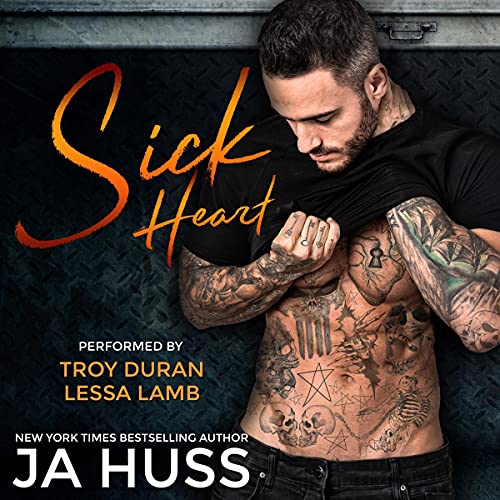 By: JA Huss
Narrated by: Troy Duran,Lessa Lamb
Try for £0.00

Cort van Breda has won 35 death matches as a fighter in an MMA circuit so deep underground there are no rules, and only the winner gets out alive.

They call him the Sick Heart.

They say he's a shameless monster.

They say he's a ruthless killer.

They say he's as twisted as the man who owns him.

They say a lot of things about Cort van Breda.

But in our world violence is money, and money is winning, and winning is life, and life is the only thing that matters.

And I wasn't meant to be his prize.

And now his sick heart owns me.

Warning: This is a sweet love story adrift in an ocean of evil. It is about two survivors dealing with their darkest secrets while they fight to change their lives. It is for mature listeners only and has descriptions of deeply disturbing situations. There will be pearl clutching.

What listeners say about Sick Heart

Julie never disappoints and Troy & Lessa’s narration was perfect! I really enjoyed this story and wasn’t ready for it to end!

Whatever you think this book is about.. just stop right there and let this phenomenal storyteller blow your mind with her dark, gritty, raw, deep, unique and twisted journey through a violent world of evil, pain, courage and love. Let her layered world-building leave you in awe, let her cruelly damaged characters touch your heart and let her complex, twisty and riveting survival of the fittest storyline grip your senses so tight you forget to breathe. And let Troy and Lessa’s perfect narration bring to life a spectacular listen you’ll surely never forget.

Worth a credit? Absolutely yes.. but it’s not for the faint of heart. I never quite know what to expect next from Julie.. but I do know this story of tragedy and courage has utterly blown my mind, pushed my emotional boundaries and given me a fast-paced, suspense-filled, intensely riveting ride that includes friendship, loyalty, passion, heat and hope too.

Light at the end of a dark story

The writing of JA Huss is never without some darkness. It's just her style and the woman can weave a dark romance like no other author in this genre. The thing I like most about her is she always pushes the limit. No one can ever say she doesn't shock the heck out of her readers. "What the hell?" is a totally normal response to have when reading her stuff and I love that.

Sick Heart is no different. It's dark taboo,and violent but there is always a deeper underline message. Being the hero of your own story is a common theme in JA Huss books.

That said, this is pretty dark so definitely don't go into this book with the assumption it's going to be kittens and rainbows. Its not! But hopefully the title clues you into that fact and its still an great HEA despite its darkness.

Narration is really good and hopefully there will be follow-up books on some of the other characters.

After I found my first JA Huss book I was hooked. I have listened to every book Julie has on Audible. I was so happy Sick Heart was a long one, she is the best story teller. Her romances/sci-go have so much depth. I can’t wait for her next book and hope she continues telling her stories her way. I loved the story, I loved the narrators (best performance) and I loved her eobs. She speaks from her heart. I’m definitely a fan.

My God, this is better than the Ebook!!!

I was waiting for this Audio book to come out (even bothering the author on FB) I was not disappointed let me tell you! I won’t rehash the plot because I don’t want to give anything away! The narrators are both spot on. Troy Duran is now my 2nd favorite male narrator. (Those who know me know my first favorite)
Just buy this audio book. You will not be disappointed!
Five Stars across the board on this one!

I typically don't leave reviews, but I thoroughly enjoyed this book..
At first I had a hard time following, until I understood the full book meaning behind the book. This book is on the dark side but well written. Loved both male and female narrators. I'm not going to go in to details but most definitely worth the credit. ❤🖤❤

This book… wow! The story of people being oppressed and rising up to take control! Whoosh! Yes!!! Highly recommend! Thank you for another amazing book Julie! Hoping for a sequel. Please!

I am a huge JA Huss fan. This book might replace 321 as my favorite. Some of the subject matter is dark and I can see how it could trigger some people.
Having Troy Duran as narrator was the perfect choice.

Great story. I never know what to expect.

I love how your stories are unconventional. And I enjoy the EBOS. Especially this one.

Each time I read a new JA Huss book I think there’s no way this book could be better than her previous books. Then I discover this book is as good as the last book or better.

Sick Heart is incredible! Julie not only gives you a book of romance, but she always delivers a complex story with characters you either love or hate. You will NOT regret reading this book!!

Not your typical romance

I read a lot of books, I mean A LOT. I don't have a favorite genre, I read everything. Usually after a book that might be something heavy to digest or leaves me sad or uneasy, I lighten myself up with a romance novel. This is how I discovered the delightful JA Huss. Aside from the spicy sex scenes, her story lines are compelling and her characters interesting. I never feel like she's just copy and pasting dialogue and I find it amazing that she continually comes up with a fresh new story. Sick Heart was just that and the topic was heavy, at times it was almost too much but true to her talent she found a silver lining in a troubled world. I'm sure people hated this book for it's sensitive topic but that means they didn't really listen to or read it all the way through.