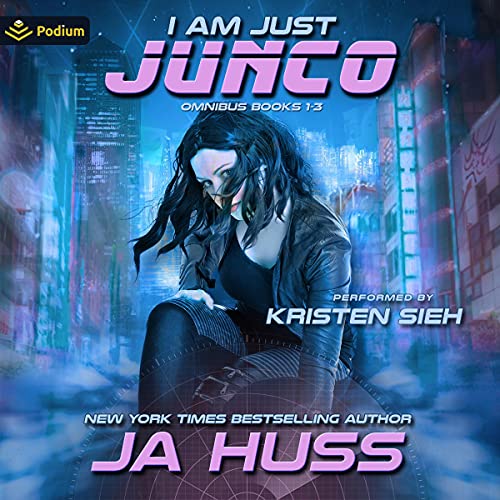 I Am Just Junco

Left with few choices after the murder of her father, a young assassin teams up with a brutal alien race to expose an 8,000-year-old plan to destroy Earth.

Nothing about Junco’s world is what it seems. She has been trained to kill from the day she was born and her life has been nothing but a long string of secret missions interspersed with long bouts of insanity and insubordination.

But now that her father is dead every military faction wants a piece of her. Especially the ruthless alien soldier, Tier, and his team of murderous brothers.

With no one left to trust she turns to the aliens, and their ancient overlord, Lucan, to learn the secrets of her origins. But this sanctuary comes at a hefty price and she will have to participate in a series of death battles to prove her worth and go on the most demanding and deadliest missions of her life.

But that’s not so bad, right?

After all, killing is what she does best.

What listeners say about I Am Just Junco

Logically as flawed as saying the moon is made of cheese

The cheesiness of this book surpasses any attempt that crazily strives to make a coherent story. This is a story that descends into the absence of storytelling as the bucket falls down into a well that is dry. I tried to give it a chance, listening to various chapters over again. A few things stand out it is a promising story that descends into the absurd that makes me ask why did I get this? And then I realise that I shouldn’t insult my mind and continue listening to stupidity. There are moments of genius that are overshadowed by a story that is so absurd that even a lover of chittybanbang would struggle. If you want great narrators with an idioticstory then I’m sure you will enjoy it. I couldn’t finish book two as it wS the most idiotically contradictory list of paragraphs one after another

Riveting! I need the next 3 books NOW!

I bought this book because of all the excellent reviews, I was not really sure what the book was all about, It started out with a bang and never really slowed down for the next 28 hours. Junco is an assassin, trained by her father, who has just died. She doesn’t realize she has lost large blocks of memory and as the story progresses what she has lost is slowly revealed, but nothing is what it seems. If you like to be constantly on your mental toes, this is th book for you. There’s a “big love” type of romance that drives the story but due to circumstances, it isn’t front and center for most of the 3 books.

The narrator is definitely a voice actor who can handle many character voices, male voices for the most part, and does them well. She is so good, I forget all about her, and just fell into the story. 5 stars! And 5 stars for the story also. Now I have to wait for the second omnibus to come out in audio because I cannot imagine reading the last 3 books after listening to Kristen Sieh narrate the first three.

Junco has some real daddy issues or she truly falls I love with ever man in her life at that moment. I found myself rolling my eyes every time a man got in her face because I knew they were gonna start making out. I don’t think I will listen to anymore in the series.

I LOVED this book. The minute it was over, I started from the beginning and listened to the whole thing again to pick up on the clues and nuances I didn't see the significance of the first time. The only other time I have ever done this was after I saw the movie "The Usual Suspects". Remember how gobsmacked you felt after that ending? Same type of situation with this fantastic book, every 28 glorious hours of it.

Masterfully and suspensefully written, it is full of characters you will love --and love to loathe, heartstopping action sequences, and scenery so vividly described you will feel you are standing there. Be warned: there is lots of violence and horror in here and it's described vividly too. I am an experienced reader but some of this stuff made even me squeamish.

Could not have asked for better narration -- it's superb. I mean this: Top. Tier. Performance.

Cover art matters and this one deserves much better. It looks like some sort of cheap stock art that has no resemblance to any place or character actually in this book...and it deserves to be a best seller.

Edited to add: I purchased the books in paperback...they have gorgeous covers.

poor story it's actually really annoying she's supposed to be a killer but so far she's doing a piss poor job at Killing. it's a really long book I thought it would be better but sadly it's more annoying than anything. She seems to not stick to her decisions that she makes and shes super judgmental over shit that she does herself. her overall character is a mix between overconfidence and passing out at the smallest injury while also taking these weird mental detours shes bloody annoying.

Amazing Story - JA Huss does YA

I am addicted to these Junco books. The Junco series isn’t sexy like other JA Huss books, more like a JA Huss version of a YA book. The Junco books are action packed and the lead character kicks butt. In true JA Huss style the world building is beautiful. The story is exciting and complex in a good way... who is the good guy, who is the bad guy? Heck I still don’t k or, bit I have two books to go.

Junco the character is strong and funny. She also has multiple loves and lovers over time, not just one true love like most action stories. I think that is much better and emotionally healthier for an audience to read. Junco’s relationships are real and refreshing. These stories would make a great tv series or movie series.

The actor on this audio book is AMAZING. I honestly can’t remember the last time I’ve heard such a talent in an audio book. Her energy is perfect. Her voices and accents are spot on. I’m gonna look for more of her work too.

Loved the original but I love the remastered even more, I can't wait for the next release.
So worthy of 1 credit 28 plus hours of excellent listening

I absolutely love JA Huss. And, I tried my best to stay interested in this book but I just couldn't. I'm sorry.

Twist, turns, half truths and some twisted madness. Best way I can describe this adventure

No trust only confusion

I loved another series by this author so thought I’d give this a try. I found it to have too many characters, too many clones of those characters etc. Trying to keep up with what was real, a dream or a memory was a challenge. I found it just weird that she could have so many relationships with men that one day they were a brother figure or father figure and the next a potential lover. Add to that there was almost no jealousy among all the love interests, twining partner and male friends I just found it unbelievable. Also for a girl who got burned & used by so many people, one who was so cynical at times she was just unbelievably trusting. After the ending of book 3 I don’t think I’ll bother to buy the rest. I just felt that someone who came across as a father figure up until the final pages and turned into a potential lover.. yep nope I’m out.
HOWEVER… I did love her other sci-fi series so will see what else she has written and give that one a try!

Kristen Sieh you are the best!!!! Kept me interested through and through. I love the different accents you had for all the characters. It made for a wonderful experience. And JA Huss…. I don’t know what to say, I think I got almost all your books. Can’t wait for more!