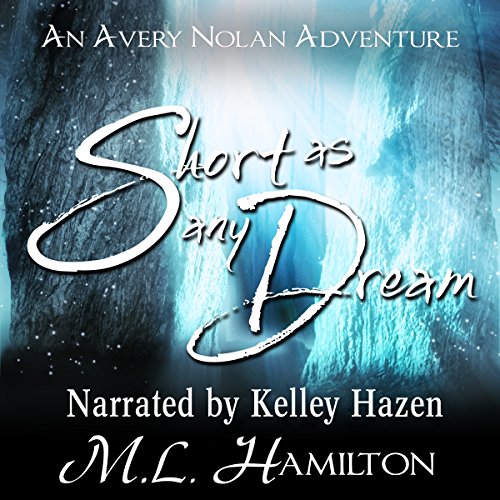 Short as Any Dream

Avery moved to Lake Tahoe for the quiet. She didn’t get that. What she found made her question everything she knew about the world. Basil, her aging golden retriever, has aged in reverse. Her new neighbors make flowers grow in winter. And her student, pale-eyed Bay, can freeze a bully’s heart in his chest. Then there’s Duncan. After Duncan is captured in the Greensward, Avery thinks her biggest challenge is to rescue him, until ICE Agent Graham Braddock shows up at her door, claiming Duncan Sommerfeld is an illegal alien. Oh, if he only knew. Even so, she has to keep her promise to Bay - the promise that she would bring his father home to both of them, but how the heck did you accomplish the impossible?

What listeners say about Short as Any Dream

With Duncan gone, Avery and the Aunts take over the responsibility of looking after Bae. Avery aims to keep her promise to Bae to look after him and bring back his Da. In the meantime, the ICE agent is lurking around corners trying to get Avery to spill the beans on Duncan. This story is a little slow paced. A lot of it is a waiting game as Avery and the Aunts try to piece together information to find a new portal. The way is littered with hidden surprises, new abilities, enemies ready to pounce when least expected and friends who show exemplary loyalty. The plot picks up where the last ended and ends with the tease of more to come. I thoroughly enjoyed Avery Nolan's story and am looking forward to the next! This book was given to me for free at my request and I provided this voluntary review.

I was voluntarily provided this free review copy audiobook by the narrator and found it enjoyable and intriguing, but way to short. This is the second book in the series. Avery comes to the conclusion, be careful what you wish for. Her life has totally changed, but not for the better. One by one her new family is stolen away from her. I was so caught up in the story that I was shocked when it ended. Between the story and the narration this series is extremely entertaining.

Book Two DOES NOT disappoint. The great mysterious quest that started int he first book continues on with new revelations and obstacles. Also a ton of humor. I look forward to Avery gaining more self-confidence. This series reminds me of the way Stephen King released The Green Mile in a series of very short, regularly-released paperbacks like the old serials. I'm hoping Book Three comes out as quickly as Book Two. I'm ready to listen to more.

Avery Nolan is a fantastic hero. I love her and her relationships with her students. I love how scared she can feel and yet how brave she is when the time comes. This is a great second book and I can't wait for the next. This series feels like a TV show - episode to episode - you really look forward to the next week's installment. The romance is really touching. The kids are hilarious and so are the aunts. The mystery of Avery's mother's past is really heartfelt. POSSIBLE SPOILER: And I love the fantasy of the other place. This is also a really really funny series. Summer listening, you bet!

Avery is caring for Bay while his father, Duncan Sommerfeld is still being held prisoner. With the help of the two aunts, ICE Agent Graham Braddock, and her institutionalized mother, Avery is close to figuring out the many secrets and figuring out how to rescue Duncan. Then comes a new wrinkle and Bay is whisked away, it’s now or never for Avery. She has to take action against her most powerful adversary yet. The story moves much quicker than the first book. Some may come to believe that Avery doesn’t like children because of her snarky remarks at times; I feel this is truly how most of us feel. Avery is in the unique position of giving voice to those feelings we all experience. I think it is well done and relatable. Sometimes Avery comes across as whiny but when push comes to shove it is clear she is a much stronger woman than we originally believed. This is the perfect mix of fantasy and mystery! The character development is good and solid as is the plot. I enjoy how Avery works things out in her mind, although there are times I give her an “OMG are you kidding” eye roll. I enjoy this series immensely and feel they are growing better and more exciting. The narrator, Kelley Hazen, moves the story along with the tone of her voice and emotional inflections which also enables a connection to the listener. Hazen understands and resonates Avery with each word; also, her voice is the correct age and professionalism of Avery the teacher. Further, she is able to do a decent Irish accent. I highly recommend this audiobook for a light listen and some good solid fun moments as well as emotionally charged ones. There were no audio issues and the quality was perfect. Audiobook was provided for review by the author/narrator/publisher. Please find this complete review and many others at my review blog. [If this review helped, please press YES. Thanks!]

Short as any Dream (Avery Nolan #2) by M.L. Hamilton was a great read. Avery thought that things would be much better in Tahoe. She didn't expect to gain and lose Duncan in that time. This was a great read that followed Avery trying to find Duncan.

The second book in the Avery Nolan Adventure series is definitely more action-packed than the first one. And more emotional... Duncan has been captured and Avery has no idea how to find him. Even worse, an ICE agent appears on her doorstep asking difficult questions about Duncan and soon starts stalking her, certain she knows where Duncan is. But that's only the beginning - every chapter brings new trouble for Avery, Bay and the Aunts, and the emotional strain reaches its peak in a heart-breaking scene near the end of the book. The pace of the story is much faster than in book one. The background situation having already been set, Ms Hamilton can focus solely on the events and character development. ICE Agent Graham Braddock is an intriguing addition to the set of characters, his unnerving and ominous presence being a constant threat to Avery's peace of mind. Her mother, although appearing only for a brief moment, leaves a strong impression on the reader/listener, and Avery herself gets more complex, sometimes behaving erratically and sometimes acting in cold blood under pressure... And the ending leaves us in an emotional turmoil, both terrified and hopeful of what may happen in book three. The narration by Ms Hazen is perfect, with the right pace of reading, very good voicing of characters and no overacting whatsoever. I can't wait to listen to part three:) DISCLAIMER: I was given this free review copy audiobook at my request and have voluntarily left this review.

Be Careful What You Wish For!

I have enjoyed many books by this author and narrator, and was not disappointed with this one. This book is part of a series and a standalone listen. I loved the twists this book had! Without giving away spoilers, I found this story to bring out many emotions. Kelley Hazen performed those so well. I can't wait to listen to the next book in the series to see "where" things go. Basil, the wonderful Golden Retriever, is an active canine companion in this book and adds to the story. I love the premise of one's beloved pet not letting age get him down. That is only a small portion of the book. ML Hamilton does such a great job with the imagery in this book.