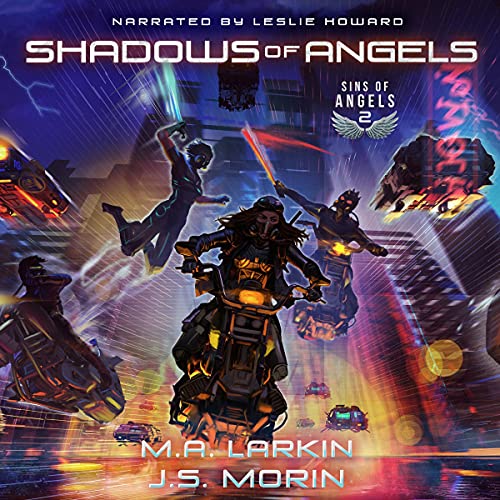 The book was never the end. It was only the beginning.

With the Sefer Raziel in hand, Rachel races to escape with it before anyone discovers her. Hidden within the pages of the book are secrets that could destroy armies and reshape worlds - certainly enough to bring Rachel’s pursuers to their knees.

Except she can’t read it.

As Redeemers close in and escape from the planet’s surface restricted, Rachel has no choice but to trust someone who betrayed her - and hope she isn’t making an even worse mistake.

Shadows of Angels is the second book of Sins of Angels, an epic space opera series set 3,000 years after the fall of Earth. With the scope of Dune and the adventurous spirit of Indiana Jones, Sins of Angels delivers a conflict that spans galaxies and rests on the spirit of a single brave researcher. Follow the complete saga, and watch as the fate of our species hangs in the balance.

What listeners say about Shadows of Angels

I thought that the first book was focused on people, but wow, Shadows of Angels really stepped up the characters and character building to a whole other level. Morin & Larkin really understand how to write both believable and unbelievable (but in that hyperbolic way) characters that just jump off of the page.

Where Echoes was building up the world and people Shadows really dives into the struggles both internal and external that these characters are facing.

There was a lot of action and some of the action scenes seemed to go on a bit long, but overall they still flew by. I think that having a great narrator like Leslie moving the scenes along for me bit by bit, I really started to fall in love with these books and the worlds that they are depicting.

This was one of those books where if I go into any of the reasons that I like the book it’ll end up spoiling the first two – so I’ll hold off, but know that if you’re a space opera fan – the first two books in this series won’t steer you wrong!