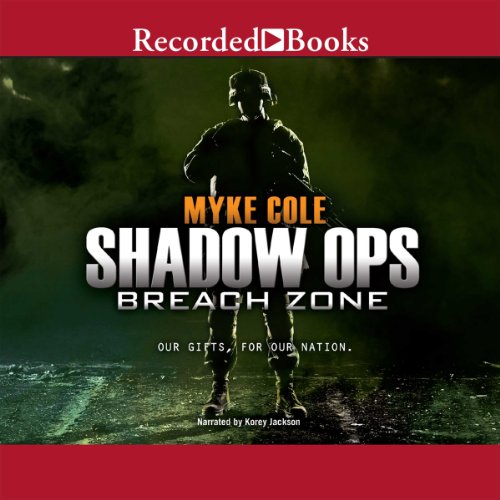 In the wake of a bloody battle at Forward Operating Base Frontier and a scandalous presidential impeachment, Lieutenant Colonel Jan Thorsson, call sign " Harlequin," becomes a national hero and a pariah to the military that is the only family he' s ever known. In the fight for Latent equality, Oscar Britton is positioned to lead a rebellion in exile, but a powerful rival beats him to the punch: Scylla, a walking weapon who will stop at nothing to end the human-sanctioned apartheid against her kind.

When Scylla' s inhuman forces invade New York City, the Supernatural Operations Corps are the only soldiers equipped to prevent a massacre. In order to redeem himself with the military, Harlequin will be forced to face off with this havoc-wreaking woman from his past, warped by her power into something evil.

Good fun and enjoyable finish to the series

Where does Shadow Ops, Book 3: Breach Zone rank among all the audiobooks you’ve listened to so far?

If you’ve listened to books by Myke Cole before, how does this one compare?

Compares about the same although Cole seemed more at ease in the delivery of this book which was good.

Made more of the characters and voices.

even better then the first two

Myke Cole weaves a complex set of characters into this futuristic clash between worlds. The exciting plot of his previous books is strengthened by back story that gives depth to a fast-paced battle for the future of humanity.

SCIENCE FICTION AT ITS FINEST

I have never enjoyed a book series more than Myke Cole's Shadow Ops trilogy and its prequel Reawakening trilogy.

It offers a seamless collaboration of both military and science fiction storytelling. It presents an idea that has been portrayed in multiple series in an amazing new way, forcing you to seek out the remaining books to get learn more. It creates an addiction to the story line, that cannot be satisfied until you find all 6 books. Yet, afterwards, it makes you ache for a third trilogy.

If you love magical style fantasy and military novels, this amalgamation of both is a must read. All 6 books are a must read.

fast paced action packed story. i couldn't stop till i got to the end.

Easily the best book in the series thus far

I'm going to keep his short. Originally I was never going to read this book because the previous books in the series pissed me off for various reasons. But I heard a sufficient number of good things about this book for me to give this book a chance, and it paid off. It wasn't a spectacular book by any means, but it was quite enjoyable and I can see myself listening to it again (which is something I cannot say for the other books in the series).