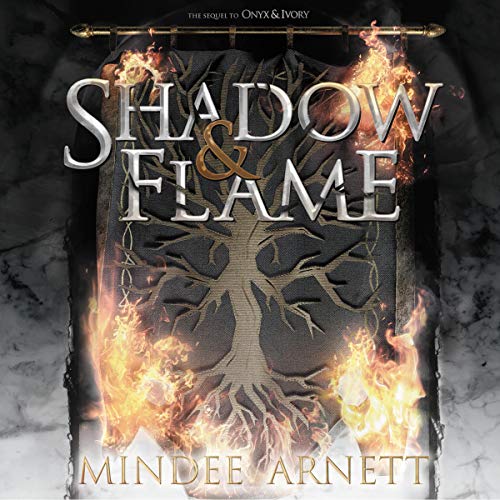 By: Mindee Arnett
Narrated by: Khristine Hvam
Try for £0.00

They call her the Wilder Queen. It’s a title given to Kate Brighton for her role in the war between the wilder rebellion and the Rimish empire. It’s a title that was hard earned: Kate may have saved her people, but many were lost in the conflict, immortalized in the tattoos of fire that grace her arms.

And it’s a title that Kate never wanted. The rebellion may have made a home for themselves in a country that wants to cast them out, but the peace will never be safe while Edwin, the illegitimate king of Rime, sits upon its throne. And for that, the Wilder Queen must keep hers.

Now war is brewing once again. Kate and her allies receive word of a threat to their ambassador in the Rimish capital; meanwhile, across the channel in Seva, an army is being assembled to conquer Rime - and a prisoner slave named Clash may hold the key to ending the conflict once and for all.

As enemies close in on Kate and Clash from all sides, they must choose where their loyalties lie - with their people, with their loved ones, or with themselves.

The epic story that began with Onyx & Ivory comes to a stunning conclusion as acclaimed author Mindee Arnett throws listeners into a beautiful, terrifying world poised on a razor’s edge in its struggle for survival.

What listeners say about Shadow & Flame

Wow what a difference the actor makes

Loved this story but what really hooked me was the voice actor. Kristine has such talent. Her characters each so distinct, some sexy, some rough, some funny. A real joy. Sad to say good bye to this audiobook. The story was so good! It was fantasy but full of intrigue and brutality and romance. Everything I adore in a story. I even teared up a bit at the end. Defo would reccomend this to anyone as it has a bit of something for everything and again K. V REALLY MAKES IT WORTH IT.

Really struggled to finish this one because I stopped caring about the characters, the 'twists' were obvious and there was some macguffining going on big time so the story stopped feeling grounded.

Loved this book, it’s better than the first.. more gripping, explores characters flaws.. more action.. it’s hard to not put down .. I hope there will be more books that explores/tells the stories of the other characters..

loved it! great performance to a great story! I wish book three would come out soon!

A lot of sexual tension and a good amount of war time action. Surprising

storyline was wonderful, the narration tended to drag a little but good sound. i will definitely recommend

I loved book one but this one just starts off miserable and theres just no break from it and I wasn't enjoying it so I just stopped listening to it a few hours in. Bit disappointed because of how much I loved the first one. Maybe I'll finish it later on and change my mind.

I was hoping for more!

Overall it was a pretty good read, besides the narrator.
I LOVED book 1! But this one felt so predictable.
Kate went from lovable in book 1 to honestly rude and judgmental and bland.
I also could barely finish listening due to the narrator! She reads normal scenes pretty well but when it came to her reading as the priestess or during the more “spiritual” or slower parts she did such a weird pace and inflection almost as if she was asking a question on EVERY sentence!
The romance between Kate and Corwin felt almost forced, in that they only wanted to be together because that’s how it used to be!
I did enjoy some of the new characters, but I was disappointed and found myself rolling my eyes and putting off reading it for days.

Wonderful end to the series

this author has yet to disappoint. super glad I started the series and would definetely reccomend

I have to say I was expecting so much more from this book, the first was was so exciting and amazing! Having waiting so long for the second installment I found my self sorely disappointed. There’s only so much you can take of bad things upon bad things happening to your favorite characters and I fast forwarded through so much of it. Gods it was disappointing-_- The ending was satisfactory though.