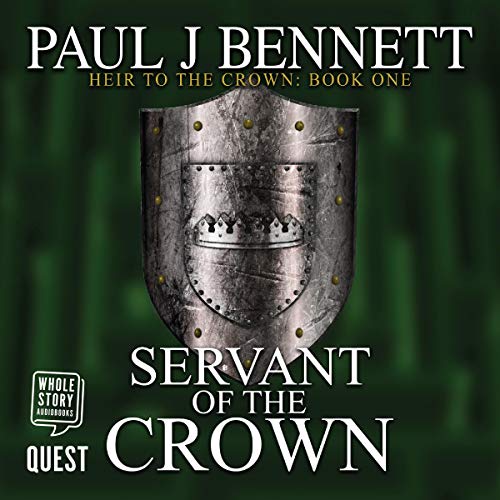 Servant of the Crown

By: Paul J Bennett
Narrated by: Greg Patmore
Try for £0.00

An old warrior, too stubborn to die. A royal heir, hidden at birth. Can they save a realm on the brink of war?

Tragedy tears Gerald's world apart, and only his unwavering loyalty to the Baron of Bodden saves him. After serving as a soldier for years, a single act of self-sacrifice thrusts his future into the world of politics. Cut off from all he knows, he becomes no more than a pawn to those in command.

Banished with little more than the clothes on his back, he seeks a new purpose, for what is a warrior who has nothing left to fight for?

A fateful meeting with another lost soul unmasks a shocking secret, compelling him to take up the mantle of guardian. Bandits, the Black Hand, and even the King, he battles them all for the future of the realm.

Memories of the past, secrets that shape the future; his adventure is only the beginning.

Servant of the Crown is the first audiobook in the medieval Heir to the Crown fantasy series. If you like gripping fight scenes, compelling characters, and a captivating story, then you will love Paul J Bennett's tale of a warrior who refuses to retreat.

Order your copy of Servant of the Crown, and discover the realm of Merceria today!

Other audiobooks in the series, coming soon:

Sword of the Crown

Heart of the Crown

What listeners say about Servant of the Crown

Here we have an interesting and well written, if flawed, book.

Greg Patmore's narration is quite good. He has a good assortment of character voices and is good with inflections. The only things keeping him from a 5-star performance are the lack of tempo variations and the fact that his voices don't change as characters age. (Anna, for example, has the same choice at age six as she does at age thirteen)

Now, the story, such as it is.

First and foremost, I really feel that this should be a prequel rather than book one. We spend a lot of time with Gerald and get to know him very well. But unfortunately, he is NOT the protagonist.

Based on the events depicted in the story and how it ends, it's really Anna and Beverly's story. I have so many unanswered questions, largely because there is almost nothing herein about Beverly's journey. On account of that, her role in the end feels almost like Deus Ex Machina.

That being said, I really love Gerald as a character. He reminds me a lot of Eddard Stark. He's this super idealistic and honorbound warrior who really struggles to figure out how the world really works. And every time we turn around, someone is double crossing him and he only just makes it out with his head still attached to his shoulders.

That being said, the comparisons to A Game of Thrones pretty much end there. Here we have a world that, while brutal, is not nearly so dark and gritty as that in GoT.

There is an argument to be made for things working out just a little too conveniently, but I don't feel it goes far enough to break my belief or immersion in the world.

There is a problem though. Unfortunately, this is not, in the strict sense, a story. It is an episodic narrative. We get to see lots of little vignettes, but the only thing connecting most of them is that we're following the same character(s) throughout.

There is no overarching plot. There is no continual building of tension. And there was no defined beginning, middle, or end. All three of those points came only arbitrarily as there was nothing connecting them that required them to be where they were.

Similarly, this book does a lot of jumping through time without talking about what happened in the interim and it was very distracting.

And I have to wonder, what was the point of the 8-chapter flashback to Gerald's past?

Yes, it helped to get to know him better, but all the pertinent points of his past were addressed later. And I can't help feeling that certain elements from his past could have made a great secret for Anna to delve into that could have been used to build both of their characters even more.

Now, the point of view.

In fairness, this is largely a style choice and personal preference. But it's a pet peeve of mine.

The omniscient narration of this book was detrimental to my ability to connect with the characters. Throughout the entire book, there was an unnecessary distance from the characters because we weren't really inside any character's head. We were told their feelings and motivations (bouncing between characters with no warning at times, which was quite jarring), but at no point did we actually see the inner workings of any character's mind.

Now, before you go thinking in just ragging on this book, I'm really not. It was very skillfully written and I can see the soul of a born storyteller behind it. It just needs a little work to turn into something incredible.

Finally, as I've touched on already, the ending was less than satisfying. It felt like an arbitrary, "let's just stop here."

All that being said, I do recommend this book to anyone looking for authentic or semi-authentic feeling medieval fantasy that is perhaps a little less dark (and adult) than Game of Thrones.

And I am continuing the series. With a little work, this author could be amazing and I'm really hoping to see him step it up in the next book.

Not quite what I expected.

I chose this book because it was said it was a mix of historical and epic fantasy and so I thought it must be an excellent story. It's not, or at least I'm unsure if it is. This story, sort of grows on you. It's a slow start, but picks up a little as you get into it. Don't expect high adventure, epic battle scenes or emotional trauma related to challenges of a hard earned deed accomplished. It is very linear, and almost sedate, not a lot of world building, and the characters are nice enough but not very deep. It's not a bad story, and the narration is excellent! I will continue on with the story, to see where it leads, not because I'm emotionally invested in the characters.

This book takes a great deal of time building the main characters. The odd thing about that is, it missed a huge opportunity in the beginning of the book to do so. The main character (Gerald) is introduced at a very young age and in about two chapters he’s a man. His entire youth is skipped in the book. Huge missed opportunity to bring leaders closer to an easy character to love.

The book kind of rambles on randomly with several chapters that appear to have no real meaning or point other than character building. But, it’s incredibly entertaining.

This is the first book I’ve listened to by this narrator. His voice is amazing and makes you feel like you’re truly in the story. I’ll need to listen to other books from this narrator because it may just be that he saved the book.

Love to hear more from this author as his skills progress.

I totally loved reading this book a d the Audible rendition was excellent. The voice of Gerald was just as I expected and Anna was pretty close too. This story drew me into the world of Mercia and totally enthralled me. The world building is top notch and all the characters are completely different and totally enjoyable. Grab yourself a copy and curl up in your favourite reading spot with your favourite beverage and lose yourself in a fabulous series. Highly recommended.

This book had me checking facts about merry old England. It wasn't until our heroin met an Elf that I knew something was up. I love historical fiction but the realism in this fantasy had me hooked and I was listening during all my work breaks. The narrator , Greg Patmore, did a superb job and the imagination of the author is quite superb. I am looking for the next book.

Love this book and the performance! The performance was really "warm" and the focus was on unlikely friendships.

Servant of the Crown, Heir to the Crown, Book 1
Great introduction to this series. Gerald Matheson is the Servant of the Crown. Simply written, easy read, easy listen. In the first quarter of the book we are introduced to significant events in the first forty years of Gerald's life. When the wounded soldier is sent to work as the grounds keeper at the Royal Estate at Uxley he befriends Anna, a lonely 6 year old girl. Hidden from public view since birth and rumoured to be deformed, Anna is the unwanted youngest daughter of the Queen. Anna is fair and her paternity is in question, albeit the King acknowledges her as a daughter. The majority of this story meanders through the next seven years of their life at Uxley. Anna is uncannily clever for a child. When an Elf and a Dwarf are introduced, the story moves into fantasy.

This is a linear narrative, without a POV, suitable for teens (although there is a rape and murder). There isn't a clear plot line. No sense of urgency or impending doom until the end when the knight Dame Beverley delivers news that Merceria has been invaded. Then the story stops. Anna has just turned 13 years. Not a true cliff-hanger and you could stop here. I will continue this fantasy saga as in Sword of the Crown, a stand alone, we learn more about Dame Beverly Fitzwilliam.

I love the narration by Greg Patmore. The characterisations are great. Gerald is as I imagine. My only gripe is that Anna doesn't sound childlike in the early stages. I'm not sure how Greg could mature her vocally and keep Anna identifiable as Anna.

Once in a while i get a pleasent suprise when selecting new authors in the fantasy genere. This book starts of in the media res style, we get a breif look into the background of the main char. IT could ve been deeper but is sufficient. Then comes back to where the story started, the drive in the story is pleasant. There Are some weaknesses like when the main characters go to the slum. Seems like the sergant doesnt understand the dangers in the slum. But its not a showstopper.
The narrator is good,

Recommended if you are a bit tired of fantastical hero stories.