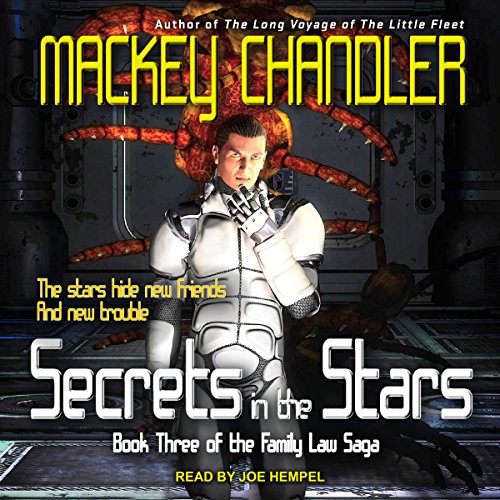 Secrets in the Stars

Secrets in the Stars

When Lee Anderson and her parents discovered a new world teeming with life, it was the dream of every explorer: they were rich beyond their imaginations. But tragedy struck when a herd of creatures overran their camp and killed her parents. The only other adult in her life had been their partner Gordon, who adopted her as parent. Which didn't turn out to be easy, because he wasn't human.

He was a large intelligent alien, and to Lee, he was Uncle Gordon, but neither his race - the Derf - nor humans were gracious about accepting their family relationship. After various misadventures and strife, they made others accept their relationship and also found that while they might not share blood, they both had exploring in the blood.

Unhappy in civilization, they decided to explore again - going really deep this time, far beyond established frontiers. They met other alien civilizations, made claim to new sources of wealth that rivaled their previous claims in value, and then headed home to present their new claims on Earth. But a lot of things didn't make sense. Warnings came from their Fargoer allies that not everything on Earth was as it seemed to be.

This is the story of their return voyage, and the unexpected mysteries in what they had left behind.