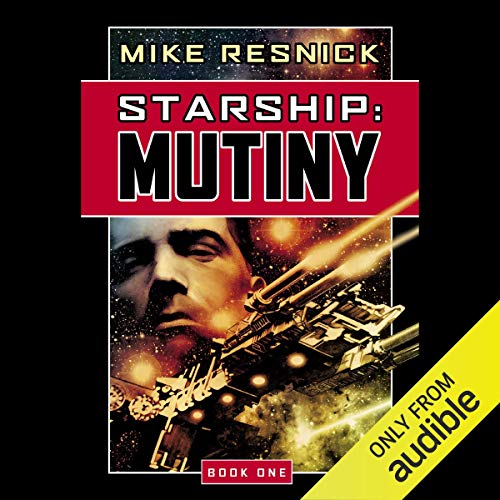 The date is 1966 of the Galactic Era, almost three thousand years from now, and the Republic, created by the human race - but not yet dominated by it - finds itself in an all-out war.

They stand against the Teroni Federation, an alliance of races that resent Man's growing military and economic power. The main battles are taking place in the Spiral Arm and toward the Core. But far out on the Rim, the Theodore Roosevelt is one of three ships charged with protecting the Phoenix Cluster - a group of 73 inhabited worlds.

Old, battered, some of its weapon systems outmoded, the Teddy R. is a ship that would have been decommissioned years ago if weren't for the war. Its crew is composed of retreads, discipline cases, and a few raw recruits. But a new officer has been transferred to the Teddy R. His name is Wilson Cole, and he comes with a reputation for heroics and disobedience. Will the galaxy ever be the same?

What listeners say about Starship

Let me start with what this is not.
It is not Orson Scott Card, deep and emotional.
It is also not Asimov, overwhelming you with technical details. This is a good story about characters you come to like very quickly, and it never lets you get bored or distracted. It is light and engaging, and the hero is what he should be, a little smarter than everybody else. (a bit like James Bond) I could do without the narrators overused and distinct "said Cole",.. "said Foreyes",.. "said Cole",.. "said Fujiama",.. But this does disappear as the story continues.
I bought the second book before I had finished the first, because the characters are fun to travel with.

Well worth the credits.

The author gives us an explanation as to why he wrote the series to begin our tale. He says he is interested in writing the story of a leader.

He fails. The main character is not a leader. He is a subverter. It just so happens that he is smarter and more "intuitive" than all his superiors. His superiors are so ridgidly unbelieveable it strains the imagination (of the reader!).This stereotyped story of untinking space marines and a stupid face saving military hierarchy was simply absurd. The main character stands out because he is a "thinker" while everyone else are lazy ignorant louts. Unbelievable! It as if the author's intended audience was 6th grade boys and he was writing in the media frenzy at the end of the Vietnam War.

I will not be listening to the rest of the series and I love a good series.

Move along, nothing to see here

I've almost made it through this whole series by now, I don't really know how I have endured it this far. I guess I just like to finish what I start. And let me tell you, ill be relieved when Jonathan Davis pulls me through the last minute of this audiobook.
Long winded speeches about Wilson Coles genius, cliches and repetitions of said reasons why Wilson is the only one person in the universe with two brain cells to rub together, it just gets tiresome.
Get a David Weber or Lois McMaster Bujold book instead. Pass this one up now, before it's too late.

You can't keep a good man down

Semi space opera/military.
The lead character is a Wilson Cole, an officer in the Navy of the Republic. The backdrop is an interstellar war with Teronis (and fluid alliances with other parties in the outer rim of the galaxy).
It's not as gung-ho a say David Weber's "Prince Roger" series - but a good start.
Basically, its based around a very quick witted Cole, who has been given a bunch of misfits for a crew, a crap ship and is posted out of the way. Cole came about to this predicament because he was too good and did everything to ensure a successful mission (beyond the call of duty) - in doing so embarrassing his superiors.
We follow Cole, in his journey to transform the misfits in to a fighting force..

Too much work on the author's part....

I really enjoy most of the works of Michael Resnick. I love the Santiago books. I like the Widowmaker books and the fantasy detective novels are extrenely good. So when I saw that Audible had this series available I was happy to give them a try.

And was disappointed. Some characters only seemed to exist to prop up the main character's personality in a "Gee wiz, you are great and smart" sort of way.

Too much work had to be done by the author to make the story come out as he desired. Too much deus ex machina. Truthfully, I only made it through a couple of hours of the audio, so there remains the possibility that things could have turned around.

Listen to Santiago. Read Michael's other excellent books. Give this series a pass.

Find something better than this to listen to.

I was hoping to find a sci-fi series that would make a good listen during runs and trips over the next few months. After listening to this first book, I will not be purchasing any more of the series. Although the story and characters are somehwat interesting, the portrayal of military leadership as inept and ineffective is totally unrealistic. In fact, I felt it was an insult to all who have served in the military to characterize their institutions as suffering from gross failings in leadership as described in this novel. I recommend you find a sci-fi book/series that more accurately describes the type of men and women who rise to lead our militaries effectively through their hard work, dedication to their countries, and supreme self-sacrifices.

My first time to give 1 star to any book. I listened to about a half-hour and started to suspect that I was hip-deep in space-mediocrity. So, sez I to myself, maybe just a little bit more, since I hate to press ERASE on a book I've already paid for. Twenty additional minutes were more than enough.
The set-up? Wilson Cole, twice busted from captain of his own space ship because he can't live according to the regulations (i. e., he's convinced that he makes better decisions than his superiors, and so disobeys orders he thinks are dumb...all in time of war). All the cardboard scenarios are here, folks: the renegade who plays by his own rules; the brilliant intuitive decisions that only he can make; his million-to-one guesses about what will take place...and that of course do come to pass just as he predicts; his know-it-all expositions to his intellectual inferiors, who gaze with open-mouthed admiration at their hero. Puh-leeze! It's a stereotypical earth cop show transfered into hyperspace (and by the way, they travel at light speed and click off dozens of light years without a net...or any sort of escape hatch from relativistic physics). I just read Caesar's Commentaries from AudioBooks. A dictator, yes, but now there was a brilliant leader and strategist! And a wonderful writer, as it turns out. Pass on Mutiny, go for the Commentaries.

Resnick should add more depth to his characters. Wilson Coal is the hero. He lacks the nuances that make other authors' heros multi-dimensional. So far - having listened to two books - the hero doesn't make any mistakes or lose at anything.

Think Honor Harrington for an example of a well developed character.

Having said the above, I have purchased all 3 books in the series, so something brings me back

Great sci-fi military fiction, hope the rest of the series is this good. I was disappointed with the Honor Harrington series and this, like the Barryar books is similar, but better.

Would you listen to Starship again? Why?

Absolutely.... Listening to the Whole Starship series is very exciting....Jonathan Davis and Mike Resnick give each character their own personality....so the listener can get to know the characters over the course of the whole story....

its unpredictability, the friendship between the characters

What about Jonathan Davis and Mike Resnick ’s performance did you like?

yes ..but dont usualy have the time