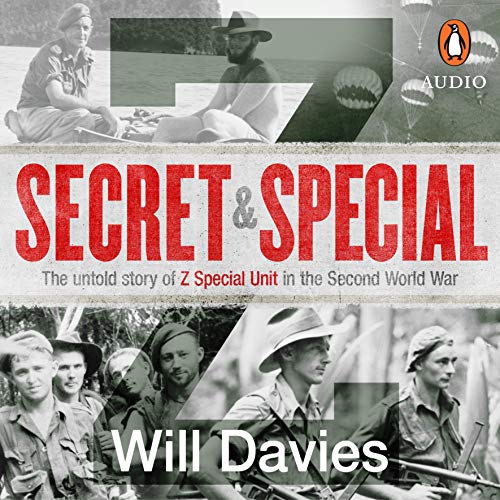 By: Will Davies
Narrated by: Steve Shanahan
Try for £0.00

Soon after the declaration of war on Japan, a secret military reconnaissance unit was established, based on the British Special Operations Executive (known as SOE) and called the Inter-allied Services Department. The unit was tasked with the role to "obtain and report information of the enemy...weaken the enemy by sabotage and destruction of morale and to lend aid and assistance to local efforts to the same end in enemy occupied territories."

In 1943 it became known under the cover name Special Reconnaissance Department (SRD) and included some British officers who had escaped from Singapore. After arriving in Australia, they assembled in Melbourne, forming the nucleus of ISD and, together with some Australians, established what became the Z Special Unit.

Training began in a number of locations around Australia including on Fraser Island off the Queensland coast, In Broken Bay near Sydney, at Careening Bay in Western Australia, at the 'House on the Hill' in Cairns and at East Arm near Darwin. From these training areas and bases, Z Special undertook intelligence gathering and raiding missions throughout Southeast Asia including New Guinea, Singapore, Timor, Malaya, Borneo, Vietnam and the Dutch East Indies.

The first operation was Jaywick in September 1943, led by a 28-year-old officer from the Gordon Highlanders, Captain Ivan Lyon. Using an old Japanese fishing boat renamed Krait this captured vessel was re-fitted and provisioned for a voyage from Australia to just south of Singapore, where it released six commandos in three folding kayaks to attack Japanese shipping in the harbour.

They placed limpet mines on several Japanese ships, sinking 40,000 tons of shipping. After the successful attack, they paddled south, were picked up by the Krait and successfully returned to Australia.

This was followed by Operation Rimau, again led by Lyon, but this time things went very wrong very early. Identified, they made a fighting withdrawal but all of the raiding party were shot or captured, with the last 10 being executed just before the end of the war.

Important in Z Special operations were a number of vessels designated 'snake boats'. Four 66' modified trawlers were constructed as well as a range of Asian vessels that allowed their operation in South East Asian areas of operation.

One Z Special, the last in PNG, set out on the night of the 11 April 1945. Eight operatives were landed on the Japanese held island of Muschu about five kilometres off the coast near Wewak to determine the status of two 140mm Japanese naval guns that had been placed there.

These guns would prove dangerous to planned naval landings at Wewak, and allied command needed to know if these were operational.

The operatives were launched in four double folding kayaks from a HTML fast crash boat, but the current carried them away from their landing position and the surf capsized their boats. The men swam ashore but both their radio and their signal torches had been destroyed, and the men had no way of connecting with the return crash boat. Soon their lost equipment was found by the Japanese and a massive search with 1,000 troops scoured the island. Quite soon seven of the eight men had been captured, killed or died trying to swim to the mainland and only one man, Sergeant 'Mick' Dennis remained.

Over the next three days he continued a one man war, fighting off Japanese patrols and living off the land. Unable to do this for long, he took to the dangerous shark and crocodile infested waters, and with the aid of a log, paddled to the mainland. Landing on a Japanese controlled beach, he snuck ashore and after further firefights and a difficult journey travelling west, he finally was found by an Australian patrol.

Mick Dennis was able to provide valuable information and for his service and bravery, he was awarded a Military Medal.

During the course of the war, Z Special Unit carried out 81 covert operations in the Southwest Pacific theatre. While the unit was disbanded after the end of the war, many of its techniques would be modified and used by Australian Special Forces to this day.

What listeners say about Secret and Special