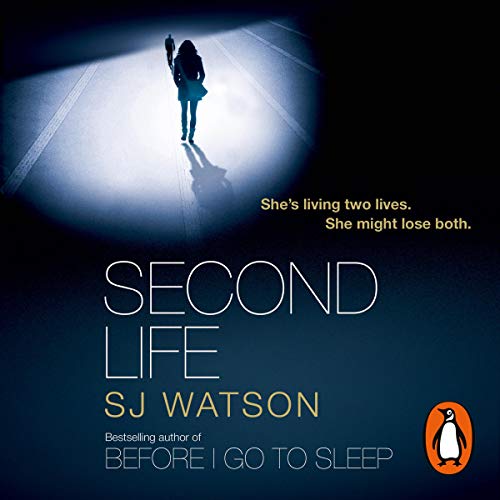 The sensational new psychological thriller from the best-selling author of Before I Go To Sleep ...

She loves her husband. She's obsessed with a stranger. She's a devoted mother. She's prepared to lose everything. She knows what she's doing. She's out of control. She's innocent. She's guilty as sin.

What listeners say about Second Life

I couldn't wait for it to end. Long drawn out story line with an awful ending. I loved his first book 'before I go to sleep' but not this one, not at all....I only finished it because it was a gift.

It’s hard to believe that this over-blown tosh is by the same author as Before I go to Sleep. The latter had an imaginative theme, even if medically unlikely, and gripped the listener throughout. Second Life starts reasonably well and I thought it might turn out to be a well-crafted story, even though I soon realised it would depend on the main character, Julie, making errors of judgment: par for the course in many novels. However, Julie soon behaves so idiotically as to be totally unbelievable. She keeps saying that she mustn’t do this or that and proceeds to do it. The writing becomes more and more dreadful in its extravagant physiological descriptions of Julie’s fears and anxiety that sound more like the description of a volcanic eruption than human emotions. She boils, explodes, floods, implodes etc., etc. It’s the kind of writing one hopes to grow out of. There’s some gratuitous sado-masochistic sex thrown in perhaps, because of the success of Fifty Shades of Grey, which I haven’t read but get the gist from all the publicity. I persevered in the hope that the overwrought writing would tone down but it didn’t. The story in the end is preposterous and I feel I’ve wasted hours of listening but at least I was always doing something else at the time.

The narrator is very good and I sympathise with her having to read this badly written and ill-conceived book.

Absolutely loved Before I Go To Sleep so was expecting a great suspense thriller. This seemed overly long - the first half especially with a totally ludicrous plot line, an unlikeable miserable whingy central character who talks in first person present tense which I find adds to incredulity, and a totally unsatisfying ending. almost like the author got fed up with it themselves and thought 'sod it'. I'm sorry but I got to the end and thought 'well there's 20 hours of my life I won't get back'.

I enjoyed S J Watson's 'Before I Go To Sleep', so thought this would be good - I was so wrong! It was totally unbelievable, I persevered right to the end because I kept thinking it would get better and there would be a huge twist - but no, it was totally predictable but went on and on! The only good thing about this was that I was listening on Audible and it was narrated very well by Imogen Church.

Preposterous storyline, unlikable characters. Tedious narration; the narrator clearly struggles with male characterisation. Very disappointing. This one is going back.

I can't imagine who would enjoy this slow, predictable, totally unrealistic tale.

Has Second Life put you off other books in this genre?

Who might you have cast as narrator instead of Imogen Church?

What character would you cut from Second Life?

I would probably add, rather than cut.

Wow, what a thriller indeed! Despite some of the somewhat mixed reviews of author SJ Watson's second novel, I was hooked from start to finish. It has a myriad of twists, turns and various red herrings.

Imogen Church's narration is excellent in regard to the female characters, although the male equivalents sound a bit dopey in my opinion. That said, she is able to convey the often tense atmosphere.

Yes I would, not necessarily because it's good but more be it raises interesting issues around identity and online safety.

The most interesting aspect for me was how naïve adults (and I guess most people) are around what they put online. I think many adults who didn't grow up with the internet or social media do have a tendency to see the 'real' and 'virtual' worlds as separate and for the most part harmless.Least interesting was the main character's addiction issues. I've known many addicts personally and professionally and this really simplified the plight and anxieties etc of the recovering addict. If it was a plot device to illustrate the addictive nature of the internet/social media then I think it was unnecessary.

Lucas - I think he really epitomised the dangers of social media. He's just your ordinary kinda guy who, on meeting him, you wouldn't think had those dark depths. But therein lies the danger - what exactly is a 'monster' meant to look/behave like?

Yes - just so the torture would be over!

I was expecting so much more after reading Before I Go To Sleep and I was greatly disappointed. I found it ludicrous in places and was very predictable, right up to the final twist.

An interesting story that keeps you engaged but a little thin and weak. Well narrated.

I'm not sure if my boredom with this sprang from an expectation of something as exciting as 'Before I Go to Sleep', or because it is actually boring, but I really did get fed up with it and stopped listening about 20% from the end. I found I simply didn't care. Middle class people with too much time on their hands spending a lot of time talking...and talking...and if they're not talking they're (gasp) using the internet to hook up with other people (and making decisions which are, quite frankly, not very credible and only there to push the so-called plot along). Very dreary. The narrator kept doing a really annoying "male voice", too.