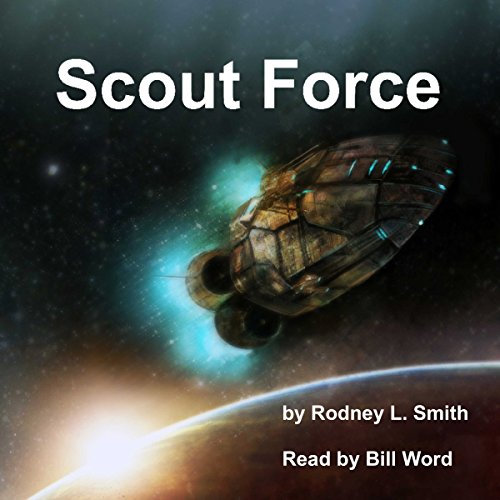 Book one in the Kelly Blake series: The future looks bleak for wrongly cashiered, fighter pilot phenomenon, Kelly Blake. His redemption comes as he is recruited into the elite and secretive Scout Force. Follow Kelly's adventures as an officer in the Galactic Republic Fleet's Scout Force, protecting humanity's frontiers from human treachery and the onslaught of the expansive and hostile K'Rang Empire.

What listeners say about Scout Force

Great book pity about the narration

I have been waiting for this series to be moved to audio for a while the books are greatly enjoyable. This is let down by the poor narration, no inflection, heightening of suspense mainly a monotone I hope these areas are addressed in the next book as it spoils what could be a very enjoyable series

I put this book down twice because of the monotone narration. I only returned to it out of desperation when I ran out of credits. Also, the main characters sexual encounters seems more like a teenagers fantasy than a plausible story.

Tried 3 times to listen to it. I then returned it

Story has promise but not with this narrator. I will probably buy the hard copy to read it.

I have never given up on a book , not once...until now. I have even listened to Tom Wopat Narrate and it wasn't as bad as "The Word" narrating, sadly I couldn't do it. I tried to get into the story but just couldn't follow along. There is absolutely no character distinction, he just drones on and on and on.

Would you try another book from Rodney L. Smith and/or William "Bill" Word?

Yes, the story had promise. I just hope this is Rodney Smith's first (or one of his first) book(s).

What was most disappointing about Rodney L. Smith’s story?

The story reads like it's a wish fulfillment of his juvenile (or current) daydreams.

The main character gets somewhat screwed in the beginning, but that of course turns out to be a good thing. He gets somewhat bullied by a superior officer but later gets his absolutely spot-on sweet-sweet revenge. Every attractive female in the book (despite the character describing himself as being "nothing to look at" and "not bad, but had never considered himself that good looking" is not only attracted to him - but very aggressively pursues him. On top of that, they're all OK that he doesn't want to be monogamous and are all OK with him dating around. Then, of course, there's the thinly veiled hint towards the end of the book after the girls meet one another (and all think that each other are soooo great) that he's probably going to wind up with a foursome out of the deal.

Additionally, over all there's no real conflicts for the main character to overcome. For effectively the entire book everything goes his way, all the time. He's the smartest, and best and etc, etc at everything. His superiors also immediately recognize this and give him all the kudos/rapid promotions/etc.

What didn’t you like about William "Bill" Word’s performance?

Everything. There's little discernible difference between the various character's voices. Females are read in a slightly higher pitch, but that's about it.

Mr. Word's reading of the story is soooooo rote and robotic, with unnatural sounding timing and what sounds to me like an over-enunciation of nearly every word. Add to that a near lack of emotion (or what I'd think a computer would sound like if it were trying to emulate what an emotion sounds like..)

Decent start to a series given all my caveats. Hopefully the author's writing matures more and they use a different narrator going forward. Alternatively, maybe Mr. Tin Man narrator will get a heart.

As many have already mentioned, the narrator of this tell is horrible.

He. Speaks. Every. Single. Sentence. Like. This. And. It. Can. Get. Very. Annoying. Very. Quickly., And after clearly enunciating each and every word so carefully, he often screws up the pronunciation of that carefully enunciated word. Sorry Mr Word, but you need to find another line of work if your intentions are to continue as a narrator.

One trick to get through this book if is do do what an earlier reviewer suggested. Speed up the playback. I kicked up the Audible playback to 1.10 and that was enough to get past Mr. Words plodding speech.

The story itself is decent, but predictable and a bit trite. And yes, I will reaffirm, juvenile at times. I get tired of the whole "Every woman the protagonist meets is beautiful and wants to sleep with him" thing.

Overall, if book two is released and does not have Mr. Word as a narrator, I will more than likely purchase it.

this might be a better book than i rated it ,but the narrator was so bad you could not tell.
i have had other books with him narrating and it had to get through them.

Narrator has got to go

Would you recommend this audiobook to a friend? If so, why?
Yes I liked the story a neat blending of old and new Tec.

Would you be willing to try another one of William "Bill" Word’s performances?
NO!!!!!!

Was this a book you wanted to listen to all in one sitting?
yes but had to stop because the Narrator made it sound like a Dick & Jane book

Despite the reviews complaining about the performance, I decided to give it a go. I enjoyed the story, as it's fun and shows potential for a good series.
Unfortunately I agree with many other reviewers - the Narrator, Mr Word, is not right for the job (at least not now). Mr Word's delivery is, most of the time, so unusually mechanical that it sucks the life out of it! He... pronounces... each... word... so... clearly... and... precisely....., that he forgets that he's telling a dynamic story to a group of eager listeners! I get the impression that he would read a workshop manual very well! Sadly this isn't a workshop manual! It's such a shame, because he has a really great voice and on those few occasions during "Scout Force" when you could tell he was starting to relax, the story flowed very nicely...but it just didn't last.
If Mr Word could relax more (perhaps a stiff drink would help!), it would make the "Scout Force" series much more worth the listen! Keep working on it!

It is obvious that Audible and Amazon allow full on shills for reviews.

There is no possible way anyone with ears could comment positively on this narration.

Odd pauses and weird pronunciations. Sometimes I wonder if 'Bill' is a native speaker of English.

Try reading the story before you record it. Did you record this in one take?

I've read the books 3 or 4 times, that's how much I like the series. that's the up, unfortunately the narrator makes me want to throw whatever device I'm using to listen with. he make a lively and really fu. book like reading a biochemistry text book, after party and drinking for 7 days with no sleep! You get my point? I swear pass on the audio get the book if it's the same narrator for the next one!