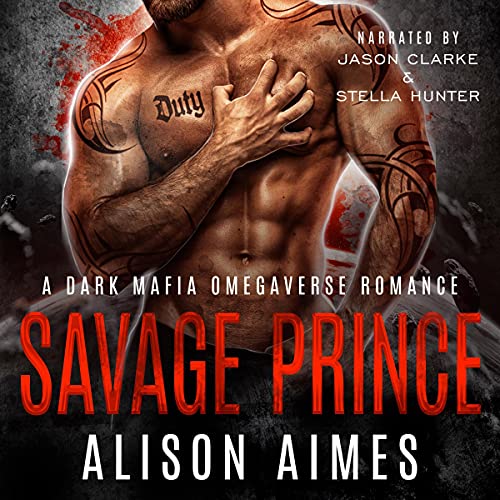 By: Alison Aimes
Narrated by: Jason Clarke,Stella Hunter
Try for £0.00

Dual narration by the amazing Stella Hunter and Jason Clarke.

He's a notorious crime lord - and he’s on the hunt for her.

He’s mafia royalty. Worlds above her. Ice-cold and merciless. Driven by duty and dark secrets.

She’s property. Expected to submit. Imprisoned by ruthless criminals determined to break her for information she can’t afford to give.

Except there’s something different about Maxheim Skolov. Something that awakens long-buried instincts within Tess and draws her toward the man inside the beast.

A force more dangerous than anything she’s faced to date.

But she won’t get far.

For mafia prince Maxheim Skolov, hunting down the rebellious, spirited female is a certainty. He’ll do whatever it takes to have her kneeling at his feet once more, even begin a galactic war.

The real question is what he’ll do with her - and to her - when he catches her.

Savage Prince: A Dark Mafia Omegaverse Fated-Mates Romance is the second book in the Ruthless Warlords series. It is a scorching-hot stand-alone, though it is recommenced to listen to the series in order for greatest enjoyment.

Like all the books in the series, it includes:

Book one in the series is Ruthless King: A Dark Mafia Omegaverse Fated-Mates Romance.

Forbidden Flame: A Dark Mafia Omegaverse Fated-Mates Romance is a stand-alone novella in the same world.

What listeners say about Savage Prince

Can’t wait for more in this series

This book 2 in the Ruthless Warlords series by Alison Aimes and just like the first I absolutely loved it! Also like the first I waited for the audio release and I am so glad I did as Stella Hunter and Jason Clarke knocked it out the park with the dual narration again.
This is a Dark mafia, omega-verse, fated mates romance so crosses all the genres which makes it even more tantalising, dark and delicious.
This can be read as a stand alone but I highly recommend reading these in order as they follow the Skolov family who are ruthless alien crime lords and in this book we are following Mafia Prince Maxhiem Skolov. He prides himself on always looking after the family and will destroy anything to protect them. Until he meets Tess who is involved in the killings of members of other Mafia families and they are out for blood. He would normally happily hand anyone over to be killed if it protects his family but as soon as he senses her he knows she is his fated mate and will do anything to protect her.
This was fast paced with lots of twists and turns. Packed with action and a lot of steam. Tess and Maxhiems chemistry was perfection and his caring side came out a lot faster than his brother Nikolai did in book 1.
There is a underlying thriller style story over the first 2 books of an unknown threat that continues into book 3. It’s really interesting and has you constantly guessing.
Can’t wait for the next book as Alexei is the brother that intrigues me the most. I’m scared something terrible happened to him in his past that he can’t bare to tell the family about. He is hiding something so painful and I can’t wait for his fated mate to heal his soul. 5/5

So we’re back in the wonderful Omegaverse Sci-Fi world where, once sparked, the Fated-mate bond changes paths, lives, purpose, priorities and personalities.. and Tess and Maxheim’s journey did all that and much more. An Omega slave used for her power to manipulate a dark force that turns man against man in a brutal war to their deaths. A cold, emotionally closed-off, ruthless Alpha Warlord on the hunt for a killer.. whilst also seeking revenge, looking for answers and the person who stole his twin siblings many rotations before. His family is everything to this loyal protector Prince and everything he does he does for them.. until his eyes locks on a silver-skinned beauty whose scent is siren-calling him from her cage. But, as with this talented author’s previous book, it’s a rocky ride for quite a while with enemies, betrayal, attacks, twists, brothers, others and new emotions clouding judgements, slowing the bond and making his Alpha possessive growls and declarations of ”mine.. mine.. mine“ so so much worse.

Worth a credit? Yes I loved it, there’s a very clever suspenseful web and world-building going on here as they work out their enemies from their allies whilst also doing a lot of hot ‘claiming’ and ’bonding’.. but it’s sweet, romantic and touching at times too. The character growth doesn’t come easy for this Alpha Prince and an Omega slave’s mental shackles will be hard to penetrate.. however, Maxheim will be the key to Tess’ emotional freedom. The Duet-style narration made the chapters flow so well and both narrators did a fantastic job.. but Jason (.. sigh 💕) well his vocal skills brings individual heartbeats to each and every male cast member, was the perfect voice of Maxheim as he roared or purred with his mated frenzy and brought the hunger, the mystery, the suspense, the danger, the thrills and chills, the hot and the heavy and the raw Possessive Passion (both with capital Ps) and love for Tess to life. Stella was the perfect choice too to highlight Tess’ vulnerability, emotional confusion, strength, courage and selfless love.

The second installment didn’t disappoint. Jason and Sella did a great job bringing the characters to life. There were many twists and turns and it was difficult trying to figure out what was really going on. Look forward to listening to the next book!

My ears are on fire

I couldn't stop listening. It felt like my hands were on fire, in a very good way.

I’ve been enjoying this series more than I thought I would. There is a recurring theme, during the development of the H and h’s relationship, but there is enough variation that I haven’t been bored.

Each book does have violence but, it’s not overly descriptive. The sexual interactions are descriptive and there are D/s elements; which is expected in an Alpha Omega relationship. If intense, descriptive and dirty love scenes bother you, find a different listen.

I think what appeals to me, the most, is the dynamics between the four brothers. They are quite hilarious and I can’t wait for the next brother to be shot by cupids arrow!