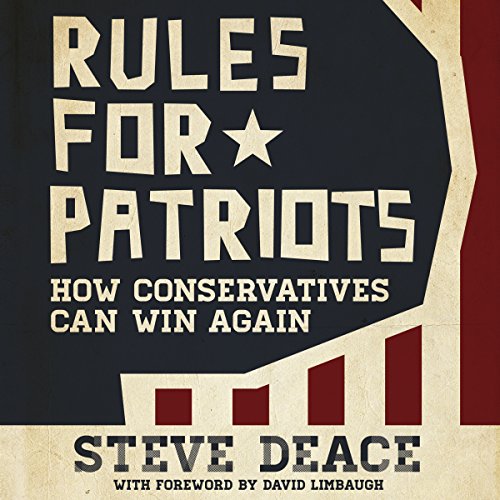 Time is running out on American exceptionalism. The light of liberty is flickering. At no point since we still had the Redcoats on our shores has freedom been more imperiled. This time it's not an invading foreign power that threatens us, but our own government gone wild - unhinged from its Constitutional limits.

Many great books have been written about what we should believe and why, or why the Left's beliefs are flawed, but never before has a book that shows how to do what we believe. Until now. The Left has its playbook, Saul Alinsky's infamous Rules for Radicals. Now the good guys have theirs. Endorsed by a who's who of the conservative movement, we present Rules for Patriots.

What listeners say about Rules for Patriots

Excellent in parts, good in others

It's normally a good thing to have a self-narrated audiobook - you get a sense of the author's character and personality. This is no different, but unfortunately suffers from some editing mistakes occasionally.

The book itself has some excellent insights along the way, with some great analogies - they're with the price of admission but are more like the cherry on the top of the cake, which is a bit less remarkable.

I think the most important thing it's given me is an understanding of the strength of feeling about the GOP's betrayal of conservatism - you can get a real sense of why Trump won the nomination and then the presidency.

Deace is surely right in the majority of what he says, and has sparked useful thoughts in my grey matter.

If you truly love your country, this is the way to take it back. The brutal honest truth is sometimes hard to swallow, but so refreshing to finally hear someone say it!! Go Steve go!!

Steve does an excellent job of laying out the myths and "tactics" we as conservatives have accepted as we go about our day to day lives. He then replaces them with truth and actual, solid truths that mirror not only the Chrisitan worldview that has and will prevail despite what culture says, but also the foundations of the constitution. He does not hold the constitution up as some holy book, but instead recognizes that it socially captures and places into action the realities of God's creation and his plan for his children. The tactics Steve gives us in this work are powerful. The issue is implementation. It doesn't take long to realize that if we want to bring our values back to the top, we will be doing a lot of praying for the strength to stand and fight. God bless Steve and all of his work to preserve freedom through a correct lens, namely Christianity.

Very smart information to act on

Liberals have ran the Politically Correct narrative and warped the thinking of the population for far too long.... time to reverse their talking points to use them against them.

Must read for Christian Conservatives

Steve Deace is a leading voice for faith filled conservative politics. This is a great book even though I disagree with Steve here and there.

While I fully enjoyed the message of the book, and agree with almost all of Deace's points, for a nationally syndicated radio personality, the production was sub-par. Deace was fine, for the most part, but it sounds like they did the whole thing in one take with no edits, which becomes distracting and annoying.

This is a must read for every Patriot

I have listened to this 3 times in just over a year. I literally sit and take notes as I am listening. We must use these rules and take back our country from the Leftists and the Republicrats alike.

Steve Deaces shows got my through 2020. I knew something wasnt “right” about Covid, GOP, etc so I started reading his books. This prequel to Truth Bombs is a must read. Highly recommended.

It's time for a constitutional conservative, Steve Deace nails the problem with establishment politicians. He lays out 10 rules that every conservative should follow.

A total waist of time

I read the other review here before I go thiis book. Don't believe them. I think they are by sock pupets or family of the author. I just finished listening and I hope audible gives me the credit back and I want my time back as well. Just because believe abortion is murder doesn't mean others have to believe it to be a conservative. The author is delusional praising the progressive Mike Huckabee (google his name and Micheal Obama is you doubt that) and saying that I am not a conservative while criticizing the tea party for not going after social issues . Check out Mark Levins Liberty and Tyranny or some other books by Levin, Beck, Savage, or Rush. Don't waste you time with this trash. If you want to waste your money and time or are a big social conservative go for itm but be warned.