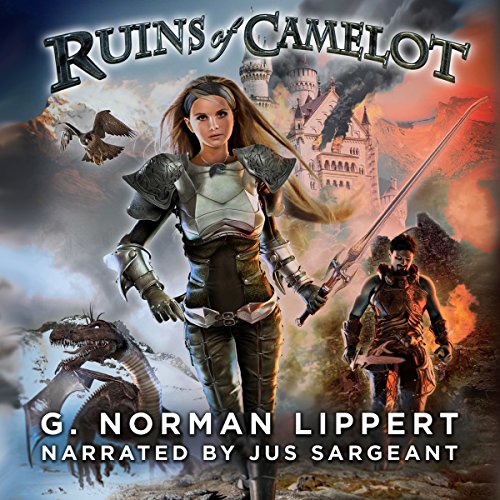 By: G. Norman Lippert
Narrated by: Jus Sargeant
Try for £0.00

As the kingdom of Camelot descends into complacency, an ambitiously sadistic madman known as Merodach advances his rogue armies, recruiting by the sword and threatening revolt. Eighteen-year-old Princess Gabriella is the only one who understands the severity of the threat, but she is powerless to convince her father or her brave commoner husband, Darrick.

With defeat all but certain, Gabriella sets out on a final, desperate quest. Her plan: to confront and defeat the madman, Merodach, before his armies can destroy everything she loves. Alone and on foot, she must cross the haunted magical wasteland known as the Tempest Barrens, where she is beset by mutant beasts, capricious magical creatures, and even the walking dead.

In the end, wounded and hopeless, Gabriella finally confronts her nemesis and learns his final, horrible secret: He is not alone, and the forces he has allied with are far more powerful than anyone could have imagined.

What listeners say about Ruins of Camelot

This is an absolutely fantastic book, I first came across this author when I read his James Potterseries, and I'm so glad he's written his own standalone novel. I love the imagery he creates with his writing, it almost feels like you're standing in the room with the characters. I would've liked it if her travels had maybe been a little bit longer, but overall I would say this is a great read.

This was such an entertaining and engaging read and definitely makes me want to read more by this author.

The summary says enough about the plot that I'm not going to add anything in case I spoil something, so all I'll say is that it's a fast paced, intense, magic filled, adventurous read. I loved how it was being told from 2 separate generations and how they collide. It was really well written and described and I thoroughly enjoyed it.

The characters were all well written and developed but my favourite was Gabriella. She was such a great role model. She was brave, loyal, impulsive but also kick ass and not afraid to do what is right.

In all, this is a really great read. It has everything a good book should and I look forward to more from this author.

Jus Sargeant did a good job with the narration. There was enough different tones for each character that I had no problem following who was talking.

*I received this for review. This in no way affected my thoughts.*

I received this audio book at no cost in exchange for an honest review courtesy of audio book boom.

Ruins of Camelot is a fun take on the Arthurian myth and a fall of Camelot that happens long after Arthur. The characters are engaging, the plotis fun, and the weaving back and forth between times is well executed. The narration is also superb. All in all, I highly recommend this one.

Not your every day Camelot story.

Would you listen to Ruins of Camelot again? Why?

Most certainly. The story line flows really great and the characters are quite unique in their ways.

The 2 old wizards were mine. Typical old cronies that didn't know if they say to much or not enough.

Which character – as performed by Jus Sargeant – was your favorite?

Again the 2 wizards. He gave them a personality all their own. Enjoyed that segment the best.

I did listen to it in one day, but had to do some honey-do's, otherwise it would have been 1 sitting.

An ambitious little tale that attempts nothing less than the origin of vampires, the demise of Camelot, and secret cameo appearances by the founders of a certain famed Magical School for Witches and Wizards. If you ever wondered what became of a certain snakey founder, this story offers an intriguingly creepy possibility (surely based in the author's world famous fan-fiction).

I really loved the story. A nearly flawless continuation of King Arthur and Camelot's story.

What a beautiful prequel!

I didn't even know it was a prequel until I listened! Read Merlin's Gift at www.jamespotterseries.com - then listen to this. Oh! So perfect.

Gabriella grows up a princess with a father but only a nursemaid for a mother. She has a core group of friends who go through school with her and help her forget she's destined to one day rule the kingdom. She lives under the shadow of Merodach, who starts as a whisper and slowly builds an army to challenge Camelot. By the time Gariella's father is ready to believe Merodach is a threat, it's too late. But Gabriella is not ready to give up or give in. She knows that she alone understands what must be done to save the world from an evil, sinister man.

This was an interesting take on the King Arthur legend. It is later than Arthur himself, after his descendants have lost the wizards and forgotten what King Arthur fought for. It was light but entertaining with cameo's from some interesting characters from other stories who help Gabriella on her way to destroy Merodach. This is YA and appropriate for all ages as it keeps the relationships pretty clean. There is one description of Gabriella's wedding night that doesn't go into too much detail.

The narration by Jus Sargent was good. He captured the tone of the story well and delivered the dialogue with finesse. I listened on 1.5 speed and it was perfect.

I received this audiobook for free in exchange for an honest review.

Which character – as performed by Jus Sargeant – was your favorite?

Again the 2 wizards. He gave them a personality all their own. Enjoyed that segment the best

Skip the the Prologue..

Would you listen to another book narrated by Jus Sargeant?


This is a good fantasy story with a strong Princess, Gabriella, and is a quick and engaging read for fans of King Arthur and that time period.

Even though this book is the first in this series, it could read as a stand alone book.
I'm intrigued about book two.

One thing that I did not like, the Prologue, it gave away too much.

Jus Sargean did a good job with the narration of the different character voices.

Note:
"This audiobook was provided by the author, narrator, or publisher at no cost in exchange for an unbiased review courtesy of Audiobook Blast."