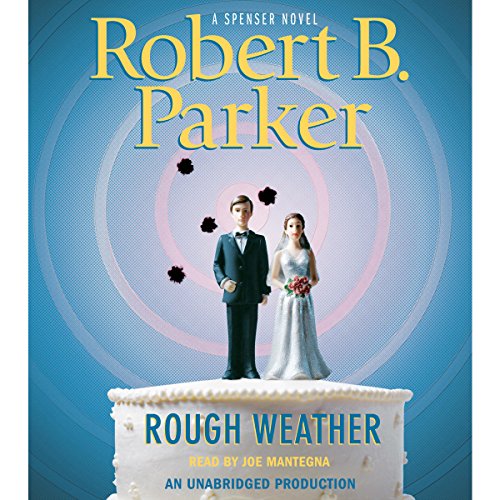 By: Robert B. Parker
Narrated by: Joe Mantegna
Try for £0.00

Heidi Bradshaw is wealthy, beautiful, and well-connected - and she needs Spenser's help. In a most unlikely request, Heidi, a notorious golddigger recently separated from her latest husband, recruits the Boston P.I. to accompany her to her private island, Tashtego, for her daughter's wedding. Spenser is unsure of what his role as personal bodyguard will entail, but he consents when it's decided that he can bring his beloved Susan Silverman along.

It should be a straightforward job for Spenser: show up for appearances, have some drinks, and spend some quality time with Susan. Yet when his old nemesis Rugar - the Gray Man - arrives on Tashtego, Spenser realizes that something is amiss. With a hurricane-level storm brewing outside, the Gray Man jumps into action, firing fatal shots into the crowd of wedding guests and kidnapping the bride - but Spenser knows that the sloppy guns-for-hire abduction is not Rugar's style. Unable to prevent the attack, Spenser will stop at nothing to recover the kidnapped bride and figure out how the Gray Man is connected. It's up to Spenser to decide who the real enemy is . . . before more people end up dead.

“Rough Weather is bliss.” (The Spectator)

“Comically acerbic...the reader is treated to all the familiar pleasures...Spenser sitting in his office overlooking Berkeley Street in Boston; the knock on the door announcing a client; Spenser's rapier repartee with client and suspects; the return of his love, Susan, given a larger role here; the always amusing interplay with the mercurial Hawk, Spenser's muscle; and Parker's graceful descriptions of interiors, meals, and clothes.” (Booklist)

What listeners say about Rough Weather

He Said, She Said

I really like reading Parker, its kind of strange, you quickly forget you are reading. Have seen some of the made for TV Spenser movies with Joe Mantegna, they are good (Mantegna's build doesn't necessarily say hard guy, but closer to the book than the old Urich series), so I have no problem hearing Mantegna narrating. The problem is all the "he said", and "she said" at the end of each sentence. It makes it harder than any other Audiobook I have heard to get immersed. My 2 cents.

Spenser is invited to a wedding and gets caught up in a kidnapping, a hurricane, and the inner workings of one of the most dysfunctional families in fiction. It is also the third appearance of the gray man, or Ruger which is the name he goes by. This book also features Hawk for the last time in the series; which is a shame. Hawk has to be one of the most iconic characters in modern fiction, his absence from subsequent books in the series seriously detracts from those future works. A few of the earlier books are better than this one, but Rough Weather still merits five stars.

For an avid reader of crime fiction, this may sound funny, but this is the first 'Spencer' book i've read or listened to. I thought it was a good story, and the characters were interesting, though the sarcasm and macho attitude got a little tiresome. (And yet sometimes, it was pretty funny too.) I might read another in the series someday, but won't rush out to do so. For narration, i like Montagna's voice generally, but found it a little flat. There's a lot of "he said" and "she said"s too, and i'm not sure if that's the writing, or if some narrators can leave a little of that out when they alter their voice for the characters... Not sure, maybe it's just more noticable here, but i didn't care for that. Would i recommend it? Depends. Certainly it's short enough to try out and see if you like... And if you do, there's plenty more.

Another Tale about Spencer

As a long time fan of the Spenser series, (I read my first Spenser novel, in 88 or so), I always look forward to the newest adventures of the glib Boston PI.

Rough Weather gives Spenser fans what they want. Spenser, Hawk, Susan are of course part of the story. Cameos are had by series regulars like Quirk, Belson, Rita, and Henry Cimoli.

Parker should be praised for resisting formula, which after so long with a character is a real danger. That said, the newly introduced seemed two dimensional. Everything there is to know about what makes Heidi Bradshaw tick is revealed very early on. (I would hazard a guess that in 3 months I won't be able to tell you anything about any character in the book who hadn't appeared in a previous novel.

Don't get me wrong. I'm a huge fan, and any chance to catch up with one of my favorite literary characters is welcome. This is a perfectly satisfactory Spenser novel.

This is a good Spenser story tieing in previous characters. I enjoy Joe Mantegna's performance. I wish they would have him re do the early Spenser books.

Yet another great Spenser book

Great listen. Another classic Spenser book. Robert B Parker at the top of his game. Spenser Hawk battle the Grey Man yet again.

My husband & I both like Robert B. Parker stories & have listened to quite a few on road trips...this was our favorite! Excellent story line & Joe Mantegna is awesome as a narrator! This story had lots of twists & turns...I would definitely recommend it.

Would you listen to Rough Weather again? Why?

I have listened to it twice already. I really enjoy the humor, style of writing and characters, not to mention the action. I just wish they were longer books.

As it always does with Parker's books. You never know what Spencer is going to do. If he's an outlaw or a citizen.

Which character – as performed by Joe Mantegna – was your favorite?

Spencer without a doubt. Joe Mantegna had big shoes to fill following the death of Robert Urich. Joe was the perfect choice to read these books.

Where does Rough Weather rank among all the audiobooks you’ve listened to so far?
Rough Weather is one of my favorite Spenser books.

What did you like best about this story?
The Spenser books with The Gray Man in them are always enjoyable.
Which character – as performed by Joe Mantegna – was your favorite?
I love the life that Joe Mantegna gives to both Hawk and The Gray Man.