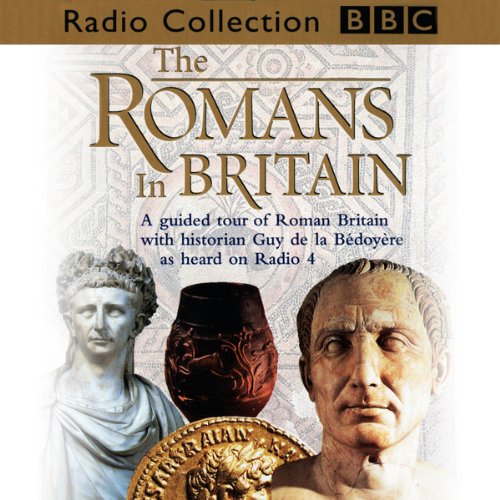 A guided tour of Roman Britain with historian Guy de la Bédoyère, as heard on BBC Radio 4. In 55 BC, Julius Caesar invaded Britain, which was then on the edge of the known world. But he was unable to conquer it. Where Caesar failed the Emperor Claudius, in AD 43, succeeded and the mighty Roman Empire came to stretch from Cairo to Carlisle. The Romans in Britain tells the story of 400 tumultuous years under Roman rule.

A colourful and cosmopolitan people, the Romano-British created a unique corner of the ancient world by merging their own Celtic traditions with the sophistication of Roman civilization.

Presented with warmth and wit, historian and archaeologist Guy de la Bédoyère takes us on a fascinating tour through Britain which is as much an adventure in social geography as it is a lively and surprising history.

What listeners say about Romans in Britain

Guy de la Beydoyere is a great guide to the Romans in Britain. By co-opting a horde of modern experts and academics, each aspect of the Roman occupation is given a new lease of life, from buildings to trade and religion. Clearly the subject is greater than a three hour programme can properly cover, but this was three hours well spent.

This BBC radio series is a good and informative look at the Romans in Britain.

This programme really wants to paint the Romans in a positive light, as a civilising force generally welcomed by the locals. This contradicts with the stance of other historians I've read. While I don't mind different approaches to history, I would have appreciated if this programme had acknowledged it's stance was debated. As is, it just feels misleading

This is yet another addition to the ‘Ancient Rome is not just for the intellectuals’ and ‘them Romans were just like us” oeuvre. As stated in the title of this review, while the narrator is condescending in his links, the contributors are refreshingly informative, direct and detailed with their explanations- they are probably more used to dealing with the general public and do a lot better then the narrator’s feeble attempts. As such, the whole series would be better without Guy.

loved it. humourus in parts. straight forward. But has some great experts who throw up fantastic detail.

If you want a very good book on the Romans occupation of Great Britain then this is it. It is really great as an audio book. The narrations are easy to understand and grasp. Highly recommended.