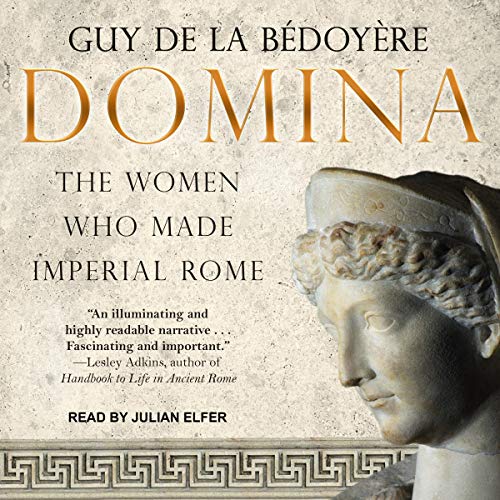 Augustus, Tiberius, Caligula, Claudius, and Nero - these are the names history associates with the early Roman Empire. Yet, not a single one of these emperors was the blood son of his predecessor. In this captivating history, a prominent scholar of the era documents the Julio-Claudian women whose bloodline, ambition, and ruthlessness made it possible for the emperors' line to continue.

Eminent scholar Guy de la Bedoyere, author of Praetorian, asserts that the women behind the scenes - including Livia, Octavia, and the elder and younger Agrippina - were the true backbone of the dynasty. De la Bedoyere draws on the accounts of ancient Roman historians to revisit a familiar time from a completely fresh vantage point. Anyone who enjoys I, Claudius will be fascinated by this study of dynastic power and gender interplay in ancient Rome.

What listeners say about Domina

I really enjoyed going over this well known historical period from an alternative viewpoint. Whilst the narrator has a pleasant voice, he did seem to be reading too fast at times, which made concentration a bit hard.

You would think this would be a great listen, sadly you would be wrong

one tedious fact connected to,another and their lives slide away under an avalanche of detail..

A book for academics . Ps a tedious robotic performance does not help

This book was an excellent read and wonderfully narrated! I would recommend it to anyone interested in First Century to Third Century Roman history. But most of all, to any readers interested in the very strong part Roman women played as movers and "kingmakers" during that age.

History can be dry, at least for me. I found this enjoyable and very interesting. Highly recommend if you are curious about Roman history.