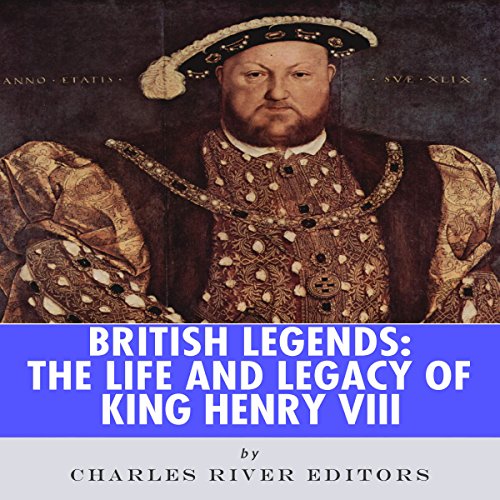 British Legends: The Life and Legacy of King Henry VIII

British Legends: The Life and Legacy of King Henry VIII

"We are, by the sufferance of God, King of England; and the Kings of England in times past never had any superior but God." - King Henry VIII

A lot of ink has been spilled covering the lives of history's most influential figures, but how much of the forest is lost for the trees? In Charles River Editors' British Legends series, listeners can get caught up to speed on the lives of Great Britain's most important men and women in the time it takes to finish a commute, while learning interesting facts long forgotten or never known.

Over 450 years after his reign, Henry VIII is still the most famous and recognizable king of England, but it's for all the wrong reasons. Though well regarded by contemporaries as a learned king and "[O]ne of the most charismatic rulers to sit on the English throne", he is best remembered today for his gluttony and multiple marriages, particularly for the gruesome way he was widowed on more than one occasion. Naturally, that was the focus of a popular drama series centered around his life.

Henry VIII will probably continue to be best known for beheading some of his wives, most notably Anne Boleyn, so it is somewhat fitting that his most decisive act came as a result of a marital mishap. Sharply at odds with the Catholic Church over his attempt to dissolve his marriage with Catherine of Aragon, Henry VIII ultimately broke with the Church and established the Church of England, which forever altered the religious history of England, the social hierarchy of the nation, and its empire.