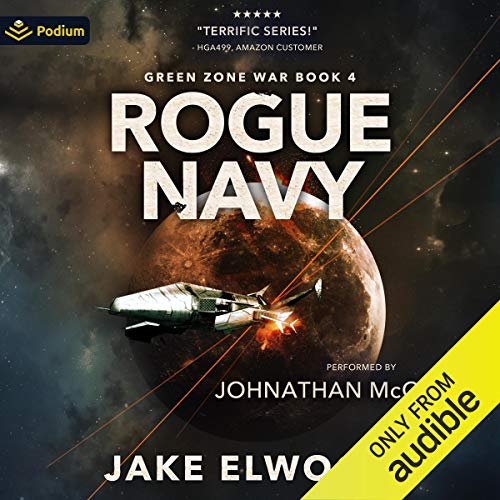 By: Jake Elwood
Narrated by: Johnathan McClain
Try for £0.00

The Dawn Alliance and the United Worlds are locked in a bitter war over the rich worlds of the Green Zone. The colony of New Panama is caught between the giants, and Tom Thrush has the impossible job of leading her rag-tag navy in a desperate struggle for survival.

His fleet is a mix of armed freighters and salvaged warships. The crews are former pirates with no military training. His enemy has the most powerful navy the galaxy has ever seen. With no hope of victory, he fights just to postpone annihilation.

But these are the famed rebels of the Free Planets, tough and resourceful and hard as rats to kill. They might not count for much in a straight fight, but they know a thing or two about tackling impossible odds. If Tom can earn their respect, they might just teach him something about survival - or even victory.

What listeners say about Rogue Navy

really good, looking forward to the next one.

its amazing how it blocks out cabbages on phones, listening to girl fights and ouch my balls shows...

a good story that keeps getting better

I struggled through the first couple of books but they were free and I need a credit so three came along and it was quite good the story really started to come together . this was as entertaining as prison planet lots of space warfare and strategy. I'm hoping the next book follows the trend.

what a great continuation of the saga.

this book hits on all cylinders. just like the whole series. action drama emotion it's all here. suspense is key as well.

Why are they using light arms ammunition on spaces

It's a good book but some technical details like the distance measurements and gun calibers.

A great book with great narration. I have throughly enjoyed all the books but number two and even it was still good.

I hope people don't pass up the rest of this series based on some of the negative reviews for the one before this book. That was alot different, lacking the frequency of space battles, but I found it wasn't that bad & this one certainly returns to the features & format that those people fell in love with originally, so try the last one & whether you do or skip it, be sure to continue on with this one! And, as before, the narrator does a fantastic job.

It's got nice mix of world & character development & battle action. Tactics & ship fights & takeovers. Struggles of the smaller independent planets in alliance with another less malignant massive planet conglomeration (that had, until recently, been their perceived oppressive enemy). They fight (somewhat) together in an uneasy alliance for freedom against a massive totalitarian oppressive regime, with struggles that presents.

I like that, in this series, & this book specifically, nothing is easy. The alliance is more realistically presented than in many other series, which have one brilliant hero who brings everybody together, still bucks establishment & easily wins the day against all odds. Not so here.

This series has the MC, originally in the Naval Service of that big government ally, now has been summarily discharged for disobeying orders, instead of getting away with it. He's goes on to join the independent smaller fringe planet's newly formed tiny Navy, formerly seen as rogue pirates by the "big brother" Navy he came from.

Instead of being instantly accepted & doing a great job, he struggles with feelings of alienation from both groups. He makes a lot of mistakes, but learns from them & his growing pains aren't easy. There's still out of the box thinking, a lot of hairy situations & they don't win every battle. Even when they do, the victories aren't always seen as joyous occasions, but are strongly tempered by the high costs involved. None of that is glossed over or just given summary lip service.

That's part of what makes this series stand out alot more than others on Audible & makes it more interesting & enjoyable for me. Even though it's more serious than many, it's not done in a heavily depressing way. I like that as a battle starts you don't know if they're going to win or lose the day. A death of a shipmate is done impactfully, without resorting to overly descriptive blood & gore, but with just enough realism to drive the point home, & not overwhelm.

Another thread in this series that's interesting is his take & presentation of the MC's Native American history & culture as it's changed through time & into space travel. Like a scene where he's perceived differently (with reverence he feels is undeserved) because he grew up on a reservation on Earth by a Cree group born on a distant colony planet.

His perceptions & his feelings on their perceptions is an interesting piece of character development. Most of the story I don't even remember he's a full blooded Cree, or any kind of Native American. He doesn't seem to be anything but a generic non ethnic person (maybe that's intentional?)

There's no mentions of things people typically use to portray Indians. For example, say, a dream catcher over his bunk, pics of the Reservation or the 1st Space Tower in his cabin, or preferences for Indian specific dishes. No mention of skin tone or cultural/spiritual related rituals, Holidays, meditation chants, songs or anything that might indicate ethnicity.

Just occasionally a random scene where he's visiting with Cree colonists. It's odd because these scenes just sort of pop up, in what, it seems to me, to be out of nowhere. There'll be a scene of another character relating to a Naval situation, then abruptly it goes to the MC at a party where they talk about the Colony's vegetable preferences, & later it turns out all of the guests are Cree (when I, at least, don't even remember there had been any mention of a Cree community on that planet prior to*). Then they have a discussion of a Cree Ritual done as a young child & whether they're doing it the same way as the original Crees on Earth, the home planet.

Anyway, I only bring it up as an example of how this series is set apart from others. Not just because the main character is Indian, - Native American's get a lot less coverage as a 'minority' figure in general as well as in fiction, (so I'm really happy to see that), - but because the writer's treatment of it is seems so non traditional, IMO. It doesn't read as stereotypical or an affectation.

This book gives us more of some of the minor, or side, characters too. A few of them get their own threads & more character development too. Personally I also like that there's no Romantic figure for the MC. No falling in love with a fellow officer.

There's some females of passing interest & a hint in this book of he might be developing an attraction to one of the main side characters that I thought early on would become something but then went in a totally different direction, but in this book there's involvement, just a growing respect for her capabilities & character. It's hard to tell.

That's the last point I'll make - that I don't always know how something's going to turn out. I like that it's not completely predictable, or at least not predictable in the way you think it's going to be predictable, if that makes sense! That's a refreshing change from many of the other series I've come across lately.

I can't wait to see where the next book takes us & am looking forward to the ride! If you've come this far, it stands to reason you already like the series enough to read the next. You're probably smarter than me & didn't stop to write a review & just got on with the next book, but if anybody else is reading reviews ahead to get a feel for the whole series, I hope this review has helped you decide, yes, this will be a good series.

If you have the Plus Catalog, as of April 2021, most of these are in it, so you have nothing to lose but your time if you find you don't like it. Personally, I think you will. If there's more to this series after the next book, I'll be buying it.

* Foot note - In all fairness to the author, I listen to books as I'm going to sleep & rewind to where I last remember when I wake up. It's possible I might be wrong. I might've accidentally missed a portion of the story that made the subject of that scene not so random/out of place as I thought.

Very good book. I highly recommend it. I'm Definitely looking forward to the next book in the series ( Rogue Battleship)

I love this series not the usual military sci-fi. very interesting character development and a fast paced story.

Better than book 3 in every way.

It's a fantastic series, the author has done a great job of making a big bad enemy and a realistic main character and a weighty story that feels like it has real substance.