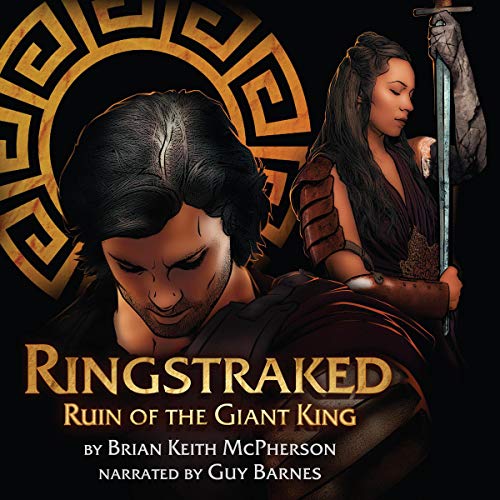 Ringstraked: Ruin of the Giant King

From the Drowning of the Earth, nations are born. Old fathers become kings. Early generations live for centuries. Later generations are dying younger. Giants roam. But the gods are weary of the wars of men. To banish war, they intervene. From the sons and daughters of men, they choose champions. To each champion, they give a peculiar gift, shared by no other. And upon each champion, they place also a peculiar mark, which no man can forge. By this all men know them, for they are Ringstraked. By rite of single combat they stand or fall, to thwart the avarice of kings and the cruelty of giants.

But to the east lies Babylon and the Giant King, Imrodin. There, he waits in the shadow of the Tower of Heaven. For the gods have torn the nations from his grasp. But he will not wait forever. To stop him, the King of Heth must raise an army carved of many nations. At his side is Isila, champion of Heth, the Woman of Stone. Together they march north to conquer Thrace, but first they must face the aging King Herapses and his champion, Casban, the Rider of Winds.

What listeners say about Ringstraked: Ruin of the Giant King

“No man lives without regret”

A good story, filled to the brim with fights and magic. It’s quite the saga with lots of character building. Sometimes it feels like an Aesop fable and is a bit matter of fact, but that soon disappears when the next fight comes along.
Well narrated with easily distinguishable character voices.
This is my honest opinion on a free review copy.

I received this book via a promo code and this is my voluntary review.

Brian Keith McPherson uses the the age-old power of storytelling to weave a tale worthy of ancient texts to bring us this saga of Giants, glorious battles and Gods. The world building was rich and the strong characters skillfully brought to life by Guy Barnes made this an epic story.

Once started, I could not stop listening. This itself is a sure sign of a good audio listen. The characters, their dialog, the actions, and detail of the world just gets more and more detailed. Really got my money’s worth from this one. Took me all of last weekend from start to finish, a sign that I really enjoyed it given the length of this story.

This is a highly developed epic novel. I really enjoyed the intricate detail and historical background, making the fantasy world all but real. I’m a big fan of epic fantasy novels and this hit nearly all my sweet spots. It will be interesting to see how the author develops in his next works.

Highly enjoyable - a great novel to listen to

This is a very well narrated audiobook. The story itself is huge and a mighty listen. The whole word conjured up works very well and the listener interested. Really liked Guy Barnes narration to it, too

Ringstraked is a wonderful full world and is very detailed. If you like that kind of book then you should give it a try.

This book is not to bad. The good thing is that it is a very well developed story. The characters are rich and you come to love and cheer for them.
The bad thing about the book is that in some place the story just drags, there can sometimes be to much detail in a book. The narration of the book is awful, the narrator tries hard to do different voices but fails badly. If it wasn’t for such a great story, I may have stopped with listening to the narrator.
Over all the books isn’t to badly written. It’s fun and lively. I do love the characters that the author has created. I would suggest to anyone to either listen or read the book.