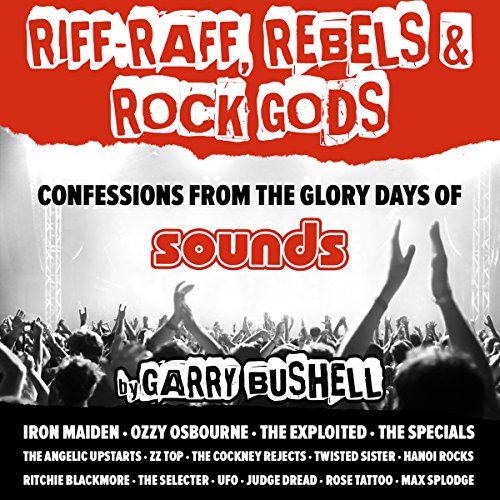 Riff-Raff, Rebels & Rock Gods chronicles the rise of the most exciting generation of British music and musicians the world has ever seen - before or since. In rapid succession came Ska, New Mod, anarcho-punk, Oi, and the New Wave of British Heavy Metal. A firestorm of incendiary music, created and performed by geniuses and madmen. What a time to be a music journalist! At the heart of this rock tsunami was SOUNDS magazine. And at the heart of SOUNDS was your narrator, Garry Bushell. Like his idols, Garry lived every day as if it was his last. Which it nearly was. Fed heroin in India by Hanoi Rocks. Going to chokey with the Angelic Upstarts. Getting his eyebrows shaved off by Ozzy Osbourne. All in a day's work for Garry. These were truly days of glory. The Specials. The Selecter. 2-Tone visionary Jerry Dammers. Garry was right there at ground zero. The Exploited. Twisted Sister. Rose Tattoo. Iron Maiden. A unique explosion of raw and exciting bands, giant characters and radical ideas. You'll meet them all. Riff-Raff, Rebels & Rock Gods is a brilliant new memoir from a leading rock journalist about the golden years of rock music: a unique moment when Rock Gods really did bestride the earth. Or thought they did.

I love autobiographical books especially about music or musicians . However this was just horrible & just vile in places. I found the part when it described the murdering of a cat near the beginning extremely upsetting. I couldn't even finish listening to the end.

I really didn't enjoy this...

I love band-lore. I've listened to heaps of music books and autobiographies, but this one just annoyed me.

The stories are boring, and the delivery is bad too. The speaking is too fast, and the writing style is annoying.

If you could sum up Riff-Raff, Rebels & Rock Gods in three words, what would they be?

Honest , Funny, Cutting edge. I always used to get Sounds, every week from about 1978 until it finished. Mr Bushell was always funny in his reviews and interviews with the stars and not so well known of the day.

Remembering the way he would write the brtal truth about his exploits with the musos, Legendary drinkers Pete Way , Ozzy et al come across as comedians on stage and after seeing them a few times its true, they are a bunch of nutters. Pete is a really nice guy, i've met him a couple of times, offered him a free drink once and he refused !!! he was busy though. The Iron Maiden section is great and even the bits about Ska bands are goood to listen to although the musics not my pint of bitter. The relentless piss taking of the hapless Ross Halfin (Gross Halfwitt) is a joy to behold

What does Garry Bushell bring to the story that you wouldn’t experience if you had only read the book?

Even more humour the way he reads it, I could invisage meself in a pub with Gal telling me these stories over several pints of Courage Directors and some cheese n onion crisps.

Laughed all the way through it, at some moments i had to pull the wagon into the side of the road and laugh.

If you liked Sounds in the 70's /80's, get this , its just what it used to be about, even down to the NME knocking, i did buy that thing once when they had AC/DC on the cover in the 90's. only time ever. Sounds was a big influence on my musical tastes and Geoff Barton and Gary were probably the biggest 2 writers that did influence me. BUY THIS QUALITY ITEM.

Riff-raff, rebells and Rock on!!

If you could sum up Riff-Raff, Rebels & Rock Gods in three words, what would they be?

The 'Behind the Scenes' feel, sharing tales from the road.

His voice is clear and easy to listen to. His Ozzy Osbourne impression isn't as bad as he thinks.

I laughed so much, it is filled with comical stories and memories.

Can't recommend this enough. If you love autobiographies and rock n roll, this is for you!

What made the experience of listening to Riff-Raff, Rebels & Rock Gods the most enjoyable?

I've never read a Music magazine, and some of these names were familiar, and some were old favourites, but others were less familiar; UFO, and The Angelic Upstarts (never heard of them, even though they came from South Shields and I'm from Durham. Should I be embarrassed? Probably) So I learned something new and I especially enjoyed the culture mashings of the travelogues. This was where the book really came alive for me: the stories of Hanoi Rocks touring in India; the narrator's meeting with a Loki-like Ritchie Blackmore in Helsinki; his time with The Selecter when they toured in Texas (an alarming experience for the band) and with ZZ Top in Las Vegas, the narrator flying in by night to see the neon city rising blazing from the huge darkness of the desert. The audio quality is excellent. It's a fast paced delivery throughout, lavishly peppered with metaphors and jokes. It's colourful and gets as messily basic as you'd expect, and full in your face; there'll be few surprises in that respect. The real business: mastery of performance; the musical magician-ship on stage sometimes runs only just ahead, of the excess, mess, and occasional carnage behind stage. They play with fire and some of them get burned.

I liked the hinterlands of travel and history that provided the background and sometimes, the motivation behind the music.

It's fast-paced, friendly, even matey, and full of jokes and wise-cracks. He shows warmth in giving an industry leg up to the edgy, blagging but somehow likeable new comers, the Cockney Rejects. He exhibits something close to fear, understandably in meeting a notorious prankster on unfamiliar turf; the musically sophisticated Ritchie Blackmore, who is showing signs of growing rock-weary; his mind and perhaps his musical attention turning to folklore, legend and the paranormal. Bushell's regard for ZZ Top is a bow to a band where he says, musicianship absolutely comes first.

There were amusing things and upsetting things. A beggar in India with no tongue, cut out when he was little. Mostly, I found myself wondering or remembering what I'd been listening to, in 1997 or 1986 or whatever. I did a lot of looking on You Tube in between listening, looking up the bands I didn't know.There were ewwwww! moments, as with the meeting with Judge Dread, but the title is a warning, and it's squalid but not vicious. Some people might be amused. Assuming you're an adult listener, it's nothing you never heard of before.

I see now, how 'Blackmore's Night' came about. I rather like it, but I wonder what Garry Bushell would say about that musical development following 'Deep Purple' and 'Rainbow'.The reason for 4 stars rather than 5 is due to the fact I sometimes got tired of the fast pace. I listened in three sessions, and maybe I should have spread it out. I'm a very fast book reader and I've never listened to an audio book before. This one came highly recommended by a friend so this was new territory. I still feel the book would only have been stronger with a bit of pruning back, and with some slower stretches, giving a a little more wider industry background or context of band A or B to rest the ear and add extra value.Other listeners might well not agree.