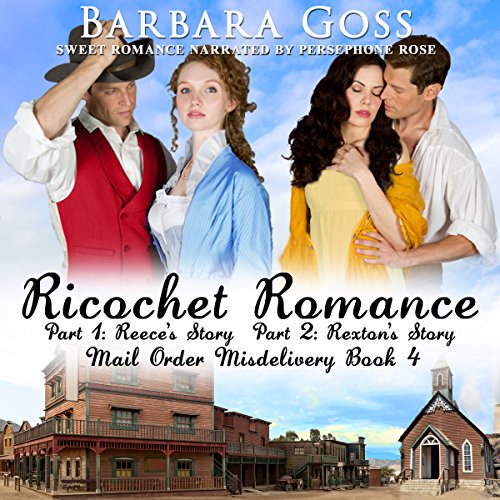 Books in this series can be read in any order.

Twin brothers: one is troubled and the other is trouble.

What sort of a twin leaves his brother, a troubled man, to deal with the impending arrival of his mail order bride? Reece threatens to pay for her return to Pennsylvania, but his father falls ill, and he needs to hire her as his father’s companion. Reece’s past haunts him and he vows to stay clear of Maggie. Will he succeed?

Rex aids a feverish woman who was put off a train in Hays. Her destination had been Colorado to meet her intended. When Rex finds a Colt .45 in her reticule, he wonders what this woman might be up to. Why would a woman riding with a mail order bride group carry a gun? Rex is repulsed when he discovers the reason.

The stories are set back in the days of the mail order brides. Story #1 is Reece's story. Reece is the responsible one...his brother races into his office and says that he got a saloon girl pregnant and he's getting out of dodge...and, oh by the way, he sent for a mail order bride but he won't be around to meet her. Maggie does not have any prospects in her PA town so she responds to an ad for a mail order bride. She has enjoyed corresponding with Rex and can't wait to meet him. However, when she arrives, she learns that Rex has left town. Reece decides to assist Maggie, until she can afford to purchase a ticket out of town, and hires her as his father's caregiver. Over time, Reece and Maggie are attracted to each other but Reece carries the guilt of killing a man in a duel. Turns out that Reece had been, unknowingly, courting the man's fiance' and the man found them and challenged him to a duel. Reece believes that he is not good enough for Maggie. Of course, once the temptress, Betsy, is back, she starts to pursue Reece and he claims that he's engaged to Maggie. I like that this story focuses on forgiveness. Reece must learn to forgive himself in order to move forward with his life. Sweet HEA. Story #2 is Rex's story. Rex returns to Hayes and plans to renovate an old hotel. He rescues a young lady, who is on her way to Denver, but is put off the train in Hayes, due to illness. He can't leave her with Reece and Maggie because Maggie is pregnant and can't be exposed to illness so he decides to have her at his house until she recovers. Jenny awakes to find herself in a stranger's home, but she really needs to get to Denver. In order to do that, Jenny has to find a job, but that is proving difficult without any prior work experience. Jenny has secrets...one of which is huge and leads to town gossip. This story is also about forgiveness. There is a bit of drama with Betsy, again, and the mystery surrounding her father and former fiance', but nothing too intense. Rex turns out to be a stand up guy after all and we get a wonderful HEA.

This story was nice and wholesome. It was great because you get 2 stories in one. Two brothers who seems totally opposite of one another find love. This was my first book by this author but will definitely not be my last! I was given this free review copy audiobook at my request and have voluntarily left this review.

Is a well written . About twin brothers named R J. Reece is determined to never married till he meets Maggie.

If you're looking for a sweet Western Romance this is the listen for you! Richochet Romance had interesting and likable characters and a sweet romantic plot. It follows the story of twin brother Reece and Rex who aren't looking for love, but end up finding it anyway. I appreciated that these two books were put together because even though the stories could stand alone- you are much more invested in the characters because you get to meet them twice. I gave the story 4 stars because I thought the plot in the first book was a little overly complicated- but I still enjoyed the listen. The narrator also did a great job bringing these characters to life. I'll definitely look for more books by Goss and more books narrated by the talented Persephone Rose!

A great book by Barbara Goss. I loved that it was two stories and how they were connected. One of Ms. Goss' talents are creating in depth characters. The stories were intertwined. You can never go wrong by reading and enjoying the adventures of Barbara Goss.

I got this book via audiobook boom and this is my voluntary review. This is another story of the brides of Hays. This is the stories of twin sons who get unconventional mail order brides. It is also the love story of the widowed father of the two boys. It is a nice clean western with several plot twists. There is suspense, murder, betrayal, humor, and especially love and the belief that God is in control of every situation. I love these stories and enjoyed these two as well. The narrator was good and moved the story along. The emotions and characters were well presented.

BOOK REVIEW...... Loved the story concept. The characters were great. I enjoyed it. NARRATOR REVIEW..... The narrator did a good job

This was another excellent book by the wonderful Barbara Goss! True love finds you just when the perfect person walks in to your life!!

Reese is left to take care of his twn brothers mail order bride when his brother suddenly leaves town. He intends to send her home on the next train, but his father falls ill so he hires her to take care of his father. Over time Reese falls in love with her, but he can't forgive his past and pushes her away. In the meantime he learns that his brother lied about why he left town so suddenly. The audible is full of surprises and will keep you interested from beginning to end. The narrator does a wonderful job with voices and emotions bringing characters to life. I recieved a copy of this audible free at my request and am more than happy to provide my review

Great story by Barb Goss, sweet clean romance Persephone Rose is a very talented voice artist, his ability to voice so many different characters and make them all individual is amazing