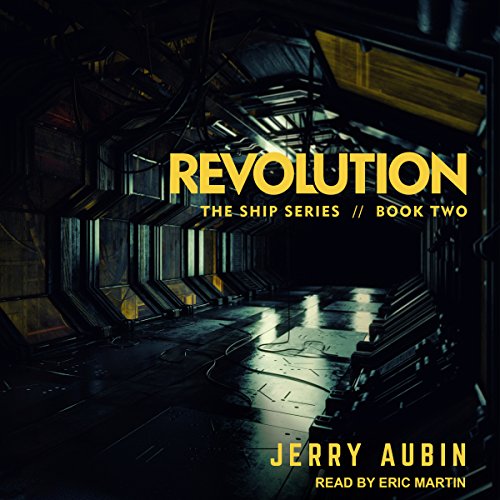 Zax should be training to pilot a fighter with his best friend, Kalare, but instead he defied the flight boss, and his career is in the toilet. His new job managing sewage in Waste Systems may be disgusting and boring, but it allows him time to become adept with his plug and study the ship's infrastructure. It also exposes Zax to civilians for the first time in his life, as he works closely with Imair and befriends eight-year-old Nolly.

A year-long period of civilian unrest, which started when Zax revealed his discovery of an unknown spacecraft from Earth, finally erupts into a full-blown revolution. He is thrust into the middle of the rebellion, alongside longtime friends and enemies, where his special talents make the difference between life and death. Zax eventually puts himself into a position where he can rocket back to the top of the leaderboard and restore his career - at a price.

What listeners say about Revolution

Average review for an average book

It's been a year since events in the last book, and Zax seems to have become more and more dense since the last one. He spends much of this book in shock, standing mouth agape unable to move or speak, as political machinations unfold around him, while he and other characters conveniently happen to be in exactly the right place at the right time, despite the ship being 150 miles long.

It's not a bad book, and I understand the necessity of suspension of belief when reading a book, but there are just too many coincidences and contrived scenarios all tumbling one after another for it to be a gripping read.

I enjoyed it from a simplistic point of view, but it's no Arthur C Clarke novel for sure. Martin's reading is energetic and draws you in - Sergeant Bailey is the best expressed character, and dare I say it, probably my favourite in the series.

I guess it was ultimately successful, because I'm following the series and will see it out to the end to find out what happens - which is what books are supposed to do.

Moving on to number 3. loved book 1 and 2, listening to both 2nd time around!