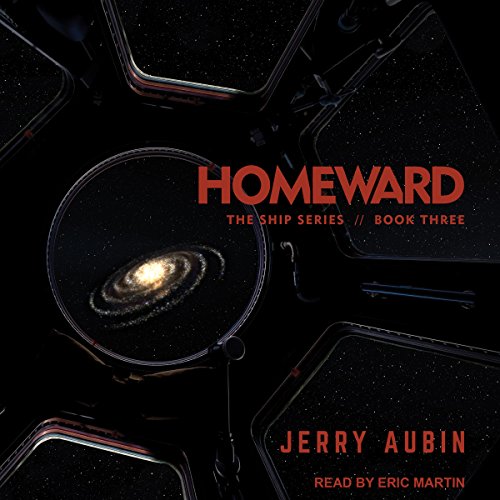 Life on the Ship has changed, and for Zax it means a return to the top.

The Pilot Academy finally beckons and Zax battles for position against a competitor who brings a fascinating advantage. Meanwhile, his friendship with Kalare remains strained as he refuses to drop his suspicions about the Flight Boss and the officer's knowledge of the mysterious humans.

As the Ship travels back towards Earth, the Crew visit a series of previously established colonies and discover startling information about their colonists. Zax eventually gains a new friend who unlocks the past, but the knowledge leads Zax to put his faith in someone who could be a powerful ally - or an even more dangerous foe.

What listeners say about Homeward

This is the my instalment so far. loving it

Was a bit cynical about listening to one narrator performing a multude of characters, but overtime, I've warmed to the idea, enjoyed how the story has unfurled so far and can honestly say,I'm positively hooked

A much better book than the previous ones.

This book is so much better than the previous ones in the series. Zax still spirals ever downwards in his IQ and ability to understand what is happening around him, but the saving grace of the book is that Aubin now describes things from multiple points of view - Shipboss, Emir, and Kalare all have sections where the story is seen from their eyes and thoughts.

There is also a flashback to the origin of the ship where designer/creator Aiden and supporting characters are introduced - which is much needed to pique interest.

Actual storytelling and plot is still formulaic, but character development is finally taking off and things are happening on a grander scale than before. You can tell that things are heading to a finale - albeit one that's in another book.

Quite looking forward to the last part, thanks to this instalment.

silent screaming or is it scheming?

the plan is working but not for Zacks .who is in deep shit and about to be chilled for the trip home

The story is heating up.

The plot thickens.
Do read/listen to the earlier books first. The narrator does a great job on several diverse voices/characters.