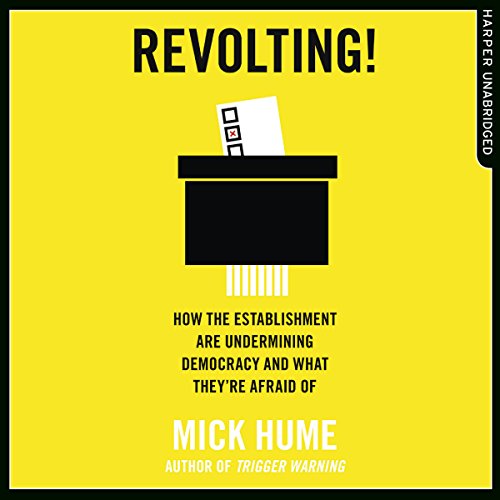 By: Mick Hume
Narrated by: Andy Cresswell
Try for £0.00

A short, sharp intervention in the crucial debate about the future of democracy, which has been brought to a head by events from Brexit to the Trump phenomenon.

In response to the emerging 'I'm a democrat, but...' consensus, this audiobook will argue for a forthright defence of democracy against its enemies and critics, old and new. As part of that argument, it will aim to show that the problem has not been too much democracy but too little - the absence of real political choices about the future that has stoked the popular mood of antipolitics.

"Superb.... This is a first-rate polemic and the most important political book of the year so far." (Rod Liddle)
"This is an important book, and couldn't be more timely. It's strong-minded, unafraid, determined to knock down all the various specious arguments against free speech, unapologetic about insisting on the value of free expression, and terrifically well argued. In these weak-minded times it's good to have so uncompromising a defence." (Salman Rushdie)
"What this book does tremendously is pull off the neat trick of summing up just what the hell is going on out there on the great frontiers of speech, offence, liberty and people shouting at each other." (The Times)

What listeners say about Revolting!

More and more people of all political persuasions are recognising how the elite with the help of controlled media and useful idiots on the left are chipping away at democracy. the election of the establishment puppet Macron in France. portrayed by the media as a rebel outsider, is the latest example of the elite controlling democracy. wake up!

Mick Hume is standing up for democracy. If you’re genuinely interested in learning about the true meaning of the word, this book is for you.

Must read for freedom lovers.

Excellent review of democracy and how we are losing it. Time for action to take it back.

A terrible book about essential topics and sentime

Who Rules the World? by Noam Chomsky. Mostly just to spite this author.

If you could play editor, what scene or scenes would you have cut from Revolting!?

I would have rejected it outright. The author is unable to construct coherent and self-consistent arguments.

The author and I share some important sentiments and views. I consider myself a Democrat (in the ideological sense, not referencing the US political party), no ifs or buts about it. But after having listened through this seven hour rant I am not sure I can say the same of the author.

He is incapable of stringing together an argument without falling into self-contradiction and hypocrisy. He dismisses out of hand any opinion that does not conform to his own, yet throws harsh criticism at pretty much everyone else who he believes does this same thing. He states that there has been historical resistance to forming an agreed-upon formal definition of "democracy", purportedly because this would threaten the authority of the 'elite', yet he himself seems to have an iron-clad definition down and considers any other definition entirely illegitimate, regardless of what arguments back it up. And on the topic of the 'elite' he likes to bang on about, he himself notes that branding the Remainers as all 'elites' is a rather broad definition given that an 'elite' of 49% can hardly be said to be particularly elitist. And then he goes on to do just that, repeatedly, throughout the book.

He also places some strange, arbitrary and frequently self-contradictory delineations on where democracy does and does not apply. In the case of the Scottish referendum on independence, he praises the democratic nature of it. But when faced with the fact that Scotland voted overwhelmingly for remain, he dismisses this on the basis that Leave won the popular vote in the UK as a whole. Nevermind that presumably this would have been the case if the Scottish independence referendum was UK-wide as well. Not only does he arbitrary delineate the demos to the population of the UK as a whole rather than its constituent nations, he reverses this view when it apparently suits his argument.

The author appears to be a believer in democracy only so far as the first principle of democracy goes: Rule of the majority. That is, indeed, the basis for it, hence the "first principle" term. But it is not the only principle of what should be considered a democratic state. Any state governed purely by the first principle will inevitably turn anti-democratic to some extent: Majority rule is an inherently fractious principle, and is likely to lead to the undermining of the rights of any stable or clearly delineated minority. Yes, this is the idea of the "tyranny of the majority", but it is NOT an argument against democracy. It is an observation of a flaw in the first principle, a flaw that explicitly undermines that same principle. He railed against the concept throughout, but never once delivered a coherent and convincing argument against this concept.

The second principle of democracy is what both enforces (grants) and reinforces (maintains) the first principle: The (human) rights of the individual shall be protected. It is from these rights that the right to democratic rule and participation stems, and thus these rights are as important as the democracy itself. This second principle is the bulwark against the tyranny of the majority. Without it, democracy loses legitimacy.

The third principle is the rule that everyone is equal before the law. It is the combination of this principle and the existence of a nation state that demands an independent judiciary, something the author repeatedly rails against in the book. If a law lacks public support, you challenge the law, you do not challenge its enforcement on a popular case-by-case basis. This isn't an argument for stability, it is again an argument for human rights.

So in conclusion, for all his rambling about the virtues of democracy (with which I agree), and the failings of the political system (with which I agree) and its corruption by the elites (with which I am equally infuriated), the author fails to even present himself as a Democrat. Regardless of any valid points (of which he makes several), salient history (to which he makes some good references), and interesting perspectives (several of which are presented), he author fails entirely in fulfilling the basic purpose of this work: To lift the concept of democracy, and demand its strengthening.

This book made me angry for all the wrong reasons.