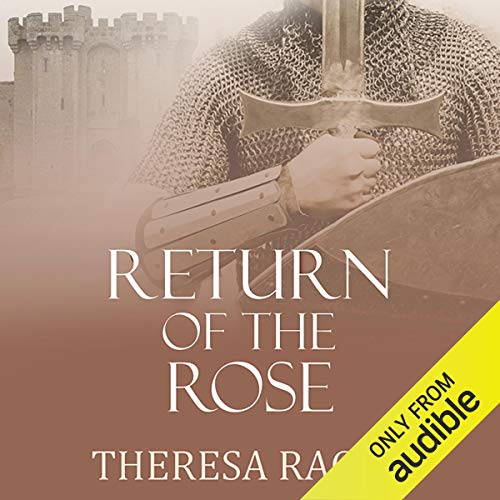 Return of the Rose

Morgan Hayes grows up in the 20th century with a mysterious attraction to a hollow suit of armor that stands in the window of her mother’s antique store. She is 24 years old when she becomes entangled within the armor’s metal plates and is whisked back in time, where she is mistaken for a twin sister she knows nothing about. Morgan is forced to marry King Henry’s favored knight, Derek Vanguard, Lord of Braddock Hall.

Abandoned by his mother and having failed as a child to gain his father’s love, Derek’s heart is as cold as the stone walls of his castle. In the end, will Morgan discover the true power of love?

"The ending was so well written it gave me chills, and I purposely read it slowly because I didn't want the story to end. I hope there's a sequel in the not too distant future." (Caroline Fyffe, award-winning author of Where the Wind Blows and Montana Dawn)

What listeners say about Return of the Rose

A FAIRYTALE STORY AND FUN

I really enjoyed this time travel romance about twins Morgana and Amanda born in Medieval Britain, Morgana was sent to the future as a sick babe to hopefully find a cure for her. Then, when she is 24, she's sent back in time and meets Lord Derek Vanguard and is mistakenly understood to be Amanda, her twin sister who is betrothed to Derek by the King but who had escaped.

It was a funny enjoyable romantic tale about Knights and castles and dreams coming true, no it wasn't 'historically acurate' but I don't think it was supposed to be, so don't look too deeply into this book - it's pure escapism and it's an easy listening fun romp through time.

I thought the narrator did a great job and didn't speak too fast for me but if you're concerned then sample her voice first..

Worth my credit? Yes, I thoroughly enjoyed it.

Refreshing, Fun and a Nice Escape

A very different kind of audio book for me, but really enjoyable . . .time travel . . . kings and jousting matches . . . the story is well written, and I quickly got very attached to the characters . . .The modern day/centuries old fairy tale was a sweet story of much human value ... children growing up yearning for the love and nurture of their parents . . . and the way it all unfolds is unexpected and wonderful.

This book is one of the best

Love this book. It's fun and worth your time and money or credit. The narrator is just great, and makes the book alive. #FairytaleTwists #Backintime #Lovestorry #FeelGood #Funny #Tagsgiving #Sweepstakes

I am so surprised at how good this book is and the narrator was exceptional. Time travel, magic, adventure, love, all the right characters in place. I loved the whole book. Believe me, you won't go wrong with this one. I have to say, Audible, give Katherine Kellgren a RAISE!! She is the best! Wonderful job. Now, stop reading this and get the book people!

I got this book because of a few rave reviews that I cannot for the life of me understand! Someone wanted to give it 10 stars??? This book was so cheesy and shallow that nearly every bit of it made me cringe. Not only that, it was such a bad knockoff of Outlander that it wasn't even trying to hide it. It was Outlander mixed with The Husband Trap and rewritten with the skill of a junior higher. In fact, I thought this was a kids book all the way up until the graphic sex scenes. If it weren't for that then I think it would be fine for girls ages 10 to 13, but the ridiculous sex ruined the only possible target audience for this unoriginal ripoff of a book.

The narrator was so obnoxious that about 10 minutes into the book I almost returned it because I couldn't stand to listen to her for one second longer. I have never hated a narrator so much! She was not even narrating the book, but rather performing it with enough zeal to knock down an elephant with one breath of her CONSTANT over-exuberance. She was so obnoxious that it actually made me angry. I cannot say enough bad things about this book. It was all just so very bad.

I would have until the last act. I feel the author's desire to prolong the couple getting together ultimately made the story suffer and I became too annoyed with the male character's refusal to see anything beyond his own bitterness. After he turned her away the last time I knew that whatever ultimate HEA ending was coming was not going to be satisfying to me anymore.

Trying not to give anything away. I wish Derek didn't have to be smacked over the head with a figurative two by four to finally believe in the woman he was supposed to love. I would have liked to see more involvement of Morgan's family. The author did a great job with the side characters, so I would have liked to see more from Morgan's side. The author put all the focus on the characters getting together. It really could have been so much more. The ' family reunion' at the end came off very forced and not at all earned.

Excited. She was enjoyable to listen to and did the voices very well, but I feel like she was overly excited a lot of the time. If 10 is the height of excitement and 1 is normal ... I don't think she ever found her 1 voice. More like she stayed between 4-10 the whole time. I think she did very well with the different voices and it made for a very comical read. I actually think her reading improved on the book. If I had straight read it, I think it would have sounded even more cheasy and cliche.

I don't think it was ever going to be that. This is a very light read that doesn't take itself too seriously. Those aren't the types of love stories I get lost in. It was fun, for the most part. Just, as I said, I wish Derek had believed in Morgan more.

This is the story of Derek Vanguard, Lord of Braddock Hall and Morgan (Morgana) Hayes. Morgan becomes entangled with a suit of armor in the antique store owned by her adopted mother. She has always loved this suit of armor and wondered who the knight was that had owned the suit originally. Little does she know that she is a woman out-of-time. She was born in Medieval England but sent to the future by a witch to save her life. She is transported back in time where she becomes entangled with the owner of said armor. She meets and falls in love with Derek who is that knight.

Derek is a good man but his heart has been hardened because he thinks he was abandoned by his mother and failed as a child to ever gain the love of his father. He is the favored knight of King Henry and the king wants him to marry. He has chosen a bride for Derek and the bride is Amanda Forrester who is the twin sister that Morgan does not know she has. She remembers some history but there are many gaps which make it hard for her to adjust to some things. She doesn't even know how to wear her clothes correctly.

She grows to care for Derek very quickly though she does not realize for some time that he is the knight who owned the armor. In the twentieth century she had learned that the owner of the armor had been ambushed on the way to recover his true love. She thinks she was sent back in time to save his life. She tries to tell him she is from the future but he does not believe her. There is a past fling for Derek that is not a good person and she of course causes problems. There are many things she does that he just accepts and does not question much. The bathing attire she and the ladies were on a outing really feels out of place here but it is short lived and passed off as a French fashion.

It is a nice love story overall and I enjoyed it very much. I found it very entertaining. As for Katherine Kellergen's performance, I would like for her to have yelled a little less and slowed the pace down a little more when I first listened to it. I listened again however and think that the pacing and volume did pretty well fit the story. I do wish that her voice for Derek had been different. He did not come across as the strong character I would like to have heard from him. It was not bad but not what I really wanted to hear. I have other things she has done and they are good.

This is a good book and worth a credit.

Not an "OUTLANDER" book

Would you try another book from Theresa Ragan and/or Katherine Kellgren?

I probably would not try the author again. The story was just so deja vu, and so stereo typed, how head strong women are today and how they were not like that ages ago. The laird being macho bad guy, yet ..... you get the picture.

Which character – as performed by Katherine Kellgren – was your favorite?

Katherine Kellgren did a good job for all characters

If it were more unpredictable and had more history and depth to it.

I would not waste a credit for this book.

Loved the Novel - where is the sequel?

If you could sum up Return of the Rose in three words, what would they be?

What other book might you compare Return of the Rose to and why?

I rarely read nonfiction and bought this book in error. What a nice surprise and journey back in time. As a teenager of 16, one of the memorable books I read was "Below the Salt" by Thomas Costain. The book introduced me to the wonder and magic of historical novels. As an Army Brat, I checked the book out from the Fort Sill, Oklahoma military library on the recommendation of a beau - and was hooked on historical novels. Thankfully the military library was well stocked with Thomas Costain books and I returned to check out and read many of Costain's novels. What an unexpected joy to get that same old feeling of my youth with Return of the Rose. I bought the kindle and audible books and enjoyed whisper sync on my new Kindle Fire. Now, my challenge is to find similar novels. I also want kindle and audible versions of Thomas Costain's books. At 64, it is time for me to re-read the books with the advantage of enlarged text and sound to enhance the pleasure.

I Got The Wrong Book But Glad I Did

I was looking for another title and thought this was it. But super glad I did. the narrator read with such enthusiasm it made the journey really good.