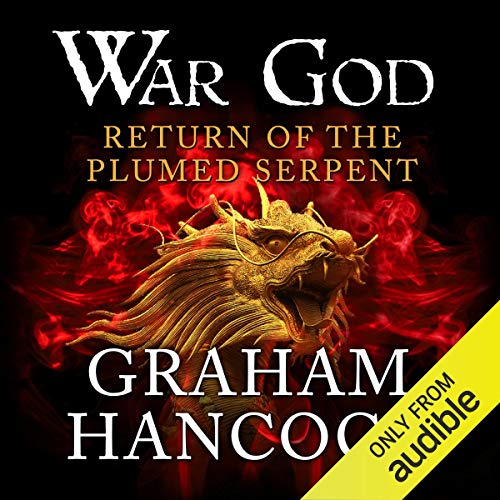 Return of the Plumed Serpent

By: Graham Hancock
Narrated by: Barnaby Edwards
Try for £0.00

Graham Hancock, an expert in ancient civilisations and author of the nine million selling Fingerprints of the Gods, and expert too, on the use of hallucinogens to achieve higher states of consciousness, brings these two interests together in the second volume of the War God trilogy.

The conquistador Hernán Cortés is dreaming of Tenochtitlan, the golden city of Aztecs. But in order to win the Aztecs' gold, Cortés and his small force of just 500 men will have to defeat the psychotic emperor Moctezuma and the armies of hundreds of thousands he commands.

Cortés expects that the Tlascalans, hereditary enemies of the Aztecs, will join him, but instead finds himself locked in a deadly struggle. As Cortés risks all against the Tlascalans, he plays mind games with Moctezuma, aiming to defeat the Aztec emperor psychologically before ever having to face him in battle.

In this he is aided by his lover Malinal, a beautiful Mayan princess. It is from Malinal that Cortés learns of the myth of Quetzalcoatl, 'The Plumed Serpent'. She shows him how to exploit the prophecy of the fabled god king's return to weaken Moctezuma's resolve and keep alive the suspicion that the conquistador might actually be Quetzalcoatl himself.

What listeners say about Return of the Plumed Serpent

Having read all 3 books in this series I am still amazed that a factual writer such as Hancock has the talent for such enjoyable epics.

It is a continuation of the first book and also a continuation of the brutality by both sides. The arrogance and greed of the conquistadors in the name of God and King is only matched by the hypocrisy of challenging human sacrifices by the wanton slaughtering of those they considered to be subhuman, despite the incredible achievements by the indigenous people. The reader will obviously conclude that the spread of Christianity should have been that of living with these people, earning their trust where possible and living by example, rather than the slaughter of many thousands. Of course, human sacrifices are horrific, but to attempt to stop this through violence, fear and oppression was only ever going to have one outcome.

Barnaby Edwards with with his repertoire of 'English accents' is superb. His talent for narration is demonstrated by the number of audiobooks he has been asked to narrate. And again, this book can interfere with your sleep and work as you feel compelled to keep listening. This is every bit as good as the first book and I can very highly recommend it.

Well written ,well performed , great characters and story. Highly recommended. If you've enjoyed any of Grahams books this trilogy is a must .

Bit slow paced in the middle & starts to feel a bit repetitive.
But once the battles begin somewhere mid way you are in the fascinating world of the Mexica & conquistadors again!!

I would recommend upping the speed to 2 or 2.5x. especially if you do multiple books in a day..

Mr. Hancock has me riveted . Onwards to the 3rd book!

Graham has such a gift for writing coupled with the talented narration from Barnaby made this just a joy.

Amazing historic details showing us that reality can be a lot more crazy than ficcion. Graham Hancock´s at its best!
I Really loved this book ... couldn´t sleep for weeks with this story pounding in my head, in my dreams.

Return of the plummed serpent

Although I thoroughly enjoyed this book I found it to be a bit repetitive. I am looking forward to the next book which concludes the story.

I think the quality of the book is deteriorating. The characters are becoming more and more steretypical. The story on itself as a historical pice is fascinating, but the details of the journey, which should have been the main contribution of the author, are not intriguing, entertaining, enlightning, or nothing of the sort. Th characters are as one dimensional as possible. Like in a cheesy Hollywood action production. And th constant reminding of the backstory of the characters and their "virtues" and so on, is really annoying, and for me personally, a sure indicator of poor writing.

The story takes you to a journey of adventure and fantasy in a grounded and well studied world by the author. You can learn quite a few things if you listen carefully and take the time to research the elements mentioned. Or you can just hop on the ride and let yourself be carried through the story well read by Barnaby.

A fantastic second installment of Graham Hancock's War God's. Looking forward to the next book in the series!

I literally have not read a better book than this. It helps that I read the preceding book in the trilogy first of course, so that I was up to speed on what was happening at point in the story where this picks up. The sense of danger and adventure, the feeling of world-changing events evolving in front of my eyes (and ears), the horror of a culture that carried out mass human sacrifice, even the horror of the Conquistadors and their feeling of entitlement as they slaughtered the "Indians" in the name of their king and their god.

Graham Hancock is known for his tireless research in the area of nonfiction, now he proves his skill in the areas of story writing and character development. When these elements all combined, I felt as I was living this grand adventure alongside real people and wondering how anybody lived through it. The world would not be the same without the events that are so eloquently portrayed in War God, and the world of literature would not be the same without Graham Hancock. Bravo Graham!

And, what a cliffhanger at the end! I can't wait for the finale! I couldn't believe the book was over so soon- it just flew by! That feeling of: "Oh no. It's over." When the third installment comes out in Audible form, I'm sure I'll listen to the first two again as preparation. Something to look forward to, for sure! I'll be watching for it!

I enjoyed the story, and the narration was amazing. top notch in my opinion

A Must Read Trilogy!

Absolute loved it!
Incredible second book to a fantastic trilogy!
Can't wait for the Third book!

I wept when the young lad defeated his bully. I sweated through each battle. Graham and Barnaby are masterful Duo.

A Great Listen! Gripping, hard to turn off.

It's Unbelievable, amazing, cruel, & funny! Graham Hancock is the best!! I can't believe this actually happened 500 years ago

what a wonderfully written and preformed book.

can't recommend this series more. two down 1 to go.

It was a little slow, but still good

There were a few chapters that were really repetitive and there was a lot of talking without any point, but things eventually came together.

Another masterwork from Graham Hancock. Stupendously written, beautifully narrated, worth listening to over and over again!

Read the book instead

I remember reading and really liking the first book. But this second one was a chore to finish. First, although I really like the voice of the narrator, he makes all the characters even the Indians (natives) sound British which had me rolling my eyes the entire time. Second, the writer makes the natives speak as if they grew up in Europe using European military terms. And lastly it read more like a history book than a fictional novel unlike the first.

Love this series, and author. Aside from a few pronunciation moments from the narrator, which I think are just my little quarks, he puts you I to the story and becomes the characters. Always recomend Graham Hancock.