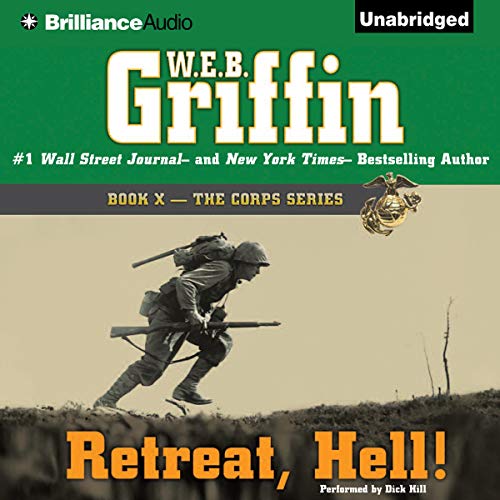 It is the fall of 1950. The Marines have made a pivotal breakthrough at Inchon, but a roller coaster awaits them. The bit in his teeth, Douglas MacArthur is intent on surging across the 38th parallel toward the Yalu River, where he is certain no Chinese are waiting for him, while Major Ken McCoy, operating undercover, hears a different story entirely, and is just as intent on nailing down the truth before it is too late. Meanwhile, Brigadier General Fleming Pickering, shuttling between two continents, works desperately to mediate the escalating battle between MacArthur and President Harry Truman, while trying to keep his mind from the cold fact that somewhere out there, his own daredevil pilot son, Pick, is lost behind enemy lines - and may be lost forever.

Before Retreat, Hell! is finished, all their fates will be determined - and for some of them, it will be a bitter pill indeed.

Retreat includes characters introduced in 2 previous Marine corp books by griffin. We experience the start of the Korean war, with all the intrigue and politics of the day served up with humor, sex and Marine dialog that keeps you listening. I could listen to Dick Hill read the phone Book. He is terrific.

I love this series and after reading the entire series again for numerous times, I am once again left wanting more to find out more of the story of the main characters. This last book is very good and ends as McArthur is about to be dismissed by Truman. But the real story in the book is What happens to Pick and McCoy and the others? I would love a book to take us through peacetime and the Cold War into Vietnam. Please follow up with at least 1 more Corp Book!!!!

LOVED THIS SERIES!!! Wish it wouldn't have ended.

This series was absolutely phenominal! I couldn't stop listening to it. Wish it wouldn't end...

The Corps Series is superb! I didn’t want to put it down (figuratively, actually I didn’t want to remove the earphones). The next book in the Corps series was being purchased before the one prior ended and I even had to go to the library & actually read the 2 books that were missing from audible (I got absolutely nothing done for 4 days while I was consumed in the pages).

This series inserts several fictional characters in the middle of historical events & people. My dad & his brother participated in the Pacific during WWII and it was fun to hear some of the quotes & sayings/proverbs dad has made throughout the years in this series along with the background as to why that saying or quote originated.

I really wanted to strangle MacArthur’s Bataan at several points in the book for withholding information from MacArthur. President Truman really had his hands full but at least knew enough to find knowledgeable people to tell it like it really was and not what they thought he wanted to hear.

I thoroughly enjoyed the character of Ken McCoy who while only being a Major had those of higher rank following his directions in short order. A sign that gave me hope that the idiots of this world will not rule in the end.

This had the feel of the last book in the series and if so, WOW what an end to the tale.

What was one of the most memorable moments of Retreat, Hell!?

When Pick found the Army.

What does Dick Hill bring to the story that you wouldn’t experience if you just read the book?

Yes. It continued the saga of the main proponents of the series, bringing their stories to a satisfying conclusion.

I enjoyed the continued development of the characters.

His pace was excellent and his intonations and voices added to the story and listening pleasure.

Who was the most memorable character of Retreat, Hell! and why?

McCoy and Pick were the most memorable characters, as I believe was the author's intention.

having enjoyed reading the books shortly after they were published, I looked forward to listening to them. I can fully recommend them to you.

The whole series is amazing to read. I finished reading the series well over a decade ago and, at the time, I was sorry to see it end. Over the last month or so, I was able to enjoy them all over again. Thumbs up to Dick Hill for his performance.
This series is a must read and a must listen.
Semper Fi!!!! Cpl Gabe Martinez, USMC 1988-93. Once a Marine...

Dicks Hill is a great performer. I'm amazed at how much trouble he goes to in making this real . Loved it!

a great series till you started jacking with the dramatization crap. Stick with original style.