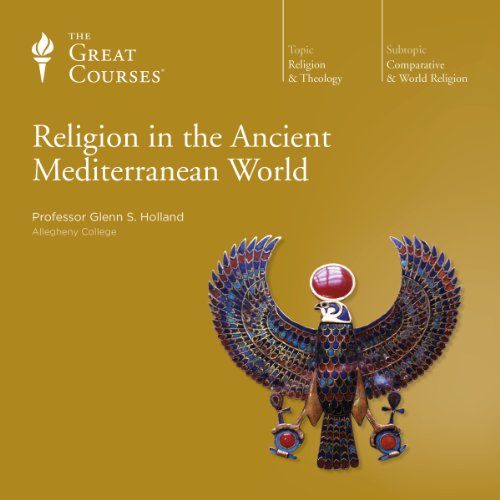 Religion in the Ancient Mediterranean World

Step back to a time when the mysteries of the universe could seem overwhelming. Cycles of nature kept predictable time with the sun, the moon, and the stars, yet crops failed, disease struck, storms ravaged, and empires fell without warning. In the region surrounding the Mediterranean Sea, people responded to such tumult with a rich variety of religious beliefs.

From these beliefs, we get some of Western civilization's most powerful texts: the Mesopotamian Epic of Gilgamesh, the Hebrew Bible, the Greek epics of Homer, Ovid's Metamorphoses, and the New Testament, among many others. Composed largely of stories of human interaction with the divine, these narratives gave ordinary people a window into the unfathomable realm of the sacred.

Archaeological remains show that ancient peoples also responded with a complex array of religious rituals, and their temples, cultic statues, funerary goods, and household devotional items are among the world's greatest cultural treasures.

Using such textual and archaeological evidence, these 48 marvelous lectures explore the religious cultures of the ancient Mediterranean world, from the earliest indications of human religious practices during prehistoric times to the conversion of the Roman Empire to Christianity in the 4th century of the Common Era.

You'll discover the religious traditions of a wide range of civilizations, including the ancient kingdom of Egypt; ancient Mesopotamia; ancient Syria-Palestine, including Israel and Judah; Minoan civilization on the island of Crete and the successive civilizations of the Greek mainland; and the city of Rome, whose empire dominated the entire Mediterranean world at the end of the ancient era.

What listeners say about Religion in the Ancient Mediterranean World

Interesting introduction to the topics of ancient Egyptian, Mesapotamian, Jewish, Greek, Roman and Christian religion. I liked that the lecturer emphasised some of the similarities between them, and seemed to take a fairly objective stance. He does come across as a little dry in delivery, but I eventually got used to it. This is anyway mostly made up for by his clear and logical style and structure. I found it to be an enjoyable and educational listen!

Contextualised overview on religion and philosophy

If you could sum up Religion in the Ancient Mediterranean World in three words, what would they be?

What other book might you compare Religion in the Ancient Mediterranean World to, and why?

No idea, this was the first book I listened to in this genre.

Placing religions in the ocntext of civilisations made the book very interetsing, ot me to understand things I had not really picked up on during my primary and secondary studies. The distinction between philosophy, religion and to some extent magic is also eligtening.

No, just made for interesting reading.

Hebrew religion could be looked into more shematically, but I suppose it is compòlicated and beyond the objective of this particular book; also, I would have been keen to find out osmething more about the Persian Empire's religion(s).

Some good moments, but ultimately disappointing.

This course makes some attempt to give a comparative perspective on several of the religions of the ancient Mediterranean. The religions covered are mentioned in the publisher's summary, and if you know very little about the religions covered, you will no doubt learn something about each, as I did. However, some major mediterranean religions are left out, most notably Phoenician/Carthaginian religion; also absent is any treatment of Celtic or Iberian peoples' beliefs. Only the briefest mention of the Etruscans as well.

This is especially grievous in light of the large amount of time spent on Judaism and Christianity; these are no doubt Ancient Mediterranean religions, and thus worthy of some coverage, but they -- Christianity especially -- are covered in more detail than for instance the beliefs of classical Greece; this is unfortunate given that Christianity and Judaism are covered in-depth by so many other Great courses lectures, and are bound to be more familiar to most listeners besides.

There is also very little time devoted to the rituals and actual practice involved in each religion, and too much spent on discussing stories told in the context of ancient religion that are not actually religious documents, such as the various ancient epics. As much as I love the Epic of Gilgamesh, this doesn't seem like the place for a close reading of it; more information about each of the ancient Mesopotamian gods would have filled that time better.

However, if you know very little about ancient Mediterranean, this wouldn't be a bad place to start. And if you are primarily interested Christianity, this course would be a great place to learn about the context that gave rise to it. I definitely learned many things from this course, but I can't help feeling that I could have learned a lot more.

In general I would have to say yes.

I have read/listened to several Great Courses lectures in the past, while this was certainly not the best, I have been very pleased in the past.

The tempo was normally fine, although Dr. Holland did overly repeat himself at times, which caused the tempo to lag.

Was Religion in the Ancient Mediterranean World worth the listening time?

Yes. But it is not the most academically credible examination of the subject matter currently available.

This is not a lecture series in comparative religious studies. Whether or not it was Dr. Holland's intent, much of his treatment of ancient Hebrew and early Christian religious practices have more in common with Christian apologetics than a thoroughly credible examination of the known and demonstrable traditions/dogma of these rather well-known religions. This pro-Christian bias, while general subtle, is pervasive in the relevant chapters in which they are discussed. There was little to know examination of Hittite or Syro-Hittite states whose own religious practices are a continuing source of inquiry for modern historians. If I was to reconfigure the course's content, I would leave out a significant portion (say half) of the discussion on ancient Judaism and early Christianity and replace it with Hittite, Syro-Hittite, Canaanite (Phoenician) as well as the religion of the Carthaginians- which arose from largely from the earlier Canaanite tradition. Holland's treatment/analysis of other religious traditions is much more academically credible and sticking with the same degree of detachment throughout the entire course would have served him well. To be fair, this course is not without some redeeming qualities and many may find it useful, but don't expect to be awed by Holland or his analysis of the topic.

A very well done and expansive great course, and particularly interesting topic. I've read many books and articles on ancient mythology, Ancient Mediterranean religions and ways of life but this course really filled in some holes. The professor brought up interesting nuances that connect the religious practices of the ancient Mediterranean as a once living, thriving place and society and really brought out the cultural exchange that gives a realistic glimpse into this past world. There is plenty more to discussed on this subject but I definitely learned a great deal and stayed engaged throughout the entire course. I waited a long time to purchase this course because I thought it might rehash a lot of stuff I knew, but it didn't.

The Great Courses on Tape is a wonderful way to learn, but this isn't one I'd recommend for just anyone.

Holland is a good teacher, but unfortunately, not an engaging one. If you don't care much about the topic specifically, you're going to be bogged down. He has a tendency to repeat things that he's just said, which is useful if you have students taking notes, but not particularly helpful in something which will be listened to by someone who can just rewind if they missed something.

Now don't get me wrong. He isn't a bad teacher. Yes, his voice is a bit monotonous, and he repeats himself, but he knows this subject. He knows what we need to know. He doesn't waste time. One of my favorite lecturers in Great Courses, for example, is John McWhorter, but he has a tendency to go off on tangents. One lecture, for example, featured a nearly minute-long discussion of how he thought it would be funny to push a dog off the Titanic. McWhorter's great, but if you want to take this seriously, stuff like that can get you thinking "Well, get to he point."

For me, I was in that exact opposite position. I like diversions and tangents enough, provided you get back eventually and have something a little funny or interesting to say. But repetition and excessive focus on something bothers me, and I find myself saying "Yes, yes, you can move on..."

Ultimately, this is one that should be listened to only if you intend to take your education seriously. It isn't light, driving-to-work listening.

great, except the truly awful pronunciation of proper nouns that pervades the whole thing. "Ba'al" pronounced like "Bale" and "Plebeians" pronounced "Publians".. sometimes it's so mangled you can't actually tell what he's talking about

An unvarying tendentious spoken presentation that kills what is an inherently interesting topic. A very good example of a very boring technique. Yuck.

Listened to it twice

One of my favorite lectures in the Great Courses series. There's so much material in these lectures! Get ready to bookmark!

This lecture provides a brief yet detailed overview of religion in the ancient Mediterranean region. Professor Holland is easy to listen to and clearly an authority in his field. In addition to an overview, this lecture provides interesting comparisons between these important religions, which to me brought it to five stars.

I have been trying to gain a thorough knowledge of history ancient to present, and while there are many books that will teach you of great civilizations and great men in history, there is typically scant information on the religions of the time. I appreciate all of the Information gathered in this Course by Professor Holland and would easily recommend this to all lovers of history and religion. It's always a joy to gain a greater understanding of how what we believe can shape the way we live and view life.