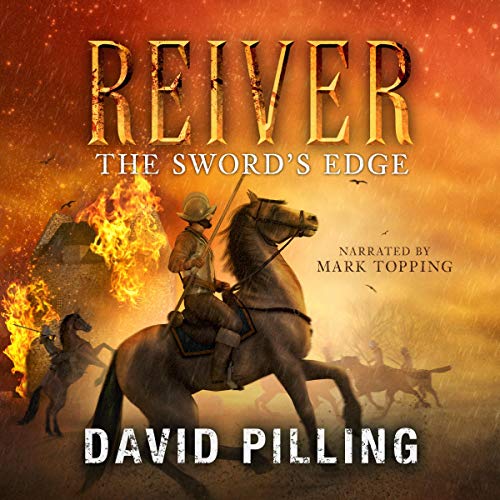 By: David Pilling
Narrated by: Mark Topping
Try for £0.00

1570 AD. The March lands between England and Scotland are a place of terror, where outlaw bands and broken men rob, pillage and murder in open defiance of the law. Here, deadly blood-feud is a way of life. Families of robbers, known as Border Reivers, live via blackmail and terrorism. No man sleeps safe in his bed, and the sound of hoofbeats on the tops is a herald of death.

Richie Reade, otherwise known as Richie o’the Bow, is on the run in Scotland from his own countrymen and that most fearsome of reiver families, the Armstrongs of Liddesdale. When war erupts along the March, and Elizabeth of England sends her armies into Scotland to destroy her Catholic enemies, Richie finds himself drawn into the conflict. Captured in a skirmish, he is forced to work as a double agent, carrying secret messages to and from the treacherous Earl of Westmoreland.

Meanwhile the Armstrongs have declared blood-feud on Richie, in revenge for his slaying of their chief, Nebless Will. The dead man’s cruel and capable son, known as "Red" Rowy, gathers a band of outlaws and broken men to hunt down their foe. As Richie fights for his life in Scotland, Rowy plots to lure him back to the Border and a bloody fate at Armstrong hands....

Reiver: The Sword’s Edge is the second novella in the Border Reiver series by David Pilling, author of the Caesar’s Sword trilogy, the Leader of Battles series, The White Hawk series, Soldier of Fortune, and many more tales.

What listeners say about Reiver: The Sword's Edge

The story and the descriptive skills of David Pilling make this a gripping and informative historical drama. However, the mispronunciation of a number of place names will grate on people familiar with Scotland and Border counties of England in the Audio Book is extremely distracting, but if you can overcome that the narrative will make up for it.
Personally speaking, I think the first book was slightly better for having a female character with a central role in the storyline whereas this story was more battle based.