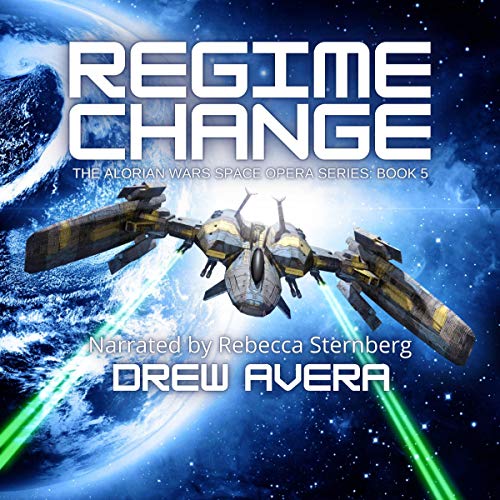 A rebellion has formed, but danger lurks before the revolution can begin.

From the author of the Alorian Wars comes the fifth book in the best-selling space opera series set in a galaxy overrun by a tyrannical empire.

Pila was once a great society in the outer reaches of the Alorian Galaxy. But as the war drew near, their security waned. Unlikely events preserved the lives of the refugees of Pila after its destruction, but saving their lives resulted in the loss of their freedom. As those against Greshian rule form a resistance movement on the last inhabitable station in the Pilatian sector, the daughter of the Emperor has other plans that will shape the future of the galaxy.

Will her rule be final, or will the first spark of revolution bring the remnant of Pila to its knees?

Regime Change is the fifth book in The Alorian Wars, a military science fiction series for fans of The Expanse, Star Wars, and Firefly. If you want a fast-paced space opera adventure, then look no further. The Alorian Wars is here!

What listeners say about Regime Change

Listening to Regime Change was a very entertaining experience. The story line moves along at a good pace with a good amount of action interspersed between character interactions that provide depth to the story. Throughout the story I could have sworn I was witnessing officer-enlisted interactions from my days in the Navy. Drew creates excellent scenarios where these type interactions occur and then makes them as realistic as I ever experienced. Rebecca Sternberg’s narration brought the story and characters to life, her pacing and deliver was excellent.

Regime Change is an outstanding book by Drew Avera. Rebecca Sternberg has given an exciting performance of the story. I was swept into a different universe with battles and characters that interact with each other and the story in an excellent way. I enjoyed the audio book. I received a code for free in exchange for my honest voluntary review.