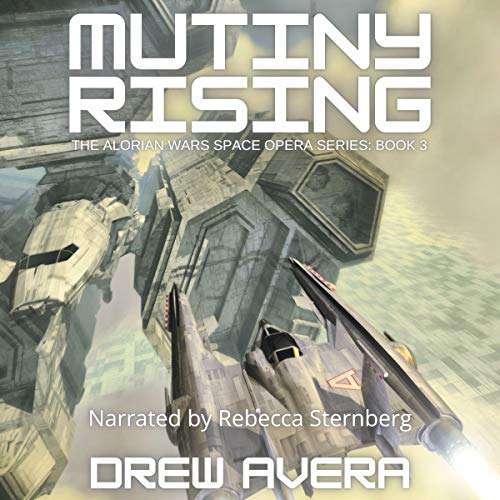 Nothing has stopped the Greshian Empire's expanse, but all hope isn't lost....

The illusion of peace shrouds a hidden darkness. Just as the crew of the Replicade are getting settled on a seemingly tranquil world, they encounter a young girl with special abilities - and she’s being hunted by a secret, powerful organization that will stop at nothing to have her.

When Anki and Brendle intervene to help the girl, they are caught in the organization’s crosshairs. The crew must make a decision: give into the looming threat of the organization or die fighting to protect her.

Meanwhile, Lieutenant Commander Ilium Gyl has taken command of a Greshian scout ship. A breach in protocol raises questions of his loyalty to the Greshian Empire, leading to a power struggle as a rebellion sparks in a distant sector of the Alorian Galaxy. His ambitions may cripple the Greshian Fleet, or he might just be the empire’s savior.

Mutiny Rising is the third audiobook in the Alorian Wars. This space opera series, filled with political intrigue and shrouded in mystery, is sure to please fans of The Expanse, Dark Matter, Firefly, and Killjoys. Join the war today!

What listeners say about Mutiny Rising