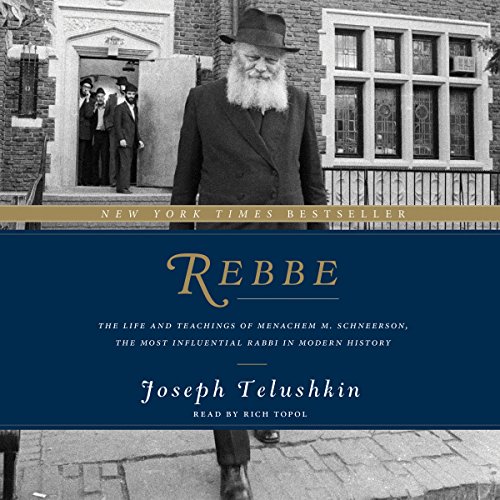 By: Joseph Telushkin
Narrated by: Rich Topol
Try for £0.00

In this enlightening biography, Joseph Telushkin offers a captivating portrait of the late Rabbi Menachem Mendel Schneerson, a towering figure who saw beyond conventional boundaries to turn his movement, Chabad-Lubavitch, into one of the most dynamic and widespread organizations ever seen in the Jewish world. At once an incisive work of history and a compendium of Rabbi Schneerson's teachings, Rebbe is the definitive guide to understanding one of the most vital, intriguing figures of the last centuries.

From his modest headquarters in Crown Heights, Brooklyn, the Rebbe advised some of the world's greatest leaders and shaped matters of state and society. Statesmen and artists as diverse as Ronald Reagan, Robert F. Kennedy, Yitzchak Rabin, Menachem Begin, Elie Wiesel, and Bob Dylan span the spectrum of those who sought his counsel. The Rebbe was the only rabbi ever to receive the Congressional Gold Medal and to have an American national day, Education and Sharing Day, proclaimed in his honor. No one has succeeded him in his position. Nevertheless, 20 years after his death, his movement has doubled in size, spreading to more than 80 countries, and his impact resonates still. But what was the secret of the Rebbe's success and influence? What principles of leadership guided him? And how did he rally such extraordinary devotion and resolve?

Rebbe explores Schneerson's overarching philosophies against the backdrop of treacherous history, revealing his clandestine operations to rescue and sustain Jews in the Soviet Union and his critical role in the expansion of the food stamp program throughout the United States. More broadly it examines how he became in effect an ambassador for Jews globally and how he came to be viewed by many as not only a spiritual archetype but a savior.

What listeners say about Rebbe

The book discusses the life of M.M Schneerson, a 20th-century leader that rebuilt Judaism after the holocaust. It illustrates the difference an individual can make when he dedicates his life to a powerful cause. The Rebbe as he is referred to had a level of discipline and devotion equal to none. Fascinating read and insight into a fairly concealed world.

If you could sum up Rebbe in three words, what would they be?

I am not a Chassid, and I am too young to have been alive when the Rebbe was. But I feel like I knew him. Hearing about the Rebbe and his outlook makes me want to be a better Jew and person.

There was an anecdote in practically every chapter that made me feel overwhelming happiness at the deeds of the Rebbe.

This narrator was phenomenal. He spoke beautifully, and I would gladly listen to him tell me stories in the future. I was never bored. True, this is mostly due to the author's expert way of telling stories of the Rebbe's life — he assumes you know nothing, which means everything is explained clearly — but it also has to do with the inflections and the subtle voices/emotion used. Easily the best biographical work I've listened to.

First, I praise Rich Topol whose brilliant reading captured the tone of the book and whose pronunciation of Hebrew and Yiddish words was excellent.

As to the book itself, once again Rabbi Joseph Telushkin has written a highly informative and inspiring volume. One must recognize that this is not an analysis of the Rebbe or the kind of biography that plumbs the psychological or historical reasons that made him what he was. Instead it focuses on the lessons one can glean from the Rebbe's actions and values. These are not only informative, they are inspiring and will likely influence readers to adopt these lessons and improve their lives and characters.

If something is significant, do not delay. Argue against ideas, not against people. Be concerned about your own group but not to the exclusion of concern for all. Focus on education. Even a single good deed or worthy action is worthwhile as it can lead to more good deeds. These are some of the Rebbe's lessons demonstrated by his actions.

Five stars across the board and highly recommended.

Great way to learn about what the Rebbe stood for

As an observant Modern Orthodox Jew I of course knew of the Lubavitcher Rebbe but had only a vague idea of what made him so unique. The book is filled with well documented conversations and events involving not only his Chassidim but Jews of all streams and many non-Jews as well. I came away with a much deeper understanding of not only the Rebbe's great gifts and contributions but of what he stood for and how the Lubavitcher movement blossomed under his direction. A great listen for almost anybody

Great Biography on the Rebbe

Outstanding biography on the Rebbe. It really tells his story and inspires you to also be a better person.

JUST FANTASTIC. Loved every minute. Many life lessons in the book. So well written and the gr8 narration made it even more interesting and worthy.
Thank you Joseph for writing this biography.

Monotone voice. Great book. Unbelievable stories. All Jews should hear the story of the most effective Jew since Moses

Each chapter was more engaging than the next and helped me to understand yet another awe inspiring facet of the Rebbe.

Knew about the Chabad Rabbi, but didn't understand how much he did for Judaism. He truly is a holy man. Thank goodness he went beyond lines and valued all Jews.

The author tells a story of a fascinating life in a way that makes you feel as if you personally knew the Rebbe. Packed with well-researched facts and references the book is never dull. Even the timeline at the end is interesting to listen to. I thoroughly enjoyed it and recommend it to those who wish to learn more about thChabad the Lubavitcher Rebbe

I was excited to listen to this but found it tedious. Effectively just a collection of stories about the Rebbe. Nothing critical. Nothing analytical