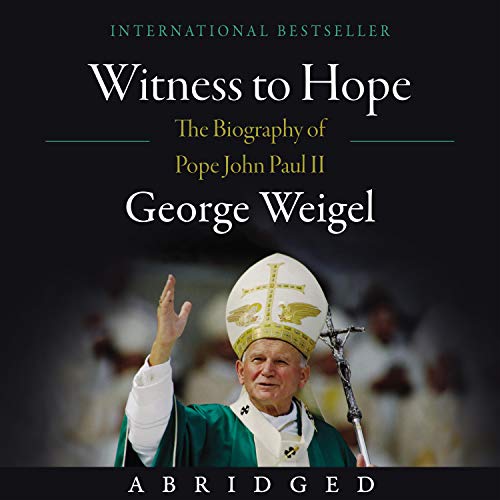 By: George Weigel
Narrated by: Sam Tsoutsouvas
Try for £0.00

Now, with an updated preface, the latest edition of the definitive biography of Pope John Paul II that explores how influential he was on the world stage and in some of the most historic events of the 20th century that can still be felt today.

"Fascinating...sheds light on the history of the 20th century for everyone." (New York Times Book Review)

Witness to Hope is the authoritative biography of one of the singular figures - some might argue the singular figure - of our time. With unprecedented cooperation from John Paul II and the people who knew and worked with him throughout his life, George Weigel offers a groundbreaking portrait of the Pope as a man, a thinker, and a leader whose religious convictions defined a new approach to world politics - and changed the course of history. As even his critics concede, John Paul II occupied a unique place on the world stage and put down intellectual markers that no one could ignore or avoid as humanity entered a new millennium fraught with possibility and danger.

The Pope was a man of prodigious energy who played a crucial, yet insufficiently explored, role in some of the most momentous events of our time, including the collapse of European communism, the quest for peace in the Middle East, and the democratic transformation of Latin America. With an updated preface, this edition of Witness to Hope explains how this "man from a far country" did all of that, and much more - and what both his accomplishments and the unfinished business of his pontificate mean for the future of the Church and the world.

"The book is rich in new detail....The book is well written and Weigel's command of the material is impressive." ( Publishers Weekly)
"A book that will become a standard for students of church history and that sheds light on the history of the 20th century for everyone." ( The New York Times Book Review)
"A tremendous achievement." ( Washington Post)
"Well-wrought and comprehensive." ( Wall Street Journal)

What listeners say about Witness to Hope

Wonderfully read and written the story of John Paul II fills me with joy and this audible presentation presents it clearly and wonderfully. Saint John Paul II pray for us.

This is the best book on the greatest man of our time. I give it four stars only because it is abridged. Also it ends around 1998/1999, when it was originally published. I'd love to see an update with the rest of the story, and in an unabridged audio format.

This is an incredible story; the story of a man who challenged adversity at every turn and rose to the occasion. I'm proud of this leader and his contributions to the beginning of this new millenium. I wish I could get the unabridged edition.

If you want to learn more about Pope John Paul II

What did you love best about Witness to Hope?

This book gave me insight into the Pope that I did not have before. I really enjoyed learning more about him as a person!

There was a description of how generous the pope was in Poland, giving away his razor if he was given one. This demonstrates the beauty of his life, but also the detail that Weigel goes into.

Well written, fascinating and inspirational biography on an outstanding man. St. Pope John Paul the Great, pray for us and our country!

Deep insights into a Pope I already respected.

My favorite is when John Paul II is elected, a moment that changed our world forever. Great narrator great book.

Took me a while but worth it

Gosh I loved this audio book. It was so good. It does not include the Popes death and anything after. But the story is amazing. Highly recommend.

A beautiful account of the life of the greatest man of the 20th century! A must read (or listen!) for anyone who cares about the history of the last century and the direction of the future, not only of the Catholic Church, but of the world.

I was truly bowled over by the enormous amount of background information that Witness to Hope gives us about Pope John Paul’s life. The author is most successful in giving us a deeper insight into what makes Pope John Paul special to his own country & people, but in a special way to the whole world!
I could not stop wondering about how well God chooses the prophets which the world needs to meet our particular needs.

A beautiful reading of a beautiful book. Very powerful and inspiring. if you enjoy religious or inspiring books give this one a try.