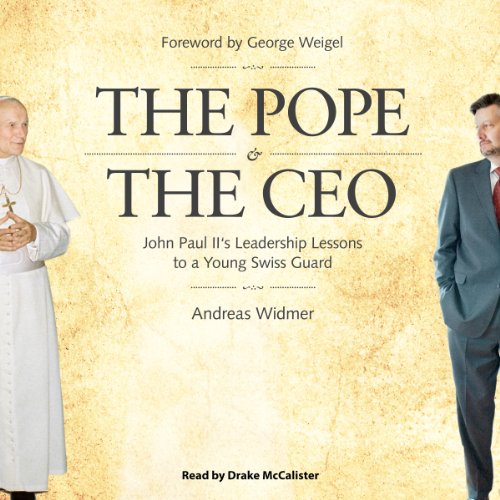 The Pope & The CEO

"John Paul II showed me what real leadership looks like. He modeled for me how to pursue our God-given potential. Not coincidentally, this also makes us and those around us better employees, more capable of and more willing to work hard at building a stronger company. That's something that makes both good human sense and good business sense." (Andreas Widmer Former Swiss Guard, CEO and business leader)

Andreas Widmer gives a behind-the-scenes look into Pope John Paul II, the most authentically human person he's ever met, and reveals how those memories shaped and forged his success as a corporate executive. In what papal biographer George Weigel calls a powerful example of leadership at work, Widmer recounts his personal experiences serving Blessed Pope John Paul II in the Swiss Guard, and the secrets of successful leadership that he learned at the feet of the great pope.

What listeners say about The Pope & The CEO

I have always wondered how Pope John Paul II was able to focus and balance his life. This book really addresses these questions and gives me more hope for my own life, spending it wisely. Thank you to the author for being an attentive guard and sharing the lessons.

I loved this book. It is exactly what I needed for my new business. I will definitely be encouraging the people in my team to read it.
I will be listening to this book more than once.

For ethical individuals living in the real world.

I really didn't know much about St. Pope John Paul II and am so glad that I listened to this book. It is such an easy to understand message and is definitely not just for CEOs or entrepreneurs. It is for everyone. There is nothing that I didn't like. Enjoy and be inspired to live a life closer to God in a very simple way.

What did you love best about The Pope & The CEO?

The narration and history was very interesting.

I really enjoyed listening to this books and the points the author made about looking to the Pope and living a faith directed life in the business world.