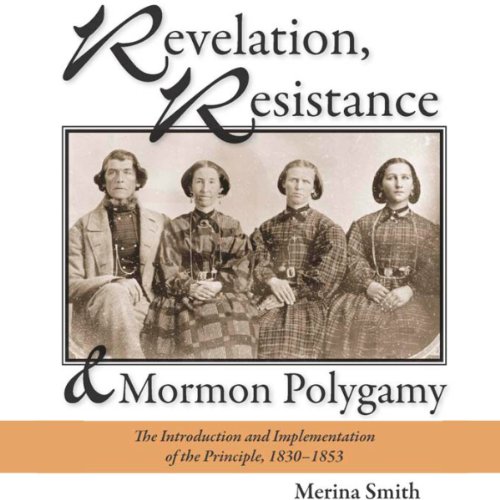 In Revelation, Resistance, and Mormon Polygamy, historian Merina Smith explores the introduction of polygamy in Nauvoo, a development that unfolded amid scandal and resistance. Smith considers the ideological, historical, and even psychological elements of the process and captures the emotional and cultural detail of this exciting and volatile period in Mormon history. She illuminates the mystery of early adherents' acceptance of such a radical form of marriage in light of their dedication to the accepted monogamous marriage patterns of their day.

When Joseph Smith began to reveal and teach the doctrine of plural marriage in 1841, even stalwart members like Brigham Young were shocked and confused. In this thoughtful study, Smith argues that the secret introduction of plural marriage among the leadership coincided with an evolving public theology that provided a contextualizing religious narrative that persuaded believers to accept the principle.

This fresh interpretation draws on diaries, letters, newspapers, and other primary sources and is especially effective in its use of family narratives. It will be of great interest not only to scholars and the general public interested in Mormon history but in American history, religion, gender and sexuality, and the history of marriage and families.

“Others, including myself, have never adequately explained the emergence of polygamy ideologically. Smith does so brilliantly, meticulously tracing the factors that overcame resistance to the doctrine among the LDS faithful. She made it possible for me to understand my own ancestors' rationale in adopting a way of life that so offended their Victorian sensibilities.” (Janet Bennion, author of Polygamy in Primetime)

What listeners say about Revelation, Resistance, and Mormon Polygamy

Best Mormon read of the year.

Would you listen to Revelation, Resistance, and Mormon Polygamy again? Why?

What other book might you compare Revelation, Resistance, and Mormon Polygamy to and why?

A good recording stays out of the way of a good listen.

Staggering that this is the beginning of my religion.

This is a great story never told, at least in audio. All Mormons need to read this and see what really happened in Nauvoo and the later effects of that period into Utah. This book was so interesting in creating a narrative to the origin and the playing out of events in the story of polygamy.

I knew nothing now I know something

Worth the listen if you want to get a history of Mormons and the ways they dealt with their polygamy.

Enlightening read for Mormons and non-Mormons

It wouldn't be my first pick. Certain friends, maybe.

It's not a story. Who knows how much is the truth?

Have you listened to any of Lisa Baney’s other performances before? How does this one compare?

The Mormon history is one giant story, based mostly on lies. I'm not saying this in a mean spirited way- just my opinion. Most everything that has to do with any religion is based on lies as far as I'm concerned.

Biased against the Mormon church

When she quoted a historical person from the Mormon church it sounded like she was negatively portraying their tone and inflection.

I found this book to be an informative sociological study, but discussing a religious topic without reference to faith is a little like discussing the swimming without acknowledging that water is a main component. The Narrator was also almost mocking in her tone which was annoying!

I struggled with this one. If you are sensitive to the same word, being repeated AD NAUSEM.....pass on this book. It's used about 708 times.

Had high hopes but it was a bust.