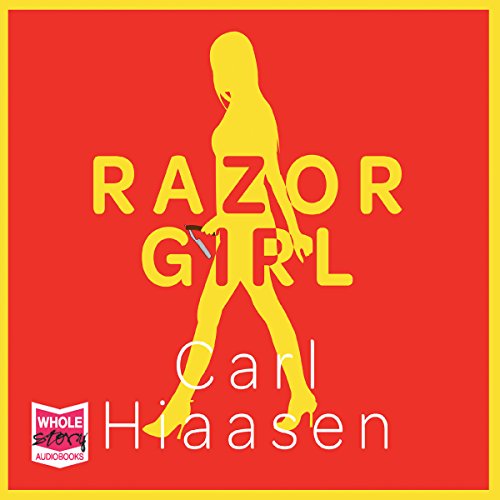 By: Carl Hiaasen
Narrated by: Jeff Harding
Try for £0.00

Reality TV star Buck Nance incites a riot in a bar and vanishes in the melee. His agent, Lane Coolman, has been accidentally taken hostage by two petty criminals who now think they can turn a quick profit by ransoming an LA talent agent.

The mystery of Buck’s disappearance draws in a range of characters from across the island, including a redheaded con artist named Merry who, using a razor blade and a high-speed car, has developed a signature way of luring in her victims.

What listeners say about Razor Girl

I used to read all of Carl Hiaasen’s novels in the 1980s. For some reason I stopped reading them in the late 1990s, an occasional foray aside, despite always having always enjoyed his work. When 'Razor Girl' came up as an Audible deal of the day I was “in like Flynn”.

All the familiar ingredients were present and correct: a rich vein of dark humour, hapless and egotistical men, clever women, and some cynical comments on the local politics of Florida. All held together by the travails of the loveable Andrew Yancy who is variously trying to stop a neighbour building on land adjacent to his house, convincing his estranged love to come home, dealing with Merry Mansfield - a female con artist, trying to get his old job back (as a Monroe County Sheriff's detective), and plenty more besides.

The richly inventive plot delivers plenty of action, humour, local politics, observations on modern America and celebrity culture, and life in Key West, Florida. It was all supremely enjoyable.

I’m now keen to read those books I’ve missed out on since losing touch with Carl Hiaasen about 15-20 years ago.

The best and most entertaining Hiaasen book since his last book

Like all of Hiaasen’s books there is a tremendous sense of sadness when you get to the last couple of chapters and realise the roller coaster ride is soon going to be over.
Good story coupled with interesting plot lines and twists. Plus in this story some bitting satire on the whole ludicrous fake reality TV shows.
Good vocal performance by the narrator completes a very satisfying audio book.

One of his very best

The usual Hiaasen mix but notable for an even more satisfactorily convoluted plot than usual and a wonderful new character in the Razor Girl of the title. Add in brilliant narration and I'd suggest you really can't go wrong with this one.

A rambling story that was difficult to follow. The narrator is good though - his voices and accents were excellent.

Great fun from start to finish. Slick delivery contributed to the enjoyment. CH at his best.

Quite a few characters to keep track of, but a good story that had me hooked.

My first book by this author. Enjoyable and amusing at times but also occasionally slow and not as engaging as I'd have wanted. I liked some of the characters but not the style of the book.It reads to me like a news update delivered by a reporter. This dilutes any sense of emotion and kept me rather detached from the action.

A first Hiaasan for me on audio and thoroughly enjoyed it
I've no plans to go to Florida - wouldn't want to be disappointed if it turned out not to full of crackpots and whack jobs!

A leisurely time in South Florida

Carl Hiaasen’s writes with a leaning towards fun and his work is crafted is rich honour.
His stories are character driven and the various players in this drama demand a talented narrator.
The plot is sensationally interwoven with drama and thrilling set pieces as the novel unwinds. The voices have to capture the many female roles in this audio book and my only criticism being that some blur into one another. But to narrate it at all is a great achievement and the reading is poised, paced and always engaging. I would often read along listening to the book coming alive.
This is a good book and a great audio presentation that should enhance this fabulous author’s reputation and reach a wider audience.

An enjoyable way to pass the time

A pleasant tale with typical Hiaasen intricacies and enjoyable absurdities. Not his best, but nonetheless entertaining with a few of laugh out loud moments. It wasn't gripping or can't put down, it was ok.

Would you listen to Razor Girl again? Why?

Yes, I have already listened to it twice. It's funny and enjoyable to listen to.

What was one of the most memorable moments of Razor Girl?

Finding the beard in the kitchen fryer.

You can make a film out of a Car Hiaasen book they end up a bit wrong, they are too intricate to be squashed down into 1 film.