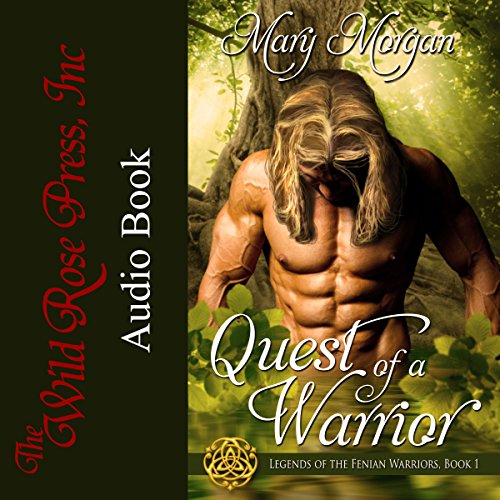 Quest of a Warrior

Quest of a Warrior

"You met them in the Order of the Dragon Knights. Now, journey to the realm of the Fae and witness their legends!"

Fenian Warrior, Conn MacRoich has traveled the Earth for thousands of years, guarding the realm between mortal and Fae. His deeds are legendary. Yet, one mistake will force him on a journey to fix a broken timeline. However, on Conn’s quest, he must face a human female who will eventually bring this ancient warrior to his knees.

When Ivy O’Callaghan inherits her uncle’s estate, she never imagines there will be more secrets to unravel, including the one she hides from the world. With the help of a mysterious stranger, she learns to trust and step out of the shadows. However, nothing prepares Ivy when she learns Conn's true identity.

As the loom of fate weaves a thread around the lovers from two different worlds, will the sacrifices they make lead them to love? Or will their secrets destroy and separate them forever?

What listeners say about Quest of a Warrior

I love this story and to actually hear it was fabulous, the narrator did a fantastic job of bringing this book alive.

Amazing! 6 Stars for the Story!

Prepare to laugh, cry and fall in love! There wasn't a moment, while listening to this book, that I didn't feel a connection to all the characters. I felt their pain and joy, their confusion and relief....It is a story about love, loss and forgiveness. Conn totally captured my heart as did Ivy. I found myself becoming so completely involved in the story that I just refused to accept the fact that there could be anything but a happy ending. Mary Morgan is an insightful and brilliant storyteller and will keep you captivated from start to finish. Jamie Dione has a wonderful reading voice and accent, perfect for this story. My only criticism however is that his female voices were lacking, unfortunately. This still did not take away from my enjoyment of this truly amazing story. Jamie was able to bring the characters to life and inflicted enough emotion when necessary to make the listening experience enjoyable. This will be an audiobook I will listen to again and again, as I will the previous audiobooks by Mary Morgan. I can’t wait for the next book in this series…hopefully we won’t have to wait too long!

Jamie Dione has the much needed Irish lilt that keeps it real. He’s a bit of a sing-song narrator but for a fairy tale, it works!

This is a well written magical tale. It took me a bit to get sucked into the story but once I did, it was hard to put it down. The story is truly a captivating tale specially after Conn meets Ivy.

Narration was fairly good and brought the story to life.

I enjoyed the visit into the Fae Realm and modern day Ireland. The character development was excellent and I felt totally immersed into the story like I was the one living it. The story is told in dual POV which is great because we get to understand where they are coming from and their true feelings. Forbidden love is always the best!

I was not familiar with this author but I’m definitely going to look at her other books. Apparently, I need to check the “Order of the Dragon Knights!” I’m looking forward to the next book in this great series!

This author was new to me, so having read my weight in mediocre fantasy romance, I wasn't expecting much. Let me just say any low expectations I may have had were blown to smithereens with this story! The writing and world building were outstanding, full of rich characters and settings that brought back a more whimsical time in my reading life when I wasn't as jaded to the "same old, same old." This is NOT the same recycled story you tend to run into as an avid reader. I'm not kidding when I tell you this author's writing is miles above some of the typical tripe I've read. And thanks to her, I believe in "fairies" again. ;) Thank you for that gift, Ms. Morgan! I can't wait to read more of your work and fall in love all over again.

I want a Fenian Warrior please!

This book pleasantly surprised me. I really enjoy Fantasy, but I’m drawn toward the adventure. I don’t mind a little romance woven into a really good plot, but not as the main focus! But this book pulled me in quickly. There is action and a story involving Fae; however, this particular story is heavy on romance. There are parts where intimacy is graphic, but not overly. I can easily be put off by that, but not here. In fact, for the first time in a long while, I actually had butterflies and became teary eyed. Honest, I rarely ever do that.

Now, the narrator... OMG! Jamie Dione has the sexiest voice I have EVER heard. Wow! Even his female voices were well done, not forced and not too high (which I find with some male narrators). But Dionne’s voice with that accent Irish? Scottish?, Gaelic? Wow! I could listen to him over and over. It was easy to imagine Conn as the sexy Fae warrior of a girl’s dream with that silky brogue.

If you enjoy Fantasy, Fae, Celtic history and romance, I would strongly recommend Quest of a Warrior. It’s the first in the Fennian Warrior series. I’m going to search for the others... especially if they are narrated by Dione. Excited!

If you enjoy Forgotten Realms books...get this!!

What made the experience of listening to Quest of a Warrior the most enjoyable?

The narrator. I feel any other narrator would not have done this story any justice! Jamie Dione did a wonderful job! The various voice changes and accents! Awesome! He really made this audio book sweep me away!

Conn. I loved everything about this character!

I felt many emotions listening to this book. The narrator did an excellent job inflicting the voice of the character with the proper emotion needed. I think the only emotion I didn't do was cry, although I did feel sadness at times.

This is a wonderful story that had me wanting to re-read my collection of Forgotten Realms books! It is that good! Ms. Morgan pulls you into this world with grace and style! I will be looking into the rest of this series!

Magical romance and a love that would not be dissuaded by any means. Conn is an ancient Fae who has never been in love until he looks at the human, Ivy and his heart is lost to her. Of course, their relationship can not be possible and nothing is easy. There is nothing Conn won't do for her. I was given this free review copy audiobook at my request and have voluntarily left this review.

Can a mistake result in love?

Conn's thousands of years of service traveling between realms to guard and fix things is ignored for one mistake. Can he make it right?

So begins his journey to help a woman now in the future. He wasn't supposed to fall in love--Fae and humans do not mix. Maybe another mistake. Only Conn and Ivy don't feel like it is a mistake.

Another romantic, time-traveling, steamy read. I met Conn in an earlier book and so wanted him to find love--yay! But nothing is that easy. What is he willing to risk to keep his love or save her? Someone is out to get her and while he wants to save her no one seems to be able to figure out who is after her or why.

Ivy's trip to accept the legacy from an uncle she didn't even know about begins this journey for her.

Expect to stretch your emotions for this one. Love in the human world may work but what about the other side of the veil?

The narration is wonderful, great accents, and the story as well. 5 stars all the way.

Once again this author has penned a tale to sweep the reader to another time and place with Conn and Ivy into the world of the Fae and Scots. Couldn't put this one down once I got started reading and am excited for this new series to continue . So awesome to hear this book after having read it. Recommend this author and book series.

Quest of a Warrior:Legends of the Fenian Warriors

Loved the characters and the plot. I’ve already purchased book two, looking forward to reading it.