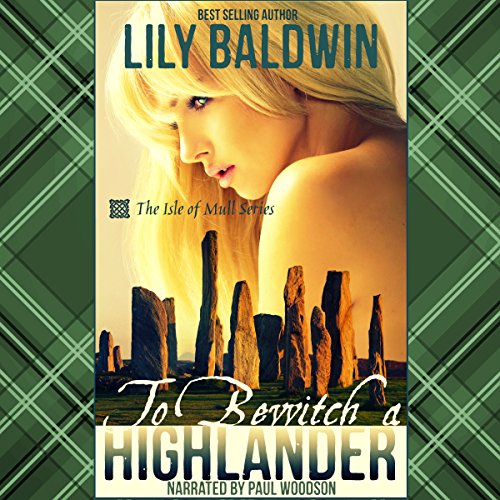 To Bewitch a Highlander

By: Lily Baldwin
Narrated by: Paul Woodson
Try for £0.00

Shoney's lightning speed with a bow captures Ronan by surprise, and their chance meeting ends with him lying unconscious at the bottom of a ravine.

When he awakens, he cannot rid his mind of her startling beauty, her valor, or the secret fear he glimpsed in her steel eyes. He vows to find her, but as the mysteries of her identity unfold, his courage and heart are tested as never before.

What listeners say about To Bewitch a Highlander

A beguiling beginning of a delicious series.

Ronan MacKinnon was the son of a Laird and was rather a hot-tempered individual. His friend and fellow warrior, Aiden, handsome, almost beautiful, was used to being chased by the village women. Aiden’s amiable personality, jovial manner and sweet nature was exactly the type of friend Ronan needed. I enjoyed the repartee and sarcasm between the two, particularly when Ronan was ready to blow a fuse and Aiden’s manner and wit inflamed and yet calmed him. There were no secrets between the two.

One day, Ronan and Aiden were on patrol seeking their enemy neighbor the MacLeans who often trespassed into MacKinnon territory. To finish the job more quickly, they split up; Aiden in one direction and Ronan in the other, to rendezvous before sunset. But Ronan didn’t make the appointment. He had slipped down a slope, cracking his head on a rock and lost consciousness. Before he slipped and fell, he was startled by the sight of a mesmerizingly beautiful young woman with flaxen hair taking aim with her bow and arrow at the same deer he was about to kill. When she saw him, her arrow redirected pointing at him. When he came to, Aiden was with him. Aiden not believing anything he said, just tried to placate his friend. Aiden figured the bump on Ronan’s head gave him this vision of loveliness and it was all a dream. However, for the next several weeks Ronan searched for this women. He saw her as alone and unprotected. He needed to help her.

The Witch of Dervaig had lived in the forest in a small hut for over a century. Ronan and Aiden couldn’t understand how she could live so long. When they saw her in the village, they would shiver with fear. These men were seasoned warriors, but the deformed, limping witch scared them beyond reason. They avoided the area where she lived and circumvented her if they saw her in the village.

The lovely vision with flaxen hair was none other than the Witch of Dervaig. Shoney was lonely, living alone since her mother had died. She had become the witch as her mother and her mother’s mother before her. Shoney was an unusual woman for she had never met a man. So when she saw Ronan, broad-shouldered, a giant of a man, she was overwhelmed. She wished she hadn’t been seen in the forest, but she had. Her mother had warned her off men. They were not to be trusted. Besides, she had learned to take care of herself and wanted no part of the Scots. However, she didn’t realize just how much a man could change a woman.

Ronan, Aiden and Shoney were all very likeable characters. Shoney was a healer, but also a seer which added depth and interest to the story. Shoney’s inner conflict of betrayal of her mother and her ancestors by falling in love with Ronan, tore at her soul. She was of the old ways, worshipping pagan gods while Ronan’s clan had a Christian belief.

Ronan knew he loved this woman, but how was she to fit into his village? If they knew she was the Witch of Dervaig they would kill her. Ronan had to have her, but how was he to keep her safe?

This was really a delicious listen. Shoney was spunky and probably as hot-tempered as Ronan. Both could give as much as they received, with Paul Woodson’s well-done narration providing the intensity of their dialog. His accents and voice nuances tied me to the listen. He had me raptly listening, experiencing the fear of being and worshipping differently in an intolerant and fearful society.

Would you listen to To Bewitch a Highlander again? Why?

I would definitely listen to 'To Bewitch a Highlander' again because I really liked the story and the animation Mr. Woodson brought to the characters.

I liked the characters and the way the author developed their relationships. I could picture all of them, even the secondary characters, and could appreciate the closeness of the clan and the villagers.

Loved his accent, first of all, and the way he could use his voice and still differentiate between the characters. There was no question as to whether characters he was reading were male or female I particularly liked his interpretation of Aidan - he always made me laugh!

Could they put centuries of fear and misunderstanding aside for love?

I will listen to more of Mr. Woodson's performances in the future. He has a great reading voice and will only improve, especially if he pays attention to minute details such as actually whispering a line when the text says "he whispered."

I would recommend it because it is a very heartfelt story.

What was one of the most memorable moments of To Bewitch a Highlander?

There were many, but one that stands out is towards the end when they returned from the war and the ship docks. The happy reunions and the mourning of the lost warriors.

Which character – as performed by Paul Woodson – was your favorite?

I think Aidan was well performed.

There was a range of emotions, I laughed, I cried, I got angry and felt anticipation.

I loved Paul Woodson's voice. He has a very pleasing voice, the reason for the 4 stars is because some places the emotion was not there. If it wasn't mentioned that the character was angry or he or she snapped back at somebody, or cried out in happiness, I wouldn't have known from the way it was narrated.

I really enjoyed listening to this book. I hope the next book is just as enthralling as the first.

What did you love best about To Bewitch a Highlander?

Very professionally done! His accent was a little different than I expected, but then I've never even been to Scotland.

He tried to make the "voice" each character sound different. I'm glad that he could do the variations.

Bewitch a Highlander by Lily Baldwin is a romantic medieval tale set in Scotland that is hard to put down. The story focuses on the unlikely friendship and eventual romance that develops between Shoney and Ronan. Shoney is the last legitimate descendant of the Picts, a pagan religious group that worships Mother Earth. Shoney, and the centuries of women before her, have basically lived a solitary life as "the witch of Dervaig" and instilled fear in the people of the village at the site of a cloaked figure.

Ronan is the son and heir to the Laird of Clan MacKinnon. He is used to females who need protection and special care. Shoney on the other hand is feisty, independent and trained to defend herself if necessary. Ronan can't help but fall in love with her. The rest of the book is Shoney struggling with being frustrated with her solitary life, while at the same time yearning to be accepted into the village. However, she is unwilling to compromise her heritage.

Paul Woodson did an excellent job narrating. He has such a wonderful voice that differentiates between the various male and female characters. He was joy to listen to and really enhanced my enjoyment of this audiobook.

This is my first Lily Baldwin book, now I will read / listen to all of her books! I absolutely loved this book. Amazing story, amazing narration!

This book was surprisingly delightful, it was full of humor, heartache, the promise of love. The narrator was not bad. This audiobook was provided by the author, narrator, or publisher at no cost in exchange for an unbiased review courtesy of Audiobook Blast."

What made the experience of listening to To Bewitch a Highlander the most enjoyable?

The story was well written and flowed wonderful. Paul brought the touching story to life.

What other book might you compare To Bewitch a Highlander to and why?

I love all audio books.

Have you listened to any of Paul Woodson’s other performances before? How does this one compare?

Yes. He does a wonderful job. The accent really brings the story to life.

Full of love, courage, and intrigue .

I enjoyed listening to Paul Woodson as he told the story. His changes in voice were wide ranged and helped me keep the characters separate. The story itself was good, and I loved both Shoney and Ronan. They are so different in most aspects but also complement each other. With visions, deaths, illnesses, and biases, there are some darker moments. Love helps conquer these and bring light to a couple, clan, and family. I recommend this story and will be looking to read the rest of the series.

I received a copy of this audiobook as a gift, and this is my unsolicited review.