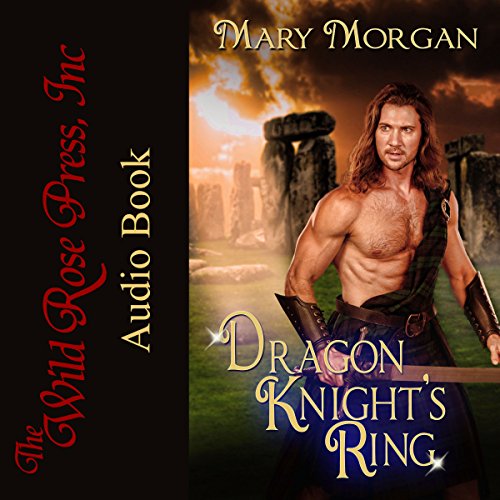 Crusader Adam MacFhearguis is on one last quest to the standing stones in Scotland, where he seeks to bury the past. However, a silent prayer sends him to an unknown future and to his beloved Meggie. When he uncovers a shocking revelation, Adam questions everything about the woman he thought he knew and loved. He may have traveled the veil of ages, but time is now his enemy.

Margaret MacKay lives a life in the future without the memories of her past - her death. When Adam arrives at her door confessing he knows her, she is confused and wary. With each passing day, she yearns to learn more from this stranger. Yet, when a truth is revealed, can she trust the man to unlock the chains from her mind and heart?

Will love free the bonds to unite the two lovers who were doomed centuries ago? Or will evil finally claim victory over the Dragon Knights?

I have read the book and to be able to listen to this is fabulous, i was transported into the highlands and got lost in the magic

Time Travel Romance At Its Best!

I absolutely loved this story and know I will go back and listen to it, and to the previous books in this series, again and again in the future. Adam and Margaret’s story is emotional, exciting and filled with unexpected twists and turns. It was so emotional when Adam realized that his love was still alive but didn’t know him. I loved the way the author handled this storyline and little Jamie was a delight. Mary Morgan has a gift for taking you into the story and making you feel like you are right there watching the characters in person. The good characters in this entire series were enchanting and I found myself caring for them all. The villain was so evil you could feel the emotional pull of wanting him caught. I was delighted to read Adam’s note at the end of the book. I just am not ready to let go of the Dragon Knights! I have thoroughly enjoyed this entire series. Jamie Dione does an outstanding job with the narration. His voices and inflections are wonderful and he made it an enjoyable listening experience. I have no qualms recommending this book or any of the other books in this series; they are all well worth the cost or a credit!

Adam has paid the price for love over centuries. He helped reunite the four brothers' dragon knights and find their true loves. Yet he lost his love when an evil night had begun their separation. He'd taken their sister to wed knowing their families were enemies. She'd died—or had she.

With his travels through the veils of the centuries, he finds she lives. She is in the future and doesn't know of her past and Adam. Can he woo her and find a life with her after all? Without her past memories can he make her remember and love him again?

I was so glad to see Adam and Meggie find a chance for love and life together. He spent so much time and effort righting the past he deserved a happy future. I love the story, the narration.

The Dragon knights have another tale to be told and to travel through the veils of time . Adam MacFhearguis finds his Meggie again but can her heart be won. Warning: be sure to have a comfortable seat and snacks when starting this book because you may forget the passage of time as you listen to this tale. I will miss these knights but one never knows how the Fae will grant another wish.

This book was given to me in exchange for an unbiased review.

This story starts with Adam, Scott turned crusader, after losing his one true love to death by her brother's sword. Giving up his faith in the Fey, he turns to Christianity, only to find out the crusades were just as corrupt. Adam returns home and discovers his brothers have now befriended the McKays, even after they have also killed his older brother.

He also finds out he is to be the next Dragon Knight. While riding to release his frustration he is transported to another time. In this time he finds Meggie...alive.

Margaret McKay has no memories. it's up to Adam to help her remember who she is. She doesn't remember him but she's attracted to him on a soul deep level.

Not only has Adam traveled across the veil of time, so has another evil. It's out to destroy all that is good and make way for the Dark One.

This is a story of Romance, magic and battles rolled up into one. I really enjoyed the book but I think I would have been more in tune with the characters had I read the previous books of this series. This is book 5 so there are things that get lost if you start with this one, however it doesn't take very much away from the story. To me this book reads like Harlequin romance novels, which I really like and grew up reading. The narrator did a great job, I really like his voice. I highly recommend it.

I got this book via audiobook boom and this is my voluntary review. This book started off in one way then shifted to another. I was taken on a ride from one frame of reference to another then switched time and the circumstances took another twist. The story that was presented to me was interesting and twisted. The conclusion was good and overall I enjoyed the entire story.

A wonderful ending to an exciting series

My Thoughts: Adam MacFhearguis is a man torn. Torn in so many ways and the perfect hero. He wants to do the right thing because of love. Founded in the magic of the highlands and the old ways, he searches for answers in the new religion, for the old religion didn’t save him from losing his Meggie. He seeks a God who could forgive him for letting Meggie, his true love die, for he can’t forgive himself.
For three long years he searched and only found more devastation at the hands of religion while battling in the Crusades. His soul reaches out to Meggie, even in her death he seeks her. Returning home from the Crusades, he goes to the standing stones and remembers all of that awful day and wishes for the impossible. The Fae deem to give him that chance.
At the day of Meggie’s death, her blood spilt on sacred soil, the Fae transported her to the future, 2016, where she was given life with no memories of her past. At the same time, Adam became the 5th Dragon Knight, appointed so by the Fae. He knows nothing of this until he has a conversation with Meggie’s brothers. In frustrating desperation, he goes to the standing stones and remembers all of that awful day and wishes for the impossible. The Fae deem to give him that chance.
He knew it was a foolish request, since he no longer believed in them, but in his heart, Meggie did, so he said the words for her. “Can ye not bring her back, Fae? If only to see her face one more time, he uttered softly.
Bringing the ring to his lips, Adam placed a kiss on the red stone before tucking it away in this pouch, belted at his waist.
As the tortured knight knelt at the foot of the standing stones, Adam’s quiet, broken prayer whispered across the Highlands to another realm. And in that moment, when she heard his sorrowful plea, the Guardian granted him his request.
But now there are greater issues, two realms of beings are at stake. Lachlan, the evil one, plots with The Dark One to take over the world. Will Adam help her remember in time for Meggie holds the key. She must trust Adam, remember who he is and regain the key to destroy Lachlan in time!
The race to have her remember, her frustration, the changing of all time if she doesn’t remember, is the propelling energy in this exciting tale, where evil will change all that is known if the calculations of the Dragon Knights and three rogue Fenian Warriors are not correct. The Fenian Warriors are willing to forfeit their lives to save both the realm of the Fae and humans -- a true and noble quest of their own. Will they be powerful enough?
I enjoyed listening to the last book of the having read an ARC copy. The narrator, Jamie Dione, is new to me. In the most part, he did the story justice. I particularly enjoyed Adam's character portrayal with his emotion ready to explode while he gains control of his new power.
Ms. Morgan’s stories torture the heart, gouge the soul, then uplift the spirit soothing and healing what she’s destroyed. But you say, it’s make-believe! It’s just a fantasy of the mind! Dear reader, I was there, I saw it all. I’m a believer.

I loved this story! This book was full of emotions. The narration was superb and gave the story that extra flair, it really kept you entertained. This author did a great job with the characters builds and plot. This was my first book by this author but definitely will not be my last. I can't wait to read the other books in this series! I was given this free review copy audiobook at my request and have voluntarily left this review.

GREAT ENDING TO A WONDERFUL SERIES

REALLY ENJOYED HOW MARY MORGAN BROUGHT THIS GREAT SERIES TO A JOYOUS END BUT STILL HOPE SHE CONTINUES TO INTERTWINE THE DRAGON KNIGHTS, FAMILY AND FAE INTO UPCOMING STORIES.
SHE HAS ALSO INTRODUCING ME TO A LOT OF ENJOYABLE NARRATORS, I HAD NEVER LISTENED TO JAMIE DIONE PRIOR TO THIS BOOK AND AM PLEASED TO SAY HE DID NOT DISAPPOINT ME.
I WILL LOOK FORWARD TO THE NEXT BOOK

I love time travel romances.
This was a very interesting story. I wish I had read the other books in the series but there were enough references included so you could understand what was happening.

The narration was excellent. Very easy to listen to.