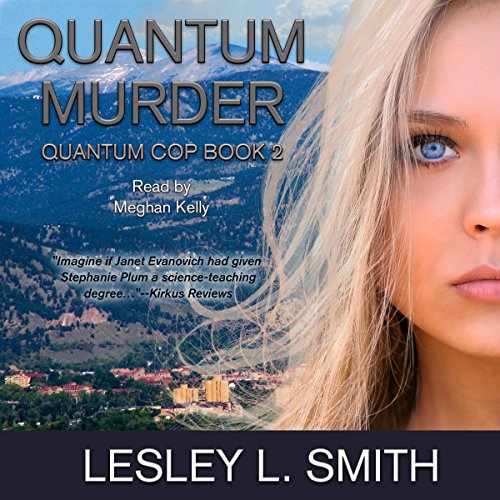 When someone's murdered, seemingly via her discovery, physicist Madison Martin knows it's her responsibility to bring the killer to justice. Madison resumes her quantum cop role to help the local cops and the F.B.I. investigate everything from quantum panty raids to impossible heists and increasingly bizarre murders. As the q-crimes increase, she worries that reality itself is a goner.

When Madison's nearly obliterated in a quantum duel, she realizes she can't handle it by herself. But this leads to another problem: does her overworked task force include the very criminal she's trying to catch? And if so, can she take him down before it's too late?

Enjoyable addition to the series

A great addition to a series. This book was just as enjoyable as the first book in the series. It's a interesting, creative, humorous, fun and very entertaining story with a little mystery, intrigue and murder.

You really need to listen to the series in order to understand everything. It's worth it though. Even though there is a scientific explanation given for the "ability" it didn't matter to me, once again I just let go of all reality, sat back and enjoyed the story.

Since the discovery of Q-lapsing Madison's whole life has been turned upside down. Now she's being framed/accused of murder. She's the logical suspect. Once again to save her own skin it's going to take all her detective skills and a little help from her friends and colleagues to clear her name.

Great cast of characters. Both likable and unlikable. Madison is of coarse a great character. For someone brilliant she is a scatter brain and has no common sense at times. She's a little ADHD. That actually makes her more relatable and likable. Although this time around she seemed more scatter brain and it almost got to the point of being ridiculous. Andro is also a great character.

Meghan Kelly once again does a really good job with the narration. She has a very distinct voice that is easily recognizable. Pleasant voice that is easy to listen to for long periods of time. It's also one that people either really enjoy or completely dislike. I fall in the former category. I enjoy her narration. Clearly spoken with a nice even pace. Good character voices. Both male and female. Her voice fits the lead character Madison perfectly. She brought the story and characters to life. Very enjoyable.

This audiobook was given by the author, narrator, or publisher at no cost in exchange for an unbiased review. I once again enjoyed the absent minded, clueless, valley girl, professor who leads us through our crime solving mystery. Thank you Lesley Smith for this fun adventure. Meghan Kelly is outstanding in her performance, lively and entertaining .

Quantum Murder is Book 2 in the Quantum Cop Series. Before delving into Book 2, I recommend listening to Book 1 first. The concept for the series is both interesting and original - the manipulation of reality through the application of quantum physics. When quantum crimes start up again, it's up to Madison to find the culprit.

Although I really enjoyed Quantum Murder, there were a couple of things that I found irritating. Madison's constant forgetfulness and ditzy behavior belied the fact that she was an intelligent quantum physics professor. Her boyfriend of one year was all lovey dovey one moment and rudely throwing her out of his home the next. The story itself was more complex and imaginative than its predecessor. I thought that it was obvious who the bad guy was - until I discovered that I was wrong! Don't you just love when that happens? The plot twists, combined with the wonderful narration of Meghan Kelly, created a very satisfying listening experience for me. So far, this is a really fun series and I would recommend Quantum Murder.

I received this audiobook free for an honest review. I really enjoyed this second book as well as the first. The concept is very interesting. Whether the information provided is actually physics, I have no idea. Not a science person. However, the story line was great. Trying to guess who the bad guys were was difficult. Figuring out what Madison was going to do next was difficult, which made this a great book. Although Meghan Kelly is not my favorite narrator, she did a good job with this book. Maybe it was the story that really interested me and not the delivery. Lesley L. Smith creates a great story that keeps your attention from beginning to the end.

Let me start by saying, I loved the first book and in order to understand the second book, or for that matter, the entire concept of the series, you have to read or listen to the first one. Now, although I really enjoyed the first book, I thought this one was better by far. This book had me laughing from beginning to end and I could not put it down.
The narration for both books seems to be a love it or hate it situation. Meghan Kelly does a great job giving each character a unique voice so that it's easy to follow and there's never a question of which character is speaking. However, the voice she uses for the first person narration of the main character, Madison, leaves A LOT to be desired. While listening to the first book, it really distracted me and left me wondering why she didn't clear her throat or get a drink and come back to the story. Though Ms. Kelly uses the same raspy whisper for the narration of this book, it didn't bother me in the slightest; possibly, her narration style is an acquired taste or, and this is the more likely scenario, this book was just so great that I overlooked the narration flaws and just let the characters tell me their story. Whichever the case, this series, narration and all, is definitely worth the listen! I highly recommend it and will be anxiously awaiting the next case of the Quantum Cop!
I received this audiobook at my request and voluntarily reviewed.

Who Thought Quantum Physics Could Be Fun?

I really liked this book. It was written by an author with a Ph.D. in Elementary Particle Physics. The heroine, who also has a Ph.D. in Physics, can q-lapse or shift reality. Who would have thought that would make for a fun mystery? Or course the FBI gets involved and there is a hot male Physics professor who is a sometimes love interest. This is the second book in the seris and I would recommend reading the first for continuity.
The narrator was very good.
I was voluntarily provided the free review copy by the author, narrator, or publisher for an unbiased review.

Maybe I should have read the first book in the series Quantum Cop before I read this book #2. I don't read a lot of science fiction but this sounded good. I really enjoyed Megan Kelly's narration of the story. She is what kept me listening. I did like the book once I stopped trying to figure out what quantum physics was. I was gifted this audiobook with the understanding
that I would leave an honest review.

The "can quantum physics kill" itself is the most interesting aspect of this book. It gets you intrigued and draws you in. I wish the narration was better and I could stick with it.

The narrator's voice was very high pitched through out the length of the book, to the extent I listened to. I couldn't listen to it on a headphone because it was literally giving me a headache. And even on speakerphone, the voice was hurting my ears and inducing a headache. So, I had to give up after some time.

I love all things sci-fi so I was very intrigued by the premise of this book. I had a hard time with the narrator though. I was actually surprised to read so many positive reviews for Meghan Kelly. I am in the definite minority.

The entire time I was listening to this book, I just kept hoping she would clear her throat, change her cadence or do anything to draw me in. I stopped listening. Thank goodness for Kindle.