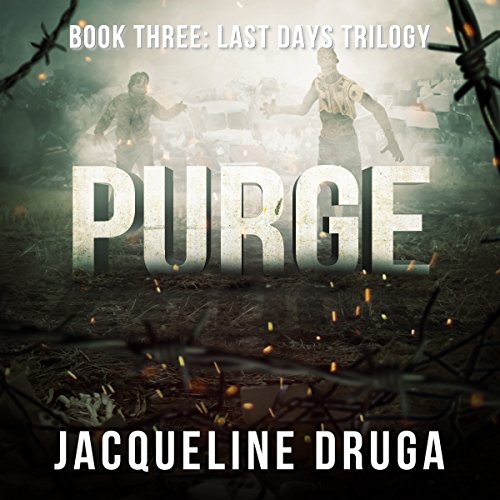 By: Jacqueline Druga
Narrated by: Rick Gregory
Try for £0.00

Purge is the third and final book of the Last Days Trilogy.

Billions of lives have perished. The earth is decimated by plague, earthquakes, and other natural disasters. All at the hand of Devante.

While life around them dies, humanity has not given up.

Led by Michael the Archangel, Reggie Stevens and Marcus Leon build an army to defeat Marcus’ greatest achievement and biggest mistake. The fate of the world and humanity are at stake if the small army fails.

Between Heaven and Hell a battle will rage for the very souls of all humanity. The battleground is Earth. Mankind must take its final stand, the horrifying battle has begun.

What listeners say about Purge

This is the final in the trilogy and as sees Devante waging war on anyone opposed to him. Meanwhile, Marcus, Reggie and Michael are trying to build their own army to save humanity and destroy Devante. But what will the price be and will they be too late?

I really liked book 1, loved book 2 and was eagerly awaiting this one! And while I enjoyed this a lot, I felt a little let down with the final battle, which I'm not going to talk about because there would be major spoilers!!! All I'll say is that the final fight was a little too easy!

Other than that, this was well written, action packed and engrossing. There were plenty of other battle scenes that were full on and had me eagerly listening to the story. Reggie and Michael were so fun when they were interacting. Michael was hilarious at times and it added much needed levity to the overall good vs evil thing.

In all, this series was really good. It was a unique story line and held my attention the whole way through. I can't wait to check out more from this author.

Rick Gregory did a great job as always. I really liked the way he did Michael and his female voices were good. I did find that some of his male voices were very similar and it took me a few seconds to realise who was talking.

Great way to end the trilogy. The battle was good and the ending, although sad, was fitting. Glad to see that Reggie continues to be the bad-ass she was in the last book. Got a little tired of her complaining about not having a sword, but the resolution to that was fantastic. Really enjoyed how everything came together. Each book seemed quite different and this one was perfect for the ending. Keep in mind this needs to be heard in order and I’m happy to say there is no hook ending leaving it open for another.
Things got a little weird for me between Michael and Reggie. I wasn’t really sure what the whole point of his desire to be intimate with her was. As a point of explaining how he was not human but took on human aspects I can get, but it just got creepy and didn’t portray how I would want an angel to behave when they descend to defeat evil. I want something more like Michael from the movie Legion. Prefer a bad-ass over an emotional train wreck. I definitely prefer Devante over Michael, he didn’t have the weaknesses that I felt Michael has. I have to say I loved how Michael called everyone a jerk not knowing what the actual meaning was.
Rick Gregory did a great job with the narration. I have always enjoyed his character voices and he continues to do a really great job. Ricks different in tone between Devante, arrogant and pompous, and Michael, foolish yet confident, is perfect. He really nails those characters. Glad he was the narrator for the entire series.
I was voluntarily provided this free review copy audiobook by the author, narrator, or publisher.

This is the last part of a series.It's the end of the world.Davante ,the clone turned antichrist,is waging war.He has demons,etc on his side.Humanity has Michael,the archangel.James is just a messenger.Again Marcu,clone maker,s is made to stay away from his love.This is the part I really dn't understand.Lilian comes back into Kile and Reggies life with dire consequences.
I liked some parts of this book.Michael and Devantes personalities were non existant Rick Gregory did a great job narrating.I was given this book by the narrator,author or publisher free for an honest review.

This is an awesome conclusion to this trilogy. This biblically apocalyptic trilogy is definitely among my favorites. This final book is where the action is, the final battle between good and evil! Mankind must defeat Devante and his army from Hell to save humanity. Outstanding narration by Rick Gregory!

This is the third and final book of this series. I have enjoyed all 3 books but this is by far the best. It involves the preparations of Marcus and Regina as they attempt to pull together survivors and build and train an army to challenge evil.

There are many obstacles that must be overcome and quite a few personal issues that are encountered. The author was not shy about scattering death and destruction around but much of the book was written with humor also.

The narration of this book was also outstanding. The way the humorous parts were emphasized and the ability to use different voices for the people were well done.

I enjoyed this book and look forward to more books by this author and narrator.

This book was provided free with the expectation of an honest review.