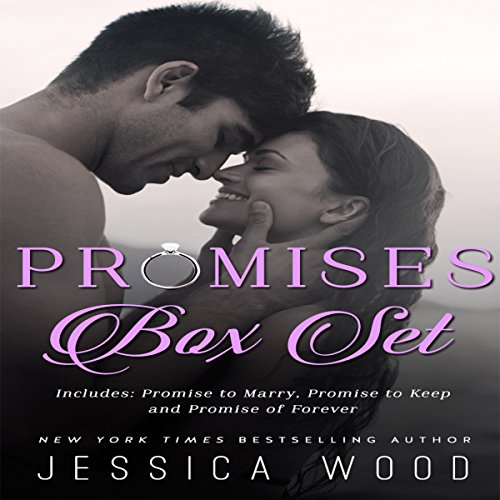 By: Jessica Wood
Narrated by: James Cavenaugh,Carly Robins
Try for £0.00

This is not your cookie-cutter childhood best friend love story.

This is the complete box set of the Promises series, which includes:

We were best friends since as early as I could remember. We grew up together. We were next door neighbors. We shared each other's deepest secrets. When I was 13, we made a pact: If we were still single by the time we were 30, we'd marry each other.

Today was my 30th birthday. I was single. I knew he was single too.

But we were no longer best friends, and a part of me knew that he hated me.

I've loved her since we were seven. We were best friends. We even made a pact to marry each other if we were both still single at 30. I grew up thinking I would always love her for the rest of my life.

Today, nine years after the day that broke us apart, we are both 30 and single, and fate decided to intervene. I finally discovered that the reasons behind her betrayal were far different from the ones I'd created years ago in my mind.

Now I'm torn between my hatred over what she did and my undying love for the one girl who I've held close to my heart for most of my life.

But is the truth enough for me to forgive her?

But that was before I discovered a secret that seemed to shatter everything I'd come to believe in. Had I lost him before he was ever mine? Had this secret ruined any promise of a forever together?

New adult contemporary romance with mature content. Recommended for 17+ due to mature language and adult situations.

Great audible great narrators the only down side is the author going back and forth everything else I loved about this story!! Narrators did a fabulous job. At one point I started to cry this story line hits right in the heart at one point in our lives we all go through what this couple went through.

When the second book came around, I did not like Jacks at all and felt sorry for Chloe. Jacks was a selfish jerk who only cared about himself. I couldn't understand how he could say he loved Chloe but was okay with sleeping with woman after woman and telling her to do the same thing. It really didn't make any sense. He didn't love her too much if he was okay with it. The whole thing about his dad was a little weird. His dad was a disgusting man and I was grossed out by his actions toward Chloe when she was a child and when she was an adult.

I thought the third book was a little over the top and a little to dramatic. Seriously, Chloe and Jacks jumped to way too many conclusions without asking Aunt Betty for the truth. Who does that? It was totally dumb and useless to the book.

In conclusion, I found that these 3 books should have been made into one book by keeping books one and two, taking out the first part of book 3 and putting in the last part of book three. It's kind of ridiculous for it to be three books.

I found the narration to be good. I like Carly Robins and James Cavenaugh was really good too.

Let's start by saying that I decided to read / listen to this book and purchased the audio. I'll go short and simple here for people looking to expend a credit; full review for all stories will be available at Exquisitereviews.com

This is a perfect example of a story that has promise and could have been so much more.

I like the storyline, not the way the story was told.

I think the author missed on a lot by not going in the order in which the events were happening and going back to the past to explain. And in the explaining she went over the top forgetting the audience and the inner questions.

I did a mixed rating here for purpose of the audible. The performance was good so 4 stars to their narration since the narrators are working with what they got.

The story 2 stars because in romance novels you need to give your audience more than sex and a reason to move forward with the book had all over. Again the timeline in which the story was told.

Overall 3 stars because the way this book was written it could have easily be one single one.

So with all that; don't waste a credit if what I mentioned will bother you. Read the past reviews of you want spoilers because there are plenty.

This was beautiful love story. I loved it. However, I didn’t like how the story was told. I hate when the story is told from present to the past. At first I didn’t care because the story was good. But I kept waiting to the present day. It came VERY slow and this ruined my focused. When the present day came, I lost interest in the story. This should have been five stars. I had to give a four instead.

Best love story I have listened to in a long time

Great story and great performance by readers which is so important to the story. The story has lots of twists and turns which had me taking my phone every where I went. Didn’t want to miss anything!

I really loved this series it had everything a HEA should have along with some unforseen bumps on the the way . I never guessed it would end as it did. I will read more of this authors books and tell my friends and family about this series.

Narrators were the only reason I finished

Awful story about terrible people. I only stayed with it until the end because I adore Carly Robins. Don't waste your credits on this trash. I wish I hadn't and I do not intend to read anything else from this author.

The series hits home with dual perspectives, interesting plot twists and a HEA ending. The background and in-depth character storylines is methodically done. You feel like you truly know these characters. I will listen to this story again and again.