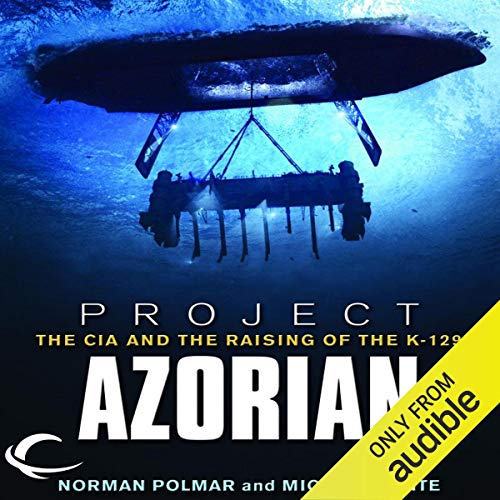 Despite incredible political, military, and intelligence risks, and after six years of secret preparations, the CIA attempted to salvage the sunken Soviet ballistic missile submarine K-129 from the depths of the North Pacific Ocean in early August 1974. This audacious effort was carried out under the cover of an undersea mining operation sponsored by eccentric billionaire Howard Hughes.

Azorian, incorrectly identified as Project Jennifer by the press, was the most ambitious ocean engineering endeavor ever attempted and can be compared to the 1969 moon landing for its level of technological achievement.

Following the sinking of a Soviet missile submarine in March 1968, U.S. intelligence agencies were able to determine the precise location and to develop a means of raising the submarine from a depth of more than 16,000 feet. Previously, the deepest salvage attempt of a submarine had been accomplished at 245 feet. The remarkable effort to reach the K-129, which contained nuclear-armed torpedoes and missiles as well as cryptographic equipment, was conducted with Soviet naval ships a few hundred yards from the lift ship, the Hughes Glomar Explorer.

While other books have been published about this secret project, none has provided an accurate and detailed account of this remarkable undertaking. To fully document the story, the authors conducted extensive interviews with men who were on board the Glomar Explorer and the USS Halibut, the submarine that found the wreckage, as well as with U.S. naval intelligence officers and with Soviet naval officers and scientists.

The authors had access to the Glomar Explorer’s logs and to other documents from U.S. and Soviet sources. The book is based, in part, on the research for Michael White's ground-breaking documentary film, Azorian: The Raising of the K-129, released in late 2009. As a result of the research for the book and the documentary film, the CIA reluctantly issued a report on Project Azorian in early 2010, even though they tried to withhold details that were in that brief document from the public record by redacting one-third of it. In this book, the story of the CIA’s Project Azorian is finally revealed after decades of secrecy.

How did the Russians not know at the time?

I work in the maritime industry as well as touching the outskirts of the U.S. Navy now and again and recently met a couple of guys that had been on the heavy lift ship and indeed talked briefly about it but were not very descriptive. Another good book to read that touches on this is called Red November. The details of how all this came about is very fascinating, Norman Polmar in his style always creates and atmosphere of interest, excitement to keep you interested, and also a style that leaves you without a lot of questions. I think most Americans of my generation, baby boomers, have a fascination of Howard Hughes and as we look back on those decades of the 1950s and 1960s we wonder what else was going on back then that we have yet to hear about.

Although the book is short, it is packed with information not previously accessible to the public. As a fan of Cold War history I had read much about Azorian or "Project Jennifer" as it was known prior to 2010. Never in my dreams had I thought that my kids would eventualy see pictures of K-129's wreckage, much less myself. Norman Polmar, whose books are the best you can read on submarine history is an amazing author and does not dissapoint in this book (or in any of his others). The narrative of the people who actualy developed the Glomar and the Barge also makes for anamazing insight of the project. All in all a great read on an amazing chapter of Cold War history and one of my favorite books.