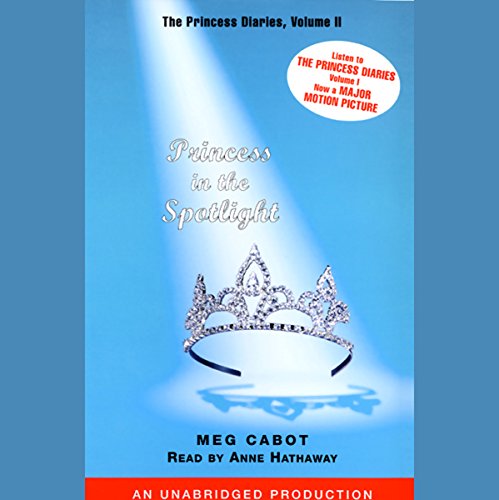 Princess in the Spotlight

Just when Mia thought she had the whole Princess thing under control...

Things get out of hand, fast!

Since Mia's the brand-new crown princess of Genovia, indomitable dowager princess Grandmere arranges a national primetime interview for her. With just a few innocent remarks, Mia manages to enrage her best friend Lilly, practically get one of her teachers fired, and alienate the entire country of Genovia. (Population 50,000, but still!)

There's the havoc of the interview's aftermath and her dreaded princess lessons at the Plaza. Plus an unexpected announcement from her mother, and intriguing, exasperating letters from a secret admirer. Mia is swept up in a whirlwind of royal intrigue the likes of which hasn't been seen since the first of The Princess Diaries.

What's an heir to the royal throne to do?

"With thoughtful presentations and credible accents, Hathaway develops characters varying from pompous European royals to Mia's country grandparents. It's a hilarious journey fit for the whole family." (AudioFile)
"Listeners who loved the first volume will be equally pleased with this one." (Booklist)

What listeners say about Princess in the Spotlight

Meg Cabot Reminds you what it means to be young.

My neice's love these books as do I. Meg Cabot is very good at understanding teen angst and issues. The on-going Princess story is a great and original one.

Where does Princess in the Spotlight rank among all the audiobooks you’ve listened to so far?

10 out of 10. I love all the accents of Anne Hathaway and I really loved it. My mom loved listening to it with me!

It was about a Princess... what else!

The audio sounds like it was recorded in a tunnel

Good story, but the audiobook noise over the audio is awful. I recommend this book, it's cute and entertaining.

I enjoyed hearing the next step to Princess Mia's journey. I appreciate all the voices Ms. Hathaway is able to perform. Great Job!

I did not enjoy this book that much because it had so many inappropriate concepts, i would reccomend this book for 12 and up

A bit on the short side

Just after finishing the first book of this series I was certainly ready to get to the next one. Like usual the movies are never exactly like the books, but these have the same appeal. I love Anne Hathaway as the narrator, mostly because I love her, but also because she quite literally was Mia Thermopolis. It's like you get to here her tell you all the juicy details in her diary, and that's great while driving alone. It has really kept me alert, almost like someone is taking to me the entire time.
The only downside is I thought this book was a little on the short side. However, this will not be stoping me from continuing the series. I get a wonderful sense of nostalgia every time I get to read a bit of these books (I recall in my preteens picking these up at book fairs but never really retained any of the information).
Still a good read if this style of book is your thing.

A little more mature than the first, so I'd recommend for girls 8th grade and up.